You are here: Home › physics › Theodore Maiman and the Invention of the Laser 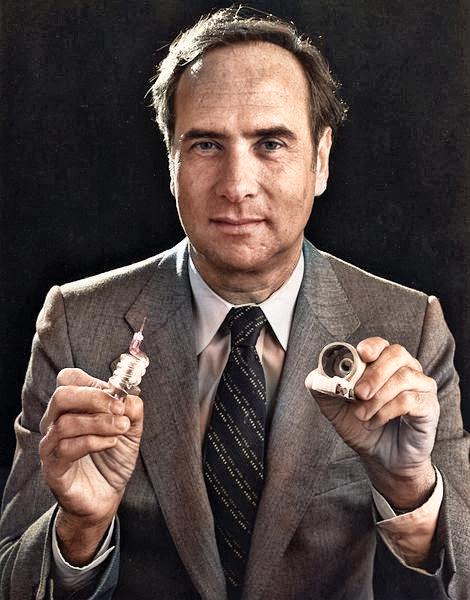 On May 16, 1960, American physicist Theodore Maiman presents the world’s first operating laser at Hughes Research Laboratories, Malibu, California. Today, lasers are present everywhere, ranging from common consumer devices such as DVD players, laser printers, and barcode scanners to professional laser devices for surgery and various other skin treatments, or in industry for cutting and welding materials. Actually, it was Albert Einstein, who has laid the theoretical foundations for the laser in his 1917 paper Zur Quantentheorie der Strahlung (On the Quantum Theory of Radiation).[6]

Lasers have become a part of our daily lives not only in technical devices, but also in the science fiction culture that would not be the same without the simulated Light Amplification by Stimulated Emission of Radiation. Actually, the predecessor of the laser was the maser. It operated at microwave frequencies and firstly after the laser was invented, it was called an optical maser.

The Idea Dates Back to Einstein

But, to explain the origins of the laser, we have to go back a few years. Albert Einstein published his work ‘Zur Quantentheorie der Strahlung’ (On the Quantum Theory of Radiation) in 1917 in which he explained the concept of stimulated emission. In his theory, a “photon interacts with an excited molecule or atom and causes the emission of a second photon having the same frequency, phase, polarization and direction“. In the 1950’s several scientists in the United States and Russia simultaneously developed the maser despite the skepticism that spread through the scientific community. Prominent physicists like Niels Bohr [7] or John von Neumann [8] criticized that the maser was violating the uncertainty principle by Heisenberg and could never be working.[9] 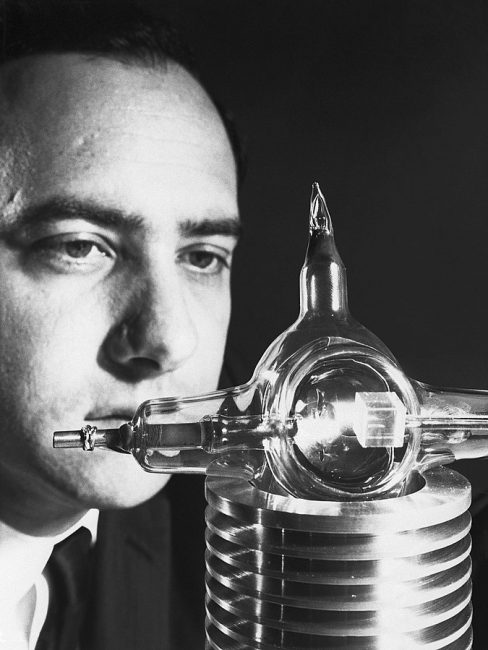 Maiman with his laser in July 1960

In 1928 Rudolf Ladenburg succeeded in proving this experimentally. Afterwards it was puzzled for a long time whether the effect could be used to amplify the light field, since a population inversion had to occur to reach the amplification. However, this is impossible in a stable two-level system. First a three-level system was considered, and the calculations resulted in a stability for radiation in the microwave range, realized in 1954 in the maser of Charles H. Townes, which emits microwave radiation. Afterwards Townes and Arthur L. Schawlow, among others, worked on the transfer of the maser principle to shorter wavelengths.

The next steps towards the laser were made in 1957, when infrared laser research began at Bell Labs, but soon moved on to visible light. It was then Gordon Gould just two years later to introduce the term LASER in his published work followed by years of lawsuits considering the right of the patent between Bell Labs and Gould. Finally, in 1960, Theodore Maiman was able to demonstrate the first working laser. This step depicted an important contribution to physics and beyond. The first laser – a ruby laser – was completed by Theodore Maiman on 16 May 1960. He first submitted a description of his device to the Physical Review Letters, which, however, refused to publish his manuscript. The equally high-ranking journal Nature accepted the manuscript and published it in August 1960, with the result that Maiman’s invention was quickly copied by other researchers in many variations.  After Maiman, several physicists worked on improvements of his achievement and brought the laser to what it’s capable of today. Now, numerous of laser types such as gas lasers, chemical lasers, fiber lasers or photonic crystal lasers exist, all varying in wavelengths and their applications.

The first semiconductor lasers were developed in the 1960s (Robert N. Hall 1962, Nick Holonyak 1962 in the visible spectral range, Nikolai Basow), but only practicable with the development of semiconductor lasers based on heterostructures (Nobel Prize for Herbert Kroemer, Schores Alfjorow). In the late 1980s, semiconductor technology enabled ever more long-lived, highly effective semiconductor laser diodes to be used with low power in CD and DVD drives or in fiber optic data networks, gradually replacing the ineffective lamp excitation of solid-state lasers as pump sources with powers up to the kW range.

Maiman was the son of electrical engineer Abraham Maiman who worked for AT&T. Maiman’s father was an inventor who also improved the stethoscope. Maiman sr. would have liked his son to become a doctor, but he chose physics. Maiman studied at the University of Colorado and Stanford University. He was interested in technological devices at very early age, since his father was an electronics engineer and inventor. He studied engineering first at the University of Colorado and then at Stanford University, where he received his doctorate in physics in 1955. Nevertheless, he was not interested in an academic career, but rather in basic research. So he first worked for Hughes Research Laboratories, a California aerospace manufacturer owned by eccentric billionaire Howard Hughes. The company was then a hotbed of innovation that owed its productivity to military orders and a staff of exceptional scientists. Maiman first developed a miniaturized version of the measles, a precursor to the laser, and then wanted to concentrate light rather than microwaves. Due to discouraging reports from other research institutes, his superiors banned him from further laser research. However, his threat of resignation and private work on the laser led to his giving in and he was granted a budget of 50,000 US dollars and an assistant for nine months. However, since Hughes still did not support the development of the laser sufficiently, Maiman left Hughes Research Laboratories and founded his own company Korad Corporation in 1962. He received the U.S. patent on his work on November 14, 1967.

After his invention Maiman worked in the field of nonlinear optics and founded further companies dealing with the development of lasers and their applications. Maiman was awarded the Wolf Prize, the Japan Prize, he was nominated for the Nobel Prize twice, and was induced to the inventor’s Hall of Fame. He also published ‘The Laser Odyssey‘, in which he describes the long way leading to his invention.

Theodore Maiman died on  May 5, 2007 in Vancouver, British Columbia, Canada, at age 79 of systemic mastocytosis, a rare genetic skin disease..