You are here: Home › physics › How Albert Einstein Revolutionized Physics 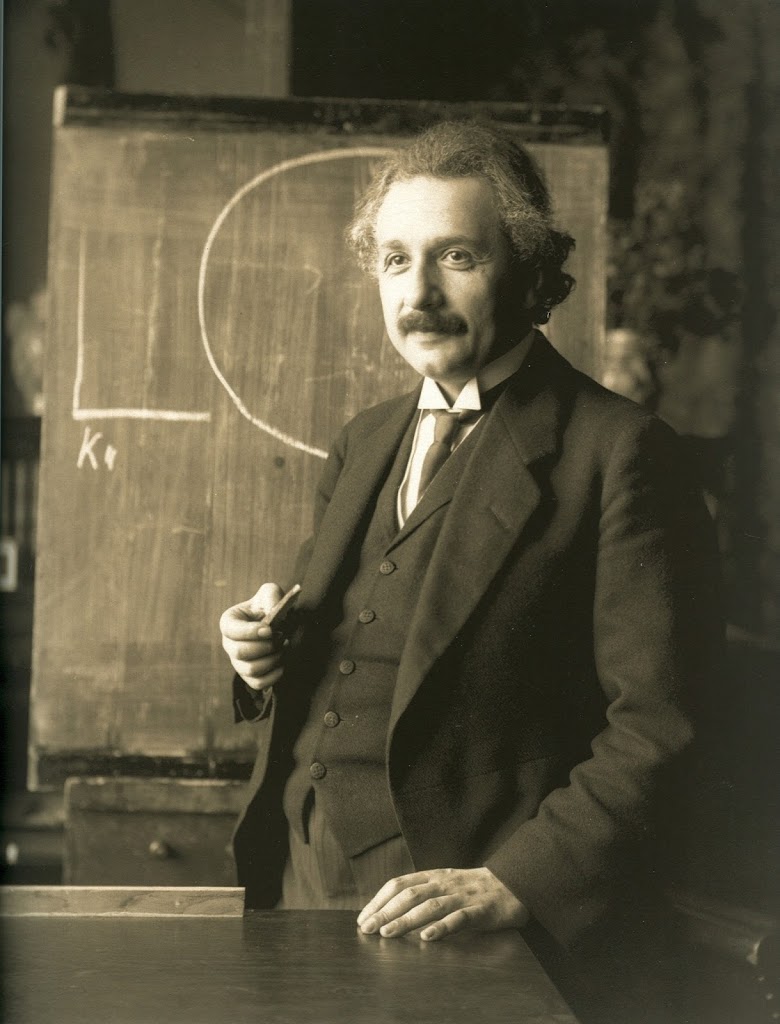 Albert Einstein during a lecture in 1921

On March 14, 1879, German theoretical physicist Albert Einstein was born, who has become an iconic figure for physics as well as science of the 20th century. He is best known for his theories on special and general relativity, as well as for the discovery of the photoelectric effect – for which he received the Nobel Prize – and he developed what has been named the most famous equation in history, the mass energy equivalence. Of course our history of science and technology (and art) blog wouldn’t be complete without mentioning Albert Einstein’s birthday. We already had several articles mentioning Einsteins work (The annus mirabilis 1905, [5]) or influence (relativity theory, nuclear fission, quantum physics, etc.). Thus, it is high time to take a closer look at the life of the most prominent scientist ever that has even become a popular icon.

“In the temple of science are many mansions, and various indeed are they that dwell therein and the motives that have led them thither.”
— Albert Einstein, Address at the Physical Society, Berlin, for Max Planck’s 60th birthday, 1918

Albert Einstein was born in Ulm, in the Kingdom of Württemberg in the German Empire on 14 March 1879 as son of Hermann Einstein, a salesman and engineer and Pauline Einstein. In 1880, the family moved to Munich, where his father and his uncle founded Elektrotechnische Fabrik J. Einstein & Cie, a company that manufactured electrical equipment based on direct current. A giftedness could not be foreseen in his youth. Thus Albert only began to speak at the age of three. At school he was a bright, sometimes even rebellious student. His achievements were good to very good, not so good in languages, but outstanding in the natural sciences. At age ten, Einstein was introduced to popular books on science, mathematical texts and philosophical writings by Max Talmud, a poor Jewish medical student from Poland and friend of the Einstein family. Among these books also were Immanuel Kant‘s Critique of Pure Reason,[7] and Euclid‘s Elements [8](which Einstein called the “holy little geometry book”).

Already at an early age, Einstein began to wonder about the world and its fundamental physical laws. A fundamental question arose in him, when considering how a light beam would look like if you could run alongside it at the same speed. If light were a wave as physics had proposed, then the light beam should appear stationary, i.e. it should look like a frozen wave. But the light beam is moving, which leads to a new paradox and to the very first “scientific paper” of Einstein already written at age 16: “The Investigation of the State of Aether in Magnetic Fields.” Nevertheless, this very question of the relative speed to the stationary observer and the observer moving with the light would dominate his thinking over the next decade and lead to his groundbreaking theory of relativity.

In 1894, in search of new business the Einstein family moved to Italy and Albert continued his education at Aarau, Switzerland. Einstein did not comply with his father’s wish to study electrical engineering. Instead, he followed the advice of a friend of his family and applied for a place at the Swiss Federal Polytechnic School in Zurich, today’s ETH Zurich. Since he did not yet have a high school diploma (Abitur), he had to take an entrance examination in October 1895, which he – as the youngest participant at 16 years of age – did not pass. He mastered the natural sciences with flying colors, but failed due to a lack of knowledge of French. In 1896, he was awarded his ‘Matura’ (Swiss high school diploma) in Aarau and entered the Swiss Federal Polytechnic School in Zurich to be trained as a teacher in physics and mathematics.

A Hindrance for the Problem-Oriented Physicist

“It can scarcely be denied that the supreme goal of all theory is to make the irreducible basic elements as simple and as few as possible without having to surrender the adequate representation of a single datum of experience.”
– Albert Einstein, “On the Method of Theoretical Physics” The Herbert Spencer Lecture, delivered at Oxford (10 June 1933)

With his idiosyncratic nature, he was often disgusted. Abstract mathematical education was a thorn in his side, and he considered it to be a hindrance for the problem-oriented physicist. In the lectures, he attracted the teaching professor’s attention mainly due to his absence. For the examinations he relied on the notes of his fellow students. This ignorance did not only obscure his career opportunities at his university, he regretted them at the latest when developing the mathematically highly demanding general theory of relativity. His fellow student Marcel Grossmann was of great help to him later on.

At the Patent Office

In 1901, the year he gained his diploma, he acquired Swiss citizenship. Because Einstein often preferred to study on his own, he had cut classes about what some of his professors became very angry. Among them, Heinrich Friedrich Weber, wrote a letter of recommendation at Einstein’s request that was responsible for denying him for every academic position that he applied to after graduation. Thus, Einstein had to accepted a position as technical assistant in the Swiss Patent Office in Bern, where his lifelong friend Marcel Grossmann had recommended him. During his studies, Einstein had met his fellow student and later wife, Mileva Maric from Novi Sad.[9] After the death of his father at the end of 1902, the two married in Bern on 6 January 1903 – against the will of the families.

1905 should become Einstein’s so-called “miracle year”(annus mirabilis)[5]: at the age of 26 years he submitted a paper for his PhD (Eine neue Bestimmung der Moleküldimensionen) and had four groundbreaking papers published in the best known journal of Physics, the Annalen der Physik. The four papers are dealing with the photoelectric effect (Erzeugung und Verwandlung des Lichts betreffenden heuristischen Gesichtspunkt), Brownian motion (Über die von der molekularkinetischen Theorie der Wärme geforderte Bewegung von in ruhenden Flüssigkeiten suspendierten Teilchen), special relativity (Zur Elektrodynamik bewegter Körper), and the equivalence of matter and energy (Ist die Trägheit eines Körpers von seinem Energieinhalt abhängig?). All of them have altered the course of modern physics and finally brought Einstein to the attention of the academic world – but this is already another story. 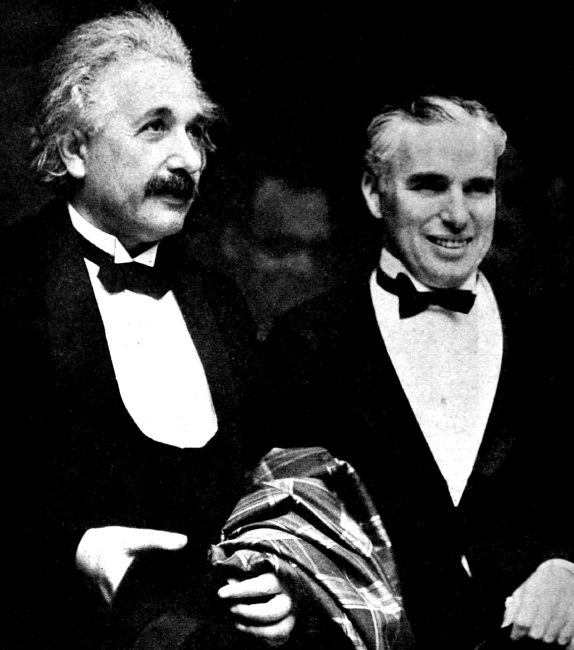 Einstein (left) and Charlie Chaplin at the Hollywood premiere of City Lights, January 1931

Einstein was offered a series of positions at increasingly prestigious institutions, including the University of Zürich, the University of Prague, the Swiss Federal Institute of Technology, and finally the University of Berlin, where he served as director of the Kaiser Wilhelm Institute for Physics from 1913 to 1933. Einstein received the teaching qualification at the Berlin University, but without any obligation to do so. Freed from all teaching activities, Einstein found time and tranquillity in Berlin to complete his great work, the general theory of relativity, which he was able to publish them in 1916, together with a work on the Einstein-de-Haas effect.

During the solar eclipse of 29 May 1919, Arthur Eddington‘s observations confirmed that the distraction of a star’s light by the gravitational field of the sun was closer to the value predicted by the general theory of relativity than that of Newton’s corpuscle theory.[10] The Nobel Prize for Physics of 1921 was not awarded until November 9, 1922: to Albert Einstein “for his merits in theoretical physics, especially for his discovery of the law of photoelectric effect“. Einstein left the prize money to his divorced wife and her two sons. 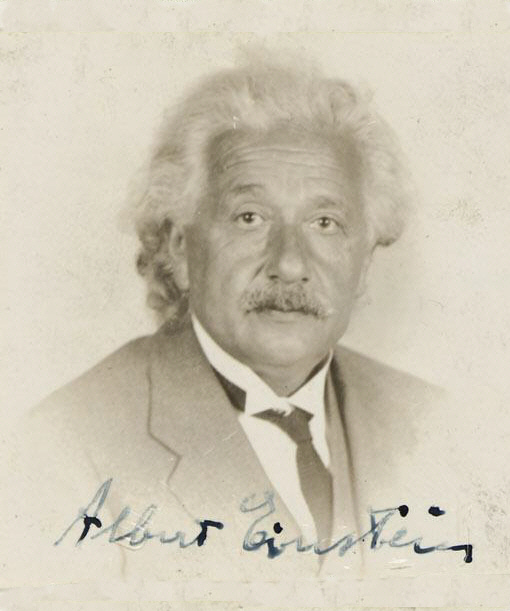 Albert Einstein’s Emigration to the U.S.

In February 1933 while on a visit to the United States, Einstein decided not to return to Germany due to the rise to power of the Nazis. He took up a position at the Institute for Advanced Study at Princeton, New Jersey, which would last until his death in 1955. There, he soon developed a close friendship with German mathematician Kurt Gödel,[11] who accompanied him on long walks together discussing their work. During this period in Princeton, Einstein tried to develop a unified field theory and to refute the accepted interpretation of quantum physics, both unsuccessfully.

“Life is like riding a bicycle. To keep your balance you must keep moving.”
— Albert Einstein, Letter to his son Eduard (5 February 1930)

Ramamurti Shankar, Einstein for the Masses, [13]