You are here: Home › art › The World of Lyonel Feininger 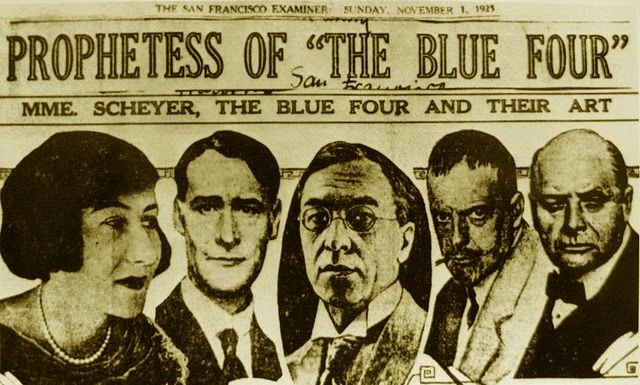 On July 17, 1871, German-American painter Lyonel Charles Feininger was born. He became a leading exponent of Expressionism and especially Cubism.

Lyonel Feininger was born into a family of musicians. His father was the famous German violinist and composer Karl Feininger and his mother, Elizabeth Feininger was an American pianist and singer. Feininger himself visited Germany for the first time at the age of 16, when his parents gave several concerts in Europe and he was allowed to stay in order to attend an art school in Hamburg. He continued his studies at ‘Königliche Akademie’ in Berlin one year later and started drawing for newspapers and publishers in the area. Feininger decided to leave Germany and enrolled at the Académie Colarossi in Paris. It was also in Paris, where Feininger met Robert Delaunay and Henri Matisse in 1906 and in the same year he published the famous newspaper comics “The Kin-der-Kids” and “Wee Willie Winkie’s World“, which appeared in the Chicago Sunday Tribune. The strips were noted for their great humor and graphic experimentation. He also worked as a commercial caricaturist for 20 years for various newspapers and magazines in both the USA and Germany.

The artist began creating ‘serious’ fine arts at the age of 36 and got the chance to exhibit his works at Paris’ “Salon des Artistes Indépendants“. It is assumed that shortly after, Feininger gathered his first experiences with cubism. He met numerous famous artists at this point and became associated with German expressionist groups, like “Die Brücke“, “Novembergruppe“, “Gruppe 1919”, “Blaue Reiter“, and “Die Blaue Vier“. His very first solo exhibit was at Sturm Gallery in Berlin in 1917 where he exhibited 45 paintings and 66 other works. When Walter Gropius founded the Bauhaus in Germany in 1919, Feininger was his first faculty appointment, and became the master artist in charge of the printmaking workshop. In this period, Feininger spent most of his summer vacations at Benz, on the German island of Usedom, where he was highly inspired. Feininger continued paining pictures of Benz for all of his life, even after returning to the United States.

In 1921, while still teaching at Bauhaus, the artist also composed a fugue and moved to Dessau in 1926 in order to work at the newly established Bauhaus school. However, Feininger and his family had to leave Germany in 1937 as the situation with the growing Nazi Party became unbearable for them, the party declared his work to be “degenerate”. The Nazis confiscated almost 400 of his works from public collections and exhibited them as “degenerate art” in Munich after he had already moved to the United States.

Andreas Platthaus: An American in Berlin — What Kept Lyonel Feininger?, [11]