You are here: Home › art › Henri Matisse in the Rush of Colors 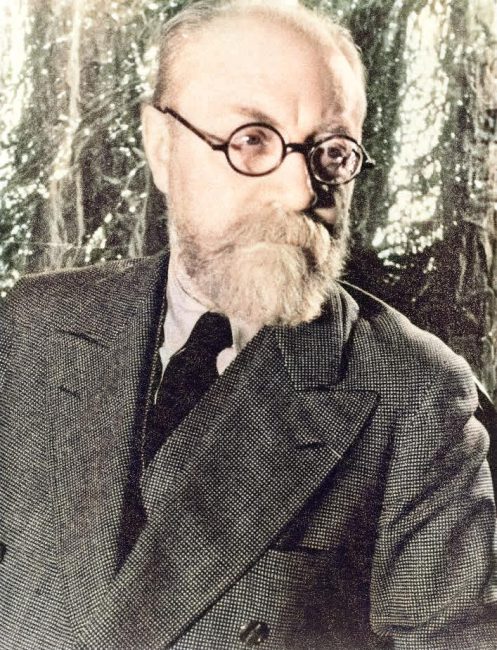 On December 31, 1869, Henri-Émile-Benoît Matisse, French draughtsman, sculptor, writer and artist, known for his use of colour and his fluid and original draughtsmanship, was born.

“What I am after, above all, is expression. Sometimes it has been conceded that I have a certain technical ability but that, my ambition being limited, I am unable to proceed beyond a purely visual satisfaction such as can be procured from the mere sight of a picture. But the purpose of a painter must not be conceived as separate from his pictorial means, and these pictorial means must be the more complete (I do not mean complicated) the deeper is his thought. I am unable to distinguish between the feeling I have for life and my way of expressing it.”
— Henri Matisse, Notes d’un Peintre (Notes of a Painter) (1908)

Henri Matisse, son of Émile Matisse and his wife Héloïse, née Gérard, was born on the grandparents’ farm in Le Cateau-Cambrésis, France. His parents ran a drugstore and a seed shop in Bohain-en-Vermandois, where Matisse grew up. The father wanted his eldest son to take over the parental business. After attending the humanist Henri Martin Grammar School in Saint-Quentin between 1882 and 1887, however, Henri decided to study law in Paris for two years. During a brief period as a paralegal at Saint-Quentin in 1889, Matisse attended drawing classes at the École Quentin de la Cour in the morning hours. In 1890, after an appendectomy, the consequences of which tied him to his bed for a year, he began painting. He gave up his legal career in 1891, returned to Paris and joined the Académie Julian, where the salon painter William Adolphe Bouguereau, among others, taught to prepare for the entrance examination to the École des Beaux-Arts. However, he did not pass it.

Matisse also attended the École des Arts décoratifs (School of Applied Arts), where he met Albert Marquet, with whom he had a long friendship. In 1895, after passing the entrance examination to the École des Beaux-Arts, both became students of the Symbolist painter Gustave Moreau, in whose class they had already been accepted as guest students in 1893.

He was soon busy painting numerous still-lifes and landscapes traditionally and was introduced to Impressionism and the back then unknown Vincent van Gogh in the late 1890’s by the artist John Peter Russell, whom he visited in Belle-Île, an island at the Bretonic coast. This deeply influenced Matisse and his knowledge concerning colors and various painting methods. A typical paining of this period depicts the ‘Vase of Sunflowers ‘ from 1898, the year of his wedding with Amélie Noellie Parayre. The same year he visited London on the advice of Camille Pissaro [7] to study the works of William Turner.[6]

Matisse attended evening classes at the Académie Rodin in 1900 and worked under the direction of the sculptor Antoine Bourdelle, initially with little success. Due to a lack of income – his wife’s modist business did not generate enough income to make a living and the children often had to be left to their grandparents – he was in a serious financial crisis and took up work as a decorative painter. Together with Albert Marquet, Matisse painted garlands and frame jewellery for the equipment of the 1900 World’s Fair, which took place at the Grand Palais in Paris. The work was exhausting, so he returned exhausted to Bohain to recover. In those days, Matisse was so discouraged that he thought of giving up painting.

After Matisse had mastered his crisis he put new effort into looking for exhibitions and collectors. In February 1902 he participated at an exhibition in the newly founded gallery B. Weill, where one of his paintings was sold. His first solo exhibition took place in 1904 with the art dealer Ambroise Vollard.

The Birth of Fauvism

Matisse spent the summer of 1905 with André Derain and at times with Maurice de Vlaminck in Collioure, a fishing village on the Mediterranean. This stay became an important turning point in his work. Thus, in collaboration with Derain, a style emerged that went down in art history under the name of Fauvism. The movement received its name when the small group of like-minded painters, consisting of Matisse, André Derain and Maurice de Vlaminck, showed their paintings for the first time at an exhibition at the Salon d’Automne in Paris in the autumn of 1905, earning indignation from the public and art critics. The critic Louis Vauxcelles called the artists “Fauves” (“The Wild Animals“). His comment “Donatello chez les fauves” was published in the magazine Gil Blas on October 17, 1905 and became widely used. This painting style focuses on strong colors combined with the realistic elements from the Impressionism era. This movement lasted for only about four years but depict an important period in Matisse’s life who was able to exhibit his painting ‘Woman with a Hat‘ at the Salon d’Automne in Paris. The work faced diverse criticism, but was later sold to the art collectors Gertrude and Leo Stein. 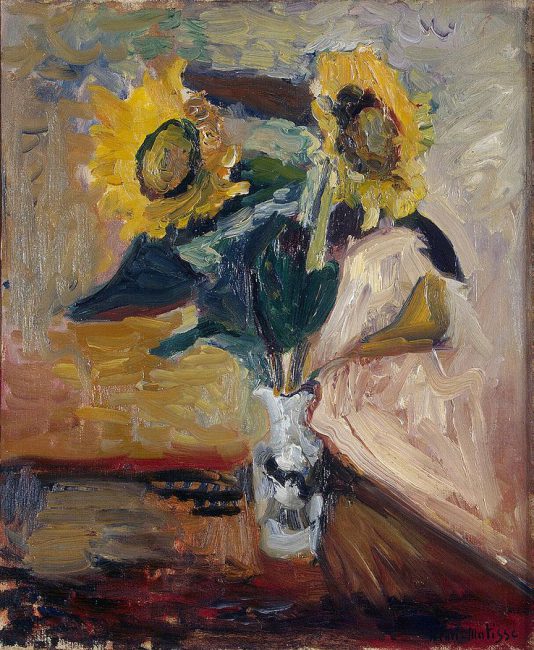 A great impact to Henri Matisse’s career was the younger painter Pablo Picasso, a great friendship evolved between the enthusiastic artists after meeting for the first time at the Paris salon of Gertrude Stein.[8] Even though their paintings differed enormously from each other, they were able to influence each other’s works and paintings like ‘The Dessert: Harmony in Red‘ by Matisse were characteristic for this period. Since that time he has been associated with Picasso by a friendship based on creative rivalry and mutual respect.

“Matisse has such good lungs. I mean the way he applies the paint. If you find three tones in Matisse’s work that are close together – say, a green, a purple, and a turquoise – then their combination conjures up another color that you could call the color. This is called the language of colours. […] The fact that there is a certain red spot in one of my paintings is not the essence of the painting. The picture was painted independently of that. You could take away the red, and there would still be the picture. But with Matisse it is unthinkable that you could suppress a spot of red […] without the picture immediately collapsing.”
– Pablo Picasso about Henri Matisse

In the late 1910’s, Matisse left Paris for the French Riviera and created works characteristic for their relaxing mood like ‘Odalisque with Arms Raised‘. At the instigation and with the support of his admirers, Michael, Sarah, Gertrude and Leo Stein as well as Hans Purrmann, Marg and Oskar Moll and others, he founded a private painting school which received his name: “Académie Matisse“. He taught there from January 1908 to 1911 and finally had 100 students from home and abroad. 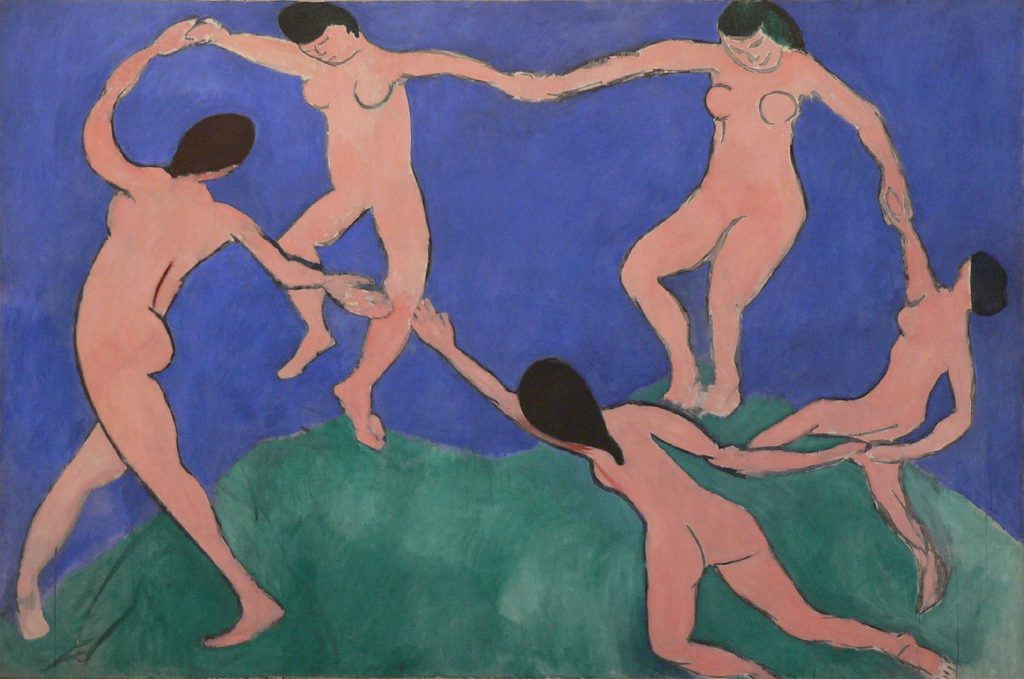 Matisse was in Paris at the beginning of the First World War in August 1914. He signed up for military service, but his request was rejected. The horrors of that time brought Fauvists and Cubists, who had previously been divided by artistic conflicts, closer together again, so Juan Gris lived with the teacher of the children of Matisse. His Cubist influence increased Matisse’s inclination towards geometric simplification.

Even though his health situation began to worsen, Matisse was still highly active with his paintings and created his famous ‘Blue Nudes‘ series. In 1941 Matisse had to undergo a severe bowel operation in Lyon. He stayed in the clinic for almost three months, then two months with the flu in the hotel. He suffered from cancer of the duodenum and two subsequent pulmonary embolisms. His last major work was the interior design of the glass windows of the Chapelle du Rosaire de Vence.