You are here: Home › architecture › Walter Gropius – Founder of the Bauhaus School 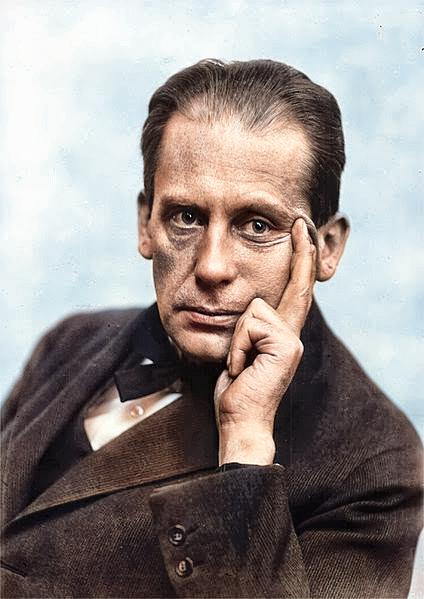 On May 18, 1883, German architect and founder of the Bauhaus School Walter Gropius was born, who is widely regarded as one of the pioneering masters of modern architecture.

“Art itself cannot be taught, but craftsmanship can. Architects, painters, sculptors are all craftsmen in the original sense of the word. Thus it is a fundamental requirement of all artistic creativity that every student undergo a thorough training in the workshops of all branches of the crafts.”
— Walter Gropius, as quoted in Paul Klee, 1879-1940 (2000) by w:Susanna Partsch, p. 47

Walter Gropius was not the first architect in the family. Indeed already his father and great-uncle, who was a pupil of Karl Friedrich Schinkel, enjoyed this profession.[5] In 1903 Gropius began to study architecture at the Technical University of Munich, which he continued at the Technical University of Charlottenburg from 1906, but left without a diploma in 1908. In the same year he joined Peter Behrens‘ office,[7] where other architects, including Ludwig Mies van der Rohe [8] and Le Corbusier,[9] who later became famous, had worked alongside him. After working at Behrens for two years, Gropius became self-employed in 1910 as an industrial designer and architect. In the same year he joined the Deutscher Werkbund through Karl Ernst Osthaus. This experience really influenced Gropius. Utilitarianism in architecture is characterized by modern industrial design in which a building’s shape is primarily given by its function. In the early years of his work, Walter Gropius began working on collaborative projects like a shoe factory in Berlin. He was always concerned to keep the modern style combined with providing comfortable and healthy working conditions for the people laboring inside.

The Bauhaus in Weimar

But Gropius not only practiced his modern architecture, he also made several publications with numerous images of his style and future ideas on industrial buildings, which had a great influence mostly in North America. During the First World War Gropius served as an NCO in the reserve. He was seriously wounded during his four-year assignment on the Western Front and was awarded the Iron Cross. Gropius’ presumably biggest career chance occurred in 1915. Henry van de Velde, a school master of an Arts and Crafts institution in Weimar had to quit and recommended Walter Gropius to be his successor. Walter Gropius transformed the institute into the world famous Bauhaus school. Bauhaus was probably one of the biggest architectural movements and special in Europe’s history. Germany was just defeated in World War I and many architects and designers longed for a new style and new shapes away from the emotional designs of Expressionism to simpler and more rational works. Gropius was highly influenced by William Morris, who always stood for ‘simple’ designs that reflect the building’s function in any way. And indeed, the Bauhaus style lacks of any kind of ornamentation and transports a harmony between practical purposes and beauty to the masses.

“The mind is like an umbrella – it functions best when open.”
– Walter Gropius, as quoted in The Art of Looking Sideways by w:Alan Fletcher, p. 129

When Gropius became the director of his school, he set his goals to design buildings for all without class distinctions, which also reflects the name of his movement, Bauhaus. It references to a building and a premodern guild in order to honor the craftsmen and to reduce the barrier between them and contemporary artists. The Bauhaus school soon attracted numerous renowned architects and later also painters and sculpturers teaching, practicing and distributing the movement adapting to the rapidly changing world of a growing mass production and technology.

Walter Gropius and fellow architects of the Bauhaus completed several buildings in Berlin like the Sommer house and the Otto house in Jena, and raised the movements attention during the design competition for Chicago’s Tribune Tower. 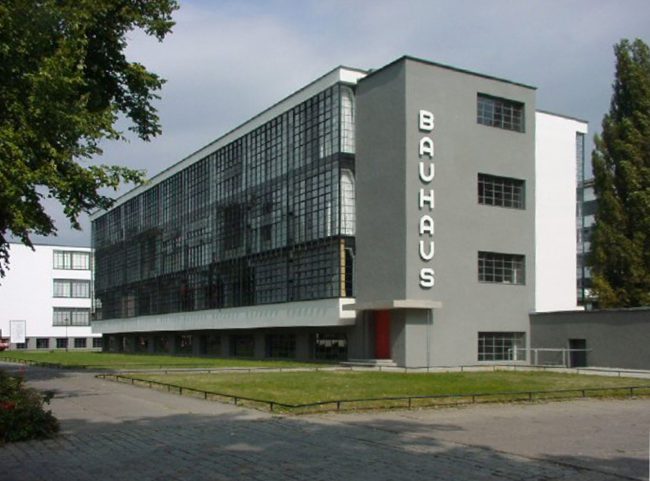 The Bauhaus building in Dessau, Germany

Unfortunately, due to a raising political pressure on Walter Gropius and his school in Weimar, the school moved at first to Dessau, and later to Berlin before being closed by the Nazi regime. Gropius successor as director of the school was the Swiss architect Hannes Meyer in 1928, who retired in 1930 and moved to the Soviet Union for the next six years. Ludwig Mies van der Rohe led the Bauhaus until its closure in the early days of National Socialism in 1933.

Emigration to England and the USA

In 1934, after National Socialist attacks on the Bauhaus, Gropius emigrated to England as the “Church of Marxism” and in 1937 to the USA in Cambridge, where he was professor of architecture at the Graduate School of Design at Harvard University. From 1941 to 1948 Gropius worked closely with Konrad Wachsmann, who began his career as a freelance architect through the house of Dr. Estrich and the Einsteinhaus Caputh. Among other things, they developed and produced the well-known General Panel system.

In 1946, Gropius founded The Architects Collaborative, Inc. (TAC) as an association of young architects, which should also become a manifesto of his belief in the importance of teamwork. One work of this team is the Graduate Center of Harvard University in Cambridge (1949/1950). His book Architecture – Ways to an Optical Culture is a plea for creativity and teamwork in the service of society.

In between the years of its existence, the Bauhaus school went through a development of its own style moving straightly towards functionality. After the school was closed, its influence however remained in all thinkable forms of art. In the last years of his life Gropius was again frequently active in Berlin, where he built a nine-storey apartment block in the Hansaviertel as part of the Interbau in 1957. Not all of Gropius’ works were uncontroversial. Critics complained that he sometimes went too far in his efforts to industrialise and standardise construction: it was not the needs of the residents that determined the floor plans, but the course of the cranes’ rails; bathtubs were placed between the sink and stove; windows could not be opened completely; the copper house settlement in Finow, for example, would also speak neither aesthetically nor functionally. Gropius’ idea of a “construction kit on a large scale” laid the foundation for prefabricated buildings in the satellite cities of the world. On the one hand, industrial mass production made it possible to provide urgently needed housing; on the other hand, it made housing anonymous and created new social problems.