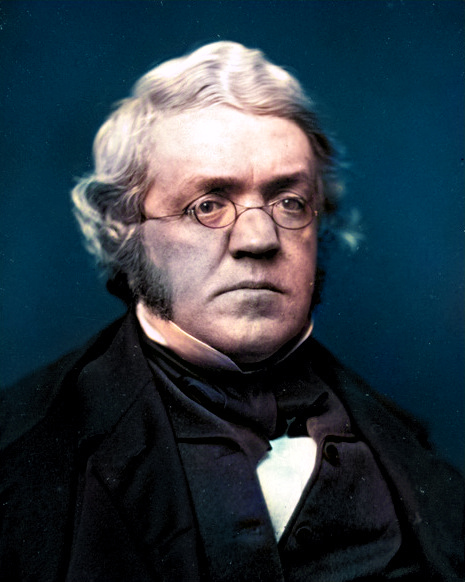 On July 18, 1811, English novelist William Makepeace Thackeray was born. He was famous for his satirical works, particularly Vanity Fair, a panoramic portrait of English society. During the Victorian era, Thackeray was ranked second only to Charles Dickens, but he is now much less read and is known almost exclusively for Vanity Fair, which has become a standard fixture in university courses and has been repeatedly adapted for movies and television.

“Let the man who has to make his fortune in life remember this maxim. Attacking is his only secret. Dare, and the world always yields: or, if it beat you sometimes, dare again, and it will succumb.”
William Makepeace Thackeray, The Luck of Barry Lyndon (1844)

Thackeray, an only child, born in Calcutta, India, where his father Richmond Thackeray was secretary to the board of revenue in the British East India Company. William’s father died in 1815, which caused his mother, Anne Becher, to send him to England, where he was educated at schools in Southampton and Chiswick and then at Charterhouse School. In 1829, he went to Trinity College, Cambridge, but never too keen on academic studies, he left the University already in 1830, though some of his earliest writing appeared in university publications The Snob and The Gownsman.

He travelled for some time on the continent, visiting Paris and Weimar, where he met Johann Wolfgang von Goethe.[4] After his return to England and a futile trial to study law, by age 21 he came into his inheritance but he squandered much of it on gambling and by funding two unsuccessful newspapers, for which he had hoped to write. Forced to consider a profession to support himself, he turned first to art, which he studied in Paris, but did not pursue it except in later years as the illustrator of some of his own novels and other writings.

Everything changed after he married in 1836. Now he began “writing for his life”, as he put it, turning to journalism in an effort to support his young family. He primarily worked for Fraser’s Magazine, a sharp-witted and sharp-tongued conservative publication, for which he produced art criticism, short fictional sketches, and two longer fictional works, Catherine and The Luck of Barry Lyndon, where he explored the situation of an outsider trying to achieve status in high society. Later, he began writing for the newly created Punch magazine, where he published The Snob Papers, later collected as The Book of Snobs, a work that is responsible for the modern meaning of the word “snob”. In 1836 he married the Irish woman Isabella Shawe in Paris. The marriage produced three daughters, including Anne Thackeray Ritchie, who became a writer herself.

In the early 1840s Thackeray had some success with two travel books, The Paris Sketch Book and The Irish Sketch Book, the latter marked by its hostility towards Irish Catholics. However, as the book appealed to anti-Irish sentiment in Britain at the time, Thackeray was given the job of being Punch’s Irish expert, often under the pseudonym Hibernis Hibernior. He remained “at the top of the tree”, as he put it, for the rest of his life, during which he produced several large novels, notably Pendennis, The Newcomes and The History of Henry Esmond, despite various illnesses, including a near-fatal one that struck him in 1849 in the middle of writing Pendennis. 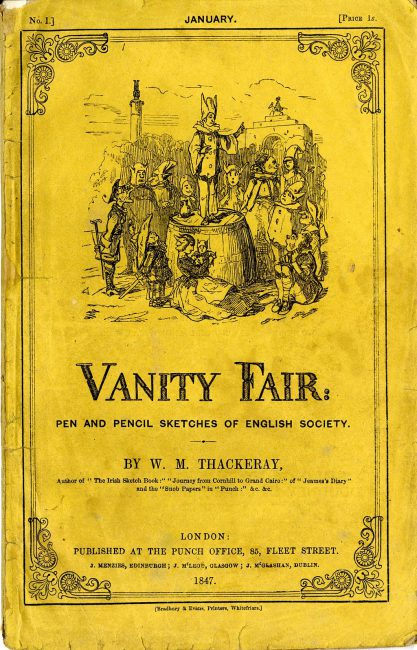 The cover of Vanity Fair: Pen and Pencil Sketches of English Society, No. I, printed by Bradbury & Evans for Punch

Vanity Fair – A Novel without a Hero

“The world is a looking-glass, and gives back to every man the reflection of his own face. Frown at it, and it will in turn look sourly upon you; laugh at it and with it, and it is a jolly kind companion; and so let all young persons take their choice.”
– William Makepeace Thackeray, Vanity Fair (1847/48)

Unfortunately, tragedy stuck his personal life, when his wife became mentally ill. She eventually deteriorated into a permanent state of detachment from reality, unaware of the world around her, and she ended up confined in a home near Paris. Thackeray became a de facto widower, never establishing another permanent relationship. It was in 1847, his novel Vanity Fair: A Novel without a Hero was published, which made him a celebrity, equal of Dickens. In that novel he was able to satirise whole swaths of humanity while retaining a light touch. It also features his most memorable character, the engagingly roguish Becky Sharp. Unlike Thackeray‘s other novels, it remains popular with the general reading public. As a social novel Vanity Fair offers a multifaceted picture of London society at the beginning of the 19th century that includes all social classes and is characterized by its ironic style and precise depiction of the characters and their characters.

His high social standing was also reflected in his membership of four of the most prestigious British clubs, namely the Athenaeum, Travellers, Garrick and Reform Club. Thackeray’s health worsened during the 1850s and he was plagued by a recurring stricture of the urethra that laid him up for days at a time. He could not break his addiction to spicy peppers, further ruining his digestion. On 23 December 1863, after returning from dining out and before dressing for bed, Thackeray suffered a stroke and was found dead in his bed.