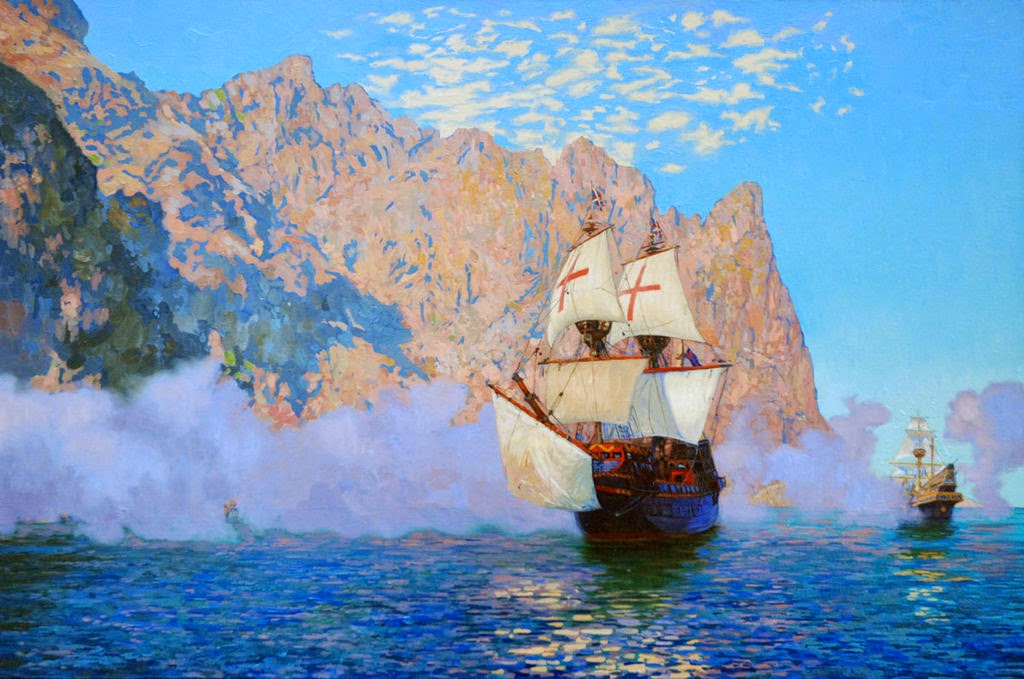 On June 17, 1579, English explorer Sir Francis Drake raised a claim for a new land that he thought he had discovered during his circumnavigation of the world and named it “Nova Albion“. But he was not the first. Already in 1542, Spanish conquistador Juan Rodríguez Cabrillo had landed there and raised a claim for the Spanish crown. He founded a place he called San Miguel, later renamed to San Diego. But, it should take a while until the land on the Pacific coast should become more interesting for the European colonists under the name “Alta California“, today’s state of California.

In his early years, Francis Drake was apprenticed to his family’s neighbor, who was the master of a barque used for coastal trade transporting merchandise to France. He became incredibly satisfied with the young man’s work and bequeathed the barque to Drake at his death. Drake began his very first journeys to the Americas, when he was only 23 years old and he was trapped by the Spaniards in the Mexican port of San Juan de Ulúa, but managed to escape. Further journeys to the West Indies may have followed in the early 1570s, but only little is known about them.

In 1577, Francis Drake was appointed to start an expedition against the Spanish along the Pacific coast of the Americas. He departed in Plymouth in November, facing bad weathers soon. Drake and his crew were forced to take refuge in Falmouth, Cornwall, from where they returned to Plymouth for repair. The crew left again in December with over 160 men and additional ships. However, they faced new hardships during their crossing of the Atlantic Ocean and lost several men already. He made landfall at the gloomy bay of San Julian at today’s Argentina. There, they had to burn their ship Mary and decided to remain the winter before attempting the Strait of Magellan. The only three remaining ships then sailed towards the southern tip of South America and the crew made it to the Pacific where one ship was destroyed in storms, which caused another return to England, leaving the Pelican which continued its journey to the south. His lone flagship was renamed to Golden Hind in honor of Sir Christopher Hatton. They sailed north along the Pacific coast of South America, attacking Spanish ports and pillaging towns. Some Spanish ships were captured, and Drake used their more accurate charts. Near Lima, Drake captured a Spanish ship with a great amount of gold on board and he chased down another ship that proved to be his most profitable capture.

After these ‘achievements’, Drake turned north in order to find and raid another ship, but instead, he landed on the coast of California on 17 June, 1579. There, he landed, repaired and restocked his vessels, then stayed for a time, keeping friendly relations with the Coast Miwok natives. He claimed the land in the name of the Holy Trinity for the English Crown, called Nova Albion. It is also assumed that he left several men there in order to found a small colony. However, in the 1540, the wester coast of North America had been partially explored by Juan Rodriguez Cabrillo, who sailed for the Spanish, but as England was in conflict with Spain, Drake decided to claim the region. Spain had claimed the entire Pacific coast of the Americas since the Inter caetera papal bull of 1493, reinforced in 1513 when Vasco Núñez de Balboa formally claimed all lands adjoining the Pacific Ocean for the Spanish Crown.[4] However, England did not recognize the authority of the Inter caetera and Balboa’s claim covered a vast and mostly unknown area.[5]

However, Francis Drake was knighted after his return in 1581. But, in order to keep an uneasy peace with Spain, and to avoid having Spain threaten England’s other claims in the New World, Drake’s logs, charts, and other writings were confiscated. The discovery and claim of New Albion was then considered a state secret.