You are here: Home › history › Cleopatra – The Myth about Egypt’s Last Pharaoh 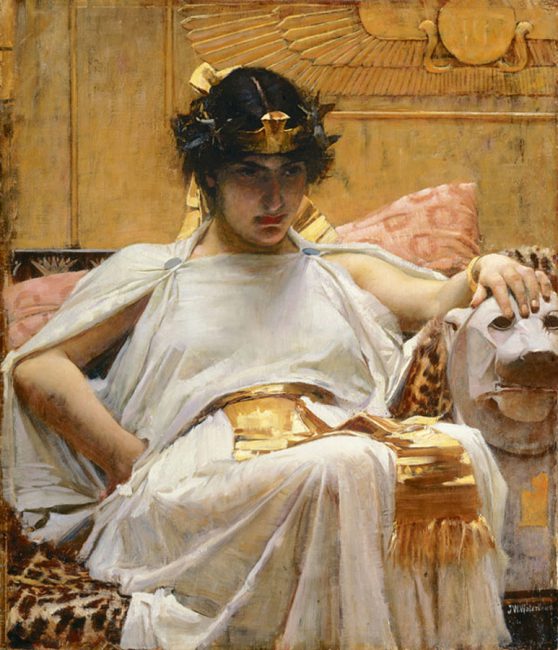 On August 12, 30BC, ancient Egyptian pharao Cleopatra VII Philopator, known to history simply as Cleopatra, passed away under mysterious circumstances. After Julius Caesar‘s [5] assassination in 44 BC, she aligned with Mark Antony in opposition to Caesar’s legal heir, Gaius Julius Caesar Octavianus (later known as Augustus).[6] To this day, Cleopatra remains a popular figure in Western culture. Her legacy survives in numerous works of art and the many dramatizations of her story in literature and film.

Through her father Ptolemy XII. Neos Dionysus († 51 BC) Cleopatra VII was a descended from old Macedonian nobility. Her ancestor Ptolemaios I had been an officer of Alexander the Great. Her year of birth – 69 B.C. – is derived from Plutarch‘s statement that she died at the age of 39 years. She was one of five children of Ptolemy XII. Cleopatra was known to be a highly intelligent woman. She received a good education and spoke about a dozen languages. Egypt was heavily dependent on Rome for power politics at the time. Therefore, when Ptolemy XII was expelled from Alexandria by an uprising in 58 BC, he went to Rome to gain support for his reinstatement as ruler. It is uncertain whether Cleopatra accompanied her father to Rome or – like her siblings – remained in Egypt.

The Last Queen of the Ptolemaic Dynasty

As a Roman cavalry leader, Cleopatra’s later lover Mark Antony contributed significantly to the violent reintroduction of Ptolemy XII and probably saw for the first time the 15-year-old Cleopatra, who was said to have fascinated him even then. When her father died, Cleopatra was 18 years old and started her political career as the last Queen of the Egyptian Ptolemaic dynasty along with her younger brother Ptolemy XIII whom she married due to Ptolemaic tradition. The siblings began long lasting fights concerning their regency. When Julius Caesar came to Alexandria, he demanded both to quit their fight and to accept their father’s will.

“Her beauty, as we are told, was in itself not altogether incomparable, nor such as to strike those who saw her; but converse with her had an irresistible charm, and her presence, combined with the persuasiveness of her discourse and the character which was somehow diffused about her behaviour towards others, had something stimulating about it. There was sweetness also in the tones of her voice; and her tongue, like an instrument of many strings, she could readily turn to whatever language she pleased…”
– Plutarch, in Life of Antony

When Cleopatra met Caesar, it is said that they started an affair very soon and his political as well as personal support increased Cleopatra’s situation. Still, the atmosphere was tense, and when Ptolemy XIII found out about his sister’s affair, the situation escalated and let to the Siege of Alexandria, which he lost. Cleopatra was now the only ruler and gave birth to her son Ptolemaeus Caesar, after her lover left. The Alexandrians called him Caesarion, i.e. “little Caesar”. Caesarion is considered by much of modern research to be Caesar’s only biological son, although some ancient and modern authors doubted his paternity. The Roman general, however, recognized Caesarion as his son and never officially contradicted fatherhood. However, he did not appoint Caesarion as his heir, but made his grand-nephew Gaius Octavius (the later Emperor Augustus) his adoptive son and heir by will. He did not marry Cleopatra either, since he was already married to the Roman Calpurnia and did not want to harm his reputation any further.

The Death of Julius Caesar

Soon after the birth of her son, Cleopatra left for Rome to be with Caesar and to increase her power. She succeeded in gaining more interest from Caesar, but was mostly disliked by the other politicians. Both managed to increase each other’s political power, but when Caesar was murdered in 44BC, she had to flee back home. With the death of Caesar, Cleopatra lost her position of power in the Roman Empire. She was not mentioned in the dictator’s will, soon there were fierce battles for his succession and the queen had to fear for her own life as the object of hatred of many senators. 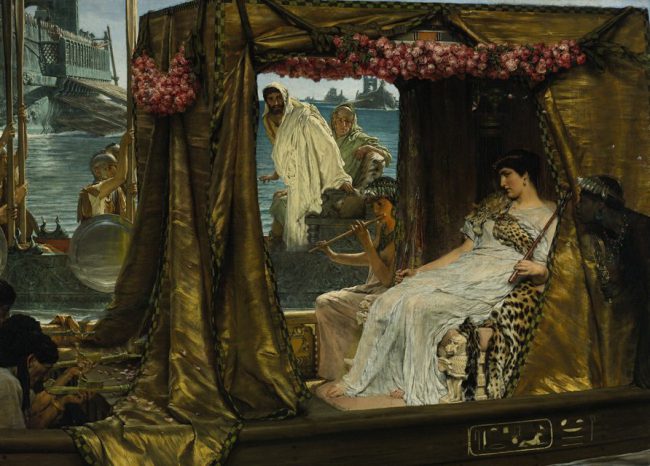 The Meeting of Antony and Cleopatra (1885), by Lawrence Alma-Tadema

The following years went by difficultly for Cleopatra. She had to fight famines and bad harvests next to the ‘regular’ political issues. In 41 BC, Mark Antony started a political and private relationship with Cleopatra. About ten years later, they combined their armies against Octavian’s forces but stayed unsuccessful. Both fled to Egypt, but Mark Antony took his life. Captured by Octavian, Cleopatra died on August 12, 30 BC under mysterious circumstances. It is mostly assumed that she took her life, but there are several possibilities how she could have done so. Some also believe that she was murdered by Octavian, but this theory is also to be proven.

“It was a pleasure merely to hear the sound of her voice, with which, like an instrument of many strings, she could pass from one language to another; so that there were few of the barbarian nations that she answered by an interpreter.”
– Plutarch, in Lives, Antony and Cleopatra, Ch. 8

The ancient authors emphasize the uncertainty of Cleopatra’s way of death. According to Plutarch, she could have been bitten by a poisonous snake hidden in the farmer’s fig basket under the leaves, but no longer found in her death chamber. Alternatively, she could have caused her death with a poisonous hair clip. Cassius Dio mentions the theories that she received a poisonous snake hidden in a water jug or bouquet of flowers or stabbed herself in the arm with a poisoned hairpin. Two tiny punctures were found on her arm. Strabo mentions a poisoned ointment as a possible cause of death in addition to the snake venom variant. Finally, the famous ancient doctor Galen believes that the queen dribbled viper venom into a self-inflicted wound.[7]

Although almost 50 ancient works of Roman historiography mention Cleopatra, these often include only terse accounts of the Battle of Actium, her suicide, and Augustan propaganda about her personal deficiencies. Despite not being a biography of Cleopatra, the Life of Antonius written by Plutarch in the 1st century AD provides the most thorough surviving account of Cleopatra’s life. Plutarch lived a century after Cleopatra but relied on primary sources. The writings of Cicero, who knew her personally, provide an unflattering portrait of Cleopatra. The Augustan-period authors Virgil, Horace, Propertius, and Ovid perpetuated the negative views of Cleopatra approved by the ruling Roman regime, although Virgil established the idea of Cleopatra as a figure of romance and epic melodrama.

Not only concerning her death, but concerning her whole life, mysteries and stories circulate around the Egyptian pharaoh. Duane Roller gave a lecture at the University of Mary Washington to solve at least some of these theories.