You are here: Home › literature › Ludovico Ariosto and the Frenzy of Orlando 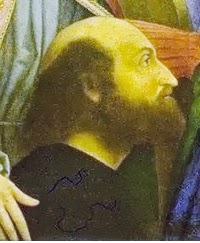 On September 8, 1474, Italian Renaissance poet Ludovico Ariosto was born. He is best known for his romance epic Orlando Furioso (The Frenzy of Orlando), which describes the adventures of Charlemagne, Orlando, and the Franks as they battle against the Saracens.[4]

“Of ladies, knights, of passions and of wars,
of courtliness, and of valiant deeds I sing.”
– Ariosto, Orlando Furioso, Canto I, stanza 1 (1532)

Ariosto was the oldest of twelve children of the little wealthy nobleman Niccolò Ariosto, who commanded the garrison of Reggio nell’Emilia in the service of Duke Ercole I d’Este (1431-1505), the ruler of Ferrara and Modena. After attending the Latin school in Ferrara from 1484, Ariosto began to study law at the University of Ferrara in 1489, at the request of his father. He did not complete it, however, but devoted himself above all to humanistic studies. He became friends with the somewhat older Pietro Bembo, the later important author, language theorist and finally cardinal.[5] With him he also shared an interest in the more recent popular Italian literature, in particular Petrarch’s poetry and Boccaccio‘s stories, as well as the writings of the Florentine New Platonists.[6,7] Thanks to his father’s position, he was granted access to the court in Ferrara, which Duke Ercole had made the capital of his domain, located between the Duchy of Milan, the Republics of Venice and Florence, and the Papal States, and expanded after 1471.

In 1493 he joined a theater group which performed plays at court. At that time he wrote the (lost) Tragedia di Tisbe. From 1495 he began to write his first Latin poems and wrote several poems in Latin language during his time as a student at the court. When his father died in 1500, he had to help feed the family, including one paralyzed brother and five sisters. He followed in his father’s military footsteps and became captain of a border fortress near Canossa. Back in Ferrara, Ariosto began working for cardinal Ippolito d’Este, who disliked the young poet, sending him to long travels and paying him desperately low wages. In the hope of receiving through him an ecclesiastical benefice that would make him financially independent, he had the Lower Orders granted to him and in 1506 was indeed assigned a benefice in a rich congregation, where, as was customary in such cases, he only needed to be present sporadically. In the service of the Cardinal he was very busy, since the Cardinal demanded constant readiness from his courtiers. Among other things, he travelled to Rome several times on his behalf. Ariost was dissatisfied with his activity. He constantly felt overtaxed, badly paid and not sufficiently recognized as a poet. However, starting from 1505, Ariosto began writing in Italian language only, publishing several sonnets and canzonas in this period. Furtherly, Ariosto began working on several prose texts comedies like La Cassaria.

Ariosto’s  hopes, under Pope Leo X, elected in 1513, who knew and appreciated him, to obtain a position in Rome and financial advantages, were not fulfilled. When Ippolito took over a diocese in Hungary in 1517, Ariost did not go with him. Rather, in April 1518 he was able to switch to the services of the somewhat more generous Duke (since 1505) Alfonso I d’Este, his brother. Also for him he was several times on diplomatic missions. At the same time, as always, he was active as a writer, e.g. with a series of verse satires (1517-25) that combine biographical, political and general human aspects. In the first, he reflects on the constraints of courtly existence and explains why he did not follow Ippolito to Hungary. In a second he polemicizes against the papal court, which had often disappointed him. In 1520 he wrote another comedy with Il Negromante (“The Necromancer“, premiered in 1528)

“Driven raving mad by love—and he a man who had been always esteemed for his great prudence.”
– Ariosto, Orlando Furioso, Canto I, stanza 2 (1532)

However, to one of his major works belongs Orlando Furioso, which he began working on at the age of 32. The first edition was released in 1516. His friend, Pietro Bembo gave him several advises considering the style in further editions. This work became very popular, Queen Elizabeth I even banned John Harrington from court until he finished the English translation in the late 16th century.  The epic takes place during the war between the Christian emperor Charlemagne and the Saracen King of Africa, Agramante. Charlemagne is besieged and Orlando, Charlemagne’s paladin failed to protect him while in love with princess Angelica. Unfortunately, she fell in love with another man wherefore Orlando traveled through Europe, destroying everything in his way. The ‘cure’ for the mad man was found by an English knight, who flew to the moon and ‘restored’ Orlando. He then fought against and killed King Agramante.

Orlando Furioso belongs to the most influential works of European literature and inspired no other than William Shakespeare’s Much Ado About Nothing as well as Lope de Vega or Góngora. Jorge Luis Borges even included a poem themed on Orlando in his collection El hacedor, in which he also explored the relationship between Orlando Furioso and the Arabian Nights.[8] 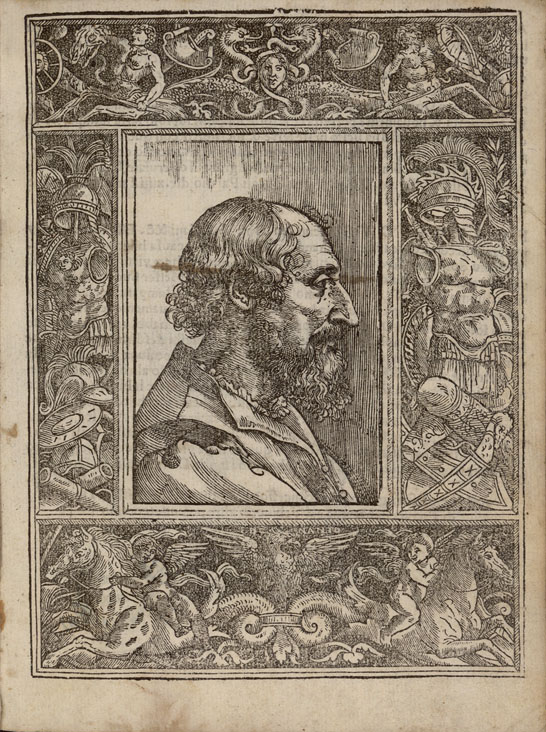 Ludovico Ariosto, woodcut in the third edition of Orlando Furioso, Ferrara 1532, by Ariosto himself.

In the third of Ariosto’s seven satires he wistfully praises the simple life of a scholar, far from the pressures of daily business – visibly a reflex to his strenuous activity in the troubled border province of Garfagnana, where he served as governor from 1522 to 1525, apparently skilfully. He processed his experiences there in a fourth satire written in 1523. The fifth deals, not without the misogyny typical for the cleric, with the choice of the suitable woman. The topic was topical for Ariosto, because he (see below) thought about getting married. The sixth, written in 1524/25, which he dedicated to his friend Pietro Bembo, deals with the subject of education and upbringing, for he was already a father of two from earlier relationships.

1525, after he had been briefly still active as an artistic director of the Ferrara court theatre, Ariost withdrew into an existence as a private man. He refused the offer (why, he explains in a seventh satire of 1524) to become a ducal ambassador in Rome, and in 1526 bought a small house in Ferrara in Via Mirasole, which he lived in together with his son Virgilio. In the following years, he wrote the comedy La Lena (“The [matchmaker] Lena”, 1528) and, above all, reworked Orlando. He purified the text in the sense of the consolidating Italian literary and written language and he changed the orientation by trying to address the anonymous reading public, which had developed in the meantime, instead of the originally intended courtly audience. The epic , , republished in 1532 in now 46 cantos, about the battles of Roland and Charlemagne’s paladin with the heathen about Roland’s love for the fluttering Angelica, as well as about the love between Ruggero and Bradamante, the alleged founders of the House of Este, was very successful and was reprinted almost two hundred times in the 16th century alone. Voltaire and Goethe still valued the work.

In 1532, Ariosto accompanied his duke, whom he had repeatedly served as an advisor, to Mantua for negotiations with Emperor Charles V. After returning home, he fell seriously ill and did not recover. Despite his success in literature, Ariosto stayed unlucky during his career. His wish, to serve for the Roman court never came true and in 1525 he became a private person only, but still working on literary works until his death on June 6, 1533, in Ferrara.