You are here: Home › history › Victoria and Albert – A Royal Wedding 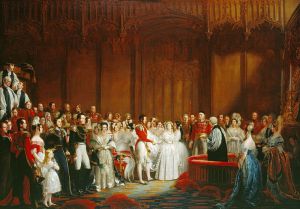 Wedding of Victoria and Albert

Victoria Alexandrina was born as the fifth in the line of succession and her childhood was rather unspectacular, as her mother kept her from contact with other children and granted her an excellent home schooled education, wherefore she was able to speak many languages. In 1836, Leopold, King of the Beligians, and uncle to Victoria suggested that his nephew Prince Albert of Saxe-Coburg and Gotha should marry his niece Victoria. After a first meeting in the same year, Victoria very much enjoyed the presence of Albert, noting that “[Albert] is extremely handsome; his hair is about the same colour as mine; his eyes are large and blue, and he has a beautiful nose and a very sweet mouth with fine teeth; but the charm of his countenance is his expression, which is most delightful.“

Victoria turned 18 on May 24, 1837 and two months later, William IV passed away wherefore she was told to become Queen Victoria. After the reign of Victoria’s father and her uncles, the British folks hoped, that a female monarch would bring back the morals and virtues of marriage and parenthood, since her predecessors had done too little to gain popularity in that sense. She reigned over the empire for almost 64 years, longer than any monarch before and her reign period, known as the famous Victorian Era was to be a time of industrial, political and military progress.

Since Queen Victoria was still unmarried at the beginning of her reign, she was to live with her mother even though their relationship was quite difficult. When suggested that the Queen could only marry to get over the distress, she visited Albert in 1839 and proposed to him on October 15. After agreeing to the marriage with the Queen, Albert deeply hoped to become her male protector, guide and advisor even though Victoria was known to be pretty dominant and independent herself.

The wedding took place on February 10, 1840 at the Chapel Royal of St. James’s Palace, London. In her diary, she later noted:

“I NEVER, NEVER spent such an evening!!! MY DEAREST DEAREST DEAR Albert … his excessive love and affection gave me feelings of heavenly love & happiness I never could have hoped to have felt before! He clasped me in his arms, & we kissed each other again & again! His beauty, his sweetness & gentleness – really how can I ever be thankful enough to have such a Husband! … to be called by names of tenderness, I have never yet heard used to me before – was bliss beyond belief! Oh! This was the happiest day of my life!“.

The ceremony itself was probably as sensational as today, which was quite unusual for royal weddings in the century. It was common for British royal weddings to be held as private ceremonies at night, which Victoria would have preferred as well, since she wanted to get married in one of the rooms at Buckingham Palace. In the end, the large wedding with about 300 guests including numerous aristocracy and officials was performed to improve her public relations. The ceremony itself was spectacular. While Prince Albert entered the chapel, he wore a uniform of a British field marshal completed with the collar of ‘The Order of the Garter‘ over his shoulder, which was the highest thinkable honor. As soon as the Queen herself entered, the British National Anthem was played while she walked through wearing a dress made of rich white satin and orange blossoms. It was traditional that royal brides would never conceal their faces and after the wedding it was also common to destroy all design plans of the dress to make sure it stayed unique.

Victoria’s beloved husband not only improved the relationship between the Queen and her mother, who had moved out of the palace, he also became an active advisor to Victoria. In the same year, she got pregnant and her first child of a total of 9 was born. Their marriage was known to be quite happy, but when Albert passed away at the age of only 42, she suffered from a long period of mourning and avoided any public life while rumors spread, the Queen had become insane.It was suggested that she should abdicate in favor of her son, but she never did so.

At yovisto, you may learn more about The Victorians, their Art and Culture through a lecture by Prof. Dr. Rickard J. Evans of Gresham College.