You are here: Home › space › Luna 2 – The First Spacecraft to Land on the Moon 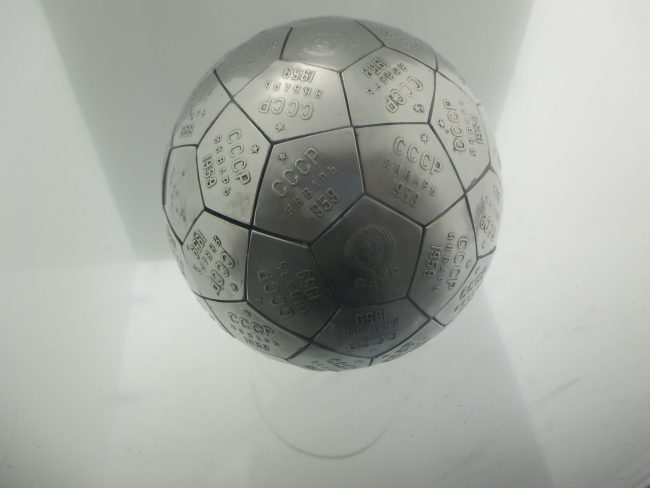 Copy of the Soviet pennant sent on the Luna 2 probe to the moon, at the Kansas Cosmosphere

On September 12, 1959, Soviet spaceprobe Luna 2 was launched. It was the first spacecraft to reach the surface of the Moon and was also the first man-made object to land on another celestial body. On September 14, 1959 it successfully impacted with the lunar surface east of Mare Imbrium near the craters Aristides, Archimedes, and Autolycus.

Actually, already Lunar 1 was intended as an impactor and was launched as part of the Luna programme in 1959. But, due to an incorrectly timed upper stage burn during its launch, it missed the Moon. However, while traveling through the outer Van Allen radiation belt,[5] the spacecraft‘s scintillator made observations indicating that a small number of high energy particles exist in the outer belt. The measurements obtained during this mission provided new data on the Earth’s radiation belt and outer space. The Moon was found to have no detectable magnetic field. The first ever direct observations and measurements of the solar wind, a strong flow of ionized plasma emanating from the Sun and streaming through interplanetary space, were performed. The spacecraft also marked the first instance of radio communication at the half-million-kilometer distance.

Luna 2, also known as Lunik 2, was similar in design to Luna 1, a spherical spacecraft with protruding antennas and instrument parts. The instrumentation was also similar, including scintillation counters, geiger counters, a magnetometer, Cherenkov detectors, and micrometeorite detectors. The spacecraft also carried Soviet pennants. Two of them, located in the spacecraft, were sphere-shaped, with the surface covered by identical pentagonal elements. In the center of this sphere was an explosive for the purpose of slowing the huge impact velocity. This was designed as a very simple way to provide the last necessary delta-v for those elements on the retro side of the sphere to not get vaporized.

Up to the Moon

The spacecraft‘s launch was originally scheduled for September 9, but after the Blok I core stage failed to reach full thrust at ignition it was shut down. After all, the flight was delayed by three days because the booster had to be removed from the pad and replaced by a different vehicle. The spacecraft took a direct path to the Moon with a journey time of around 36 hours. Luna 2 hit the Moon about 800 kilometers from the centre of the visible disk 1959 September 13 at around 9 pm.

Shortly before the hard impact between the craters Autolycus and Archimedes – on the edge of the moon bay named in her honor in 1970 in Sinus Lunicus – at a speed of 3.3 km/s (approx. 12,000 km/h), metal strips with Soviet emblems were ejected. The third rocket stage, which followed the probe, also hit above the Palus Putredinis, the Rotten Swamp, between the craters of Archimedes and Autolycus, about 30 minutes later, and it hit quite precisely at the prime meridian and about 29.1 degrees north latitude. Two objects resembling a soccer contained an explosive device, which released individual pentagonal stainless steel emblems.

Luna 2 confirmed the measurement of the probe Luna 2, which flew past the moon, according to which the moon has no significant strong magnetic field or a comparable strong radiation belt compared to Earth. Luna 2 also had a special military-political significance in the context of the Cold War arms race. The probe’s flight to the moon preceded Khrushchev‘s state visit to the USA by only a few days and once again demonstrated the Soviet Union’s ability to attack with intercontinental missiles at any time. The Soviet lunar research was continued soon after with Luna 3, which took the first pictures of the far side of the Moon.[6]