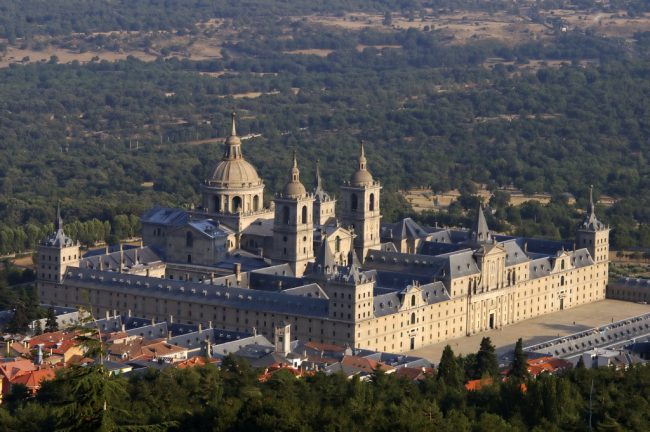 On September 13, 1584, the Royal Site of San Lorenzo de El Escorial, about 45 kilometers northwest of the Spanish capital, Madrid, is finished. El Escorial is the world largest Renaissance building.

After Philip II of Spain defeated the French King Henry II in the Battle of Saint-Quentin on August 10, 1557, the feast of St. Lawrence (Spanish: San Lorenzo), he vowed to build a monastery in honor of the saint. His astrologers chose the small Castilian town of El Escorial (“the rubble heap”). Philip II of Spain appointed the Spanish architect, Juan Bautista de Toledo, to be his collaborator in the design of El Escorial. The architect had already worked on St. Peter‘s basilica in Rome [4] and participated in several projects in Naples. He was announced architect-royal in 1559, and together they designed El Escorial as a monument to Spain‘s role as a center of the Christian world. The building’s cornerstone was laid on 23 April 1563. Unfortunately, Juan Bautista de Toledo did not live to see the completion of the project. After his death, his apprentice Juan de Herrera was appointed to finish the complex. It has since then been the burial site for most of the Spanish kings of the last five centuries.

Despite its length of 207 m and a width of 161 m, the building does not look like a typical palace. Due to Philip II’s preference for an ascetic lifestyle, the facades are designed in the sober style of the Spanish Renaissance. The basilica of San Lorenzo el Real was originally designed to take the form of a Latin cross. However, this plan was modified by Juan de Herrera to that of a Greek cross, a form with all four arms of equal length. Behind the altar is a three-tiered reredos, made of red granite and jasper, nearly twenty-eight metres tall and adorned with gilded bronze statuary by Leone Leoni, and three sets of religious paintings commissioned by Philip II. Next to the main altar of the Basilica, the residence of King Philip II is made up of a series of austerely decorated rooms with windows from which the king could observe mass from his bed. On an area of 33.000 m², which is only surpassed by the Vatican Palace, there are 2000 rooms with 3000 doors and 2673 windows, as well as 16 courtyards, 12 cloisters, 88 fountains and 86 staircases. The floor plan is in the shape of a lattice, in honor of St. Lawrence, who according to tradition suffered martyrdom on a fire grate.

Another important part of the complex is the Pantheon of the Kings, which consists of twenty-six marble sepulchers containing the remains of the kings and queens regnant. The most recent monarch interred in the pantheon is King Alfonso XIII, removed there from the Church of Santa Maria in Monserrato, Rome in 1980. In the monastery palace of the Escorial is the tomb of the Spanish monarchs since Charles V and many of their family members. Burials take place here to this day. The tomb consists of two elements: the Pantheon of Kings and the neighbouring Pantheon of Infantes. Both the Pantheon of Kings and the Pantheon of Infantes have their own pudridero. Each of them is a room not accessible to the public, in which the corpses can decay for up to 50 years before the bones are laid to rest in their final resting place in the respective pantheon.

Another highly impressive part of the complex is the library. Philip II donated his personal collection of documents to the building, and also undertook the acquisition of the finest libraries and works of Spain and foreign countries. The library’s collection consists of more than 40,000 volumes, located in a great hall fifty-four meters in length, nine meters wide and ten meters tall with marble floors and beautifully carved wood shelves. Also numerous illuminated manuscripts, such as the Ottonian Golden Gospels of Henry III can be found there. he vault of the library’s ceiling is decorated with frescoes depicting the seven liberal arts: Rhetoric, Dialectic, Music, Grammar, Arithmetic, Geometry and Astronomy. Back in the day, the library was protected from inquisitional oversight, it preserved many prohibited books that were thought to be removed. The only known copy of the Kitab al-I’tibar, a 12th-century Syrian autobiography, was discovered there in the 19th century.

Philip’s successors were reluctant to use the palace of El Escorial – but for a fixed period of the year the complex was assigned to them as their residence by court protocol. Almost all the Spanish kings from Charles I to Alfonso XIII are buried in the Baroque crypt, which was expanded in 1654 by Juan Gómez de Mora. Charles IV, who did not like the austerity of the palace, built a nearby Moorish-style pleasure palace, the Casita del Príncipe, at the end of the 18th century. Since 1861 El Escorial has not been a royal residence anymore.

In 1984, UNESCO declared The Royal Seat of San Lorenzo of El Escorial a World Heritage Site and more than 500000 tourists visit the complex every year