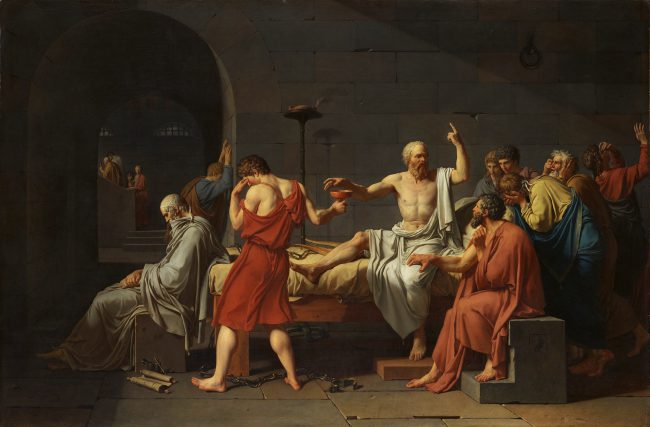 Jacques-Louis David, The Death of Socrates (1787)

Socrates was a classical Greek (Athenian) philosopher credited as one of the founders of Western philosophy. He remains an enigmatic figure in philosophy, because he did not leave us a single line of text. He is known chiefly through the accounts of later classical writers, especially the writings of his students Plato and Xenophon. Nevertheless, you might consider his importance in the fact that all Greek philosophers are categorized in philosophers before (Pre-Socratic) and after Socrates.

“False words are not only evil in themselves, but they infect the soul with evil.”
– Socrates, in Plato’s Phaedo

The Times of Socrates

During Socrates’ lifetime, Athens was the cultural center of Greece as the supreme power in the Attic League of the Sea and, as a result of the organization of the Attic democracy, the cultural center of Greece, which was exposed to profound political and social changes and manifold tensions. Therefore, in the 5th century B.C. there were good chances for new intellectual currents to develop. One such broadly conceived movement, which also effectively emerged through the teaching it offered, was that of the Sophists, with whom Socrates had so much in common that he was often regarded as a sophist by his contemporaries: the practical life of the people, questions of the polis and legal system and the position of the individual in it, the criticism of traditional myths, the examination of language and rhetoric, and also the meaning and content of education – Socrates was also concerned with all this. What set him apart from the Sophists and made him a founding figure in the history of thought were the characteristics of his philosophising that went beyond this. Characteristic, for example, was his constant, penetrating effort to get to the bottom of things.

“Wonder is the feeling of a philosopher, and philosophy begins in wonder.”
– Socrates, in Plato’s Theaetetus

Over the career of the Sokrates hardly something is for the first half of life and afterwards also only incompletely known. The biographical references are mainly taken from contemporary sources, although their statements are partly contradictory. According to Plato, Socrates was 70 years old in 399 B.C., which means that he was born in 469 B.C. The year of his trial and death, 399 B.C., is well established. According to Diogenes Laertius, he came from the Athenian demos Alopeke of the Phyle Antiochis and was the son of the stonemason or sculptor Sophroniskos. Plato states that the mother of Socrates was the midwife Phainarete. Among his teachers, according to Plato, there were also two women, namely Aspasia,[3] the wife of Pericles, and the visionary Diotima. On the male side, besides the natural philosopher Anaxagoras, with whose pupil Archelaus Socrates undertook a journey to Samos, the sophist Prodikos and the music theorist Damon, who was close to the Pythagoreans, are mentioned.

In 399 BC, Socrates went on trial and was subsequently found guilty of both corrupting the minds of the youth of Athens and of impiety (“not believing in the gods of the state”). As punishment, he was sentenced to death: the drinking of a mixture containing poison hemlock. Socrates’s death is described at the end of Plato’s Phaedo, although Plato was not himself present at the execution. Phaedo states, after drinking the poison, Socrates was instructed to walk around until his legs felt numb. After he lay down, the man who administered the poison pinched his foot and Socrates could no longer feel his legs. The numbness slowly crept up his body until it reached his heart.  According to Phaedo (61c–69e), Socrates stated that “[a]ll of philosophy is training for death“.

A Unique Style of Conversation

Socrates is known for his unique style of conversations, including his own denial of knowledge. In his conversations, Socrates became the student and made those he questioned the teacher rejecting all attempts to pass off another person’s ideas or the beliefs of the majority as truth. Socrates wanted to entirely focus on the respondents own thinking and in the Socratic method, the philosopher focused on a person’s original and critical thinking in the context of life’s important questions and the importance of the human moral development. [1]

“It would be better for me… that multitudes of men should disagree with me rather than that I, being one, should be out of harmony with myself.”
– Socrates, in Plato’s Gorgias

Explaining the Socratic Method is not easy, because there is no single and consistent definition due to the diversity with which ‘the method’ has been used in history. Even in delivered writings by Plato, there is not just one Socratic Method. According to Plato, the elenchus is the technique Socrates used to investigate ethical concepts such as justice or virtue. Elenchus is widely defined as an ‘argument of disproof or refutation, cross-examining, testing, scrutiny especially for purposes of refutation’. It is believed that four steps have been used to do so.

First, Socrates‘ interlocutor asserts a thesis which Socrates considers false and targets for refutation. He then secures his interlocutor’s agreement to further premises and argues that these further premises imply the contrary of the original thesis. In the last step, Socrates then claims that he has shown that his interlocutor’s thesis is false and that its negation is true. However, these steps are widely debated. It has especially been concerned whether this method leads to knowledge or whether it is used to refute false claims to knowledge. Other historians like W. K. C. Guthrie believe that the Socratic method actually aims to demonstrate one’s ignorance and that the recognition of a person’s ignorance may lead to knowledge.[2] It is believed, that Socrates applied his methods mainly to concepts that lacked a specific definition, including the virtues of piety, wisdom, courage, justice, and so on. In his investigations, Socrates challenged the implicit moral beliefs of the interlocutors, bringing out inadequacies and inconsistencies in their beliefs. Through investigating the inadequacies, Socrates also revealed his ignorance and it is believed that he thought his own awareness of his personal ignorance made him wiser than those who, though ignorant, still claimed knowledge. Apparently, the philosopher used his method to investigate a person’s moral believes.

Methodologically new at his time was maieutics, the method of philosophical dialogue introduced by Socrates to gain knowledge in an open-ended research process. Another original Socratic method was questioning and researching to establish philosophical ethics. Among the results achieved by Socrates was that right action follows from right insight and that justice is the basic condition for a good state of the soul. From this he concluded that doing wrong is worse than suffering wrong. A fourth element of the philosophical new beginning associated with Socrates is linked to this: the significance and proof of philosophical insights in life practice. In the trial that ended with his death sentence, Socrates certified his opponents that they were recognizably wrong. Nevertheless, he subsequently refused to escape from prison in order to avoid being in the wrong for himself. He placed a higher value on the philosophical way of life and adherence to the principle that doing wrong is worse than suffering injustice than the possibility of preserving one’s life.