You are here: Home › philosophy › Aspasia of Miletus – Greek Philosopher 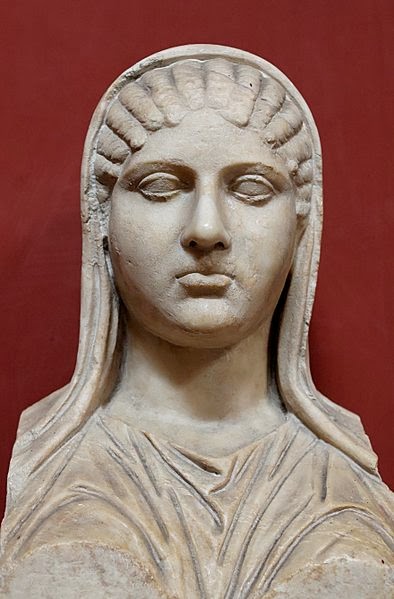 Aspasia was a female Greek philosopher of the 5th century BC. Little is known about her life, but she appears in the writings of Plato, Aristophanes, of Miletus Xenophon and other greek philosophers. It is said that Aspasia‘s teaching should have influenced Socrates, the most important of all Greek philosophers.

A Well Known Person in the Streets of Athens

Aspasia was born in the Greek city of Miletus (in today’s province Aydın, Turkey) and it is assumed that her family was quite wealthy due to the excellent education the young woman received. It is not certain, how or why Aspasia came to Athens, but many historical scientists assume that she might have ran a brothel. Still, she differed from most Athenian women due to her incredible intelligence and her independence. Since Aspasia was a foreigner, she was free of the legal restraints that traditionally confined married women to their homes and allowed to participate in the city’s public life. Aspasia became a well known person in the streets of Athens, especially for her ability to make conversations and according to Plutarch, Aspasia’s and Pericles‘ house became a center for intellectuals in Athens. It is assumed that even Socrates spent much time discussing in their home.

The Troubles for Aspasia Never Seemed to End

However, not everyone pleased her relationship with Pericles and her political influence in Athens. It is widely believed that Aspasia became mostly unpopular in the years after the Samian War, because she was claimed to have been responsible for the heavy casualities before the defeat of Samos. Later on, Aspasia was accused of corrupting the women of Athens in order to satisfy Pericles’ perversions. According to Plutarch, she was put on trial for impiety and was acquitted. However, the truth of these stories is not completely proven on this day. But the troubles for Aspasia never seemed to end. Famous comedy writer Aristophanes is supposed to have blamed her for the Peloponnesian War and she was labeled the ‘New Omphale’, ‘Deianira’, ‘Hera’ and ‘Helen’.

The Death of Pericles

In 429 BC, Pericles passed away, suffering from the Plague of Athens  and Aspasia lived in Athens with Lysikles, a follower of Pericles who worked as a sheep trader, until her death. Lysicles was killed on expedition to levy subsidies from allies in action in 428 BC. With Lysicles’ death the contemporaneous record ends. It is unknown, if she was alive when her son, Pericles, was elected general or when he was executed after the Battle of Arginusae. The time of her death that most historians give (c. 401 BC-400 BC) is based on the assessment that Aspasia died before the execution of Socrates in 399 BC, a chronology which is implied in the structure of Aeschines’ Aspasia. None of her own works have been preserved, even though an alleged speech by Aspasia is reproduced in Plato’s Dialogue Menexenos, in which Socrates refers to Aspasia as his teacher of rhetoric. On the other hand, Aspasia is depicted and belittled as a hetaera by ancient comedy writers, especially by Aristophanes. 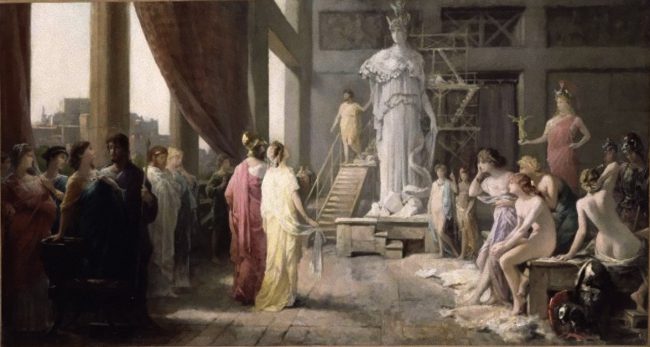 Painting by Hector Leroux (1682–1740), which portrays Pericles and Aspasia admiring the gigantic statue of Athena in Phidias’ studio