You are here: Home › astronomy › Hipparchus of Nicaea and the Precession of the Equinoxes 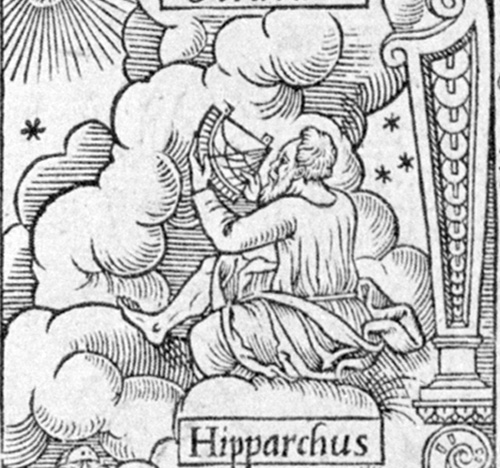 Hipparchus of Nicaea (c.190 – c.120 BC), An image of Hipparchus from the title page of William Cunningham’s Cosmographicall Glasse (1559)

Hipparchus of Nicaea was a Greek astronomer, geographer, and mathematician in the second century BC. He is considered the founder of trigonometry but is most famous for his incidental discovery of precession of the equinoxes. His other reputed achievements include the discovery and measurement of Earth‘s precession, the compilation of the first comprehensive star catalog of the western world, and possibly the invention of the astrolabe, also of the armillary sphere, which he used during the creation of much of the star catalogue.

Little is known about Hipparchus’ Life

Little is known of Hipparchus’s life, but he is known to have been born in Nicaea in Bithynia, now Iznik in north-western Turkey.[1] Most of what is known about Hipparchus comes from Strabo‘s Geography and Pliny‘s Natural History in the 1st century; Ptolemy’s 2nd-century Almagest; and additional references to him in the 4th century by Pappus of Alexandria and Theon of Alexandria in their commentaries on the Almagest. The exact dates of his life are not known, but Ptolemy attributes to him astronomical observations in the period from 147–127 bc, and some of these are stated as made in Rhodes. It is not known what Hipparchus’s economic means were nor how he supported his scientific activities. As a young man in Bithynia, Hipparchus compiled records of local weather patterns throughout the year. Such weather calendars (parapēgmata), which synchronized the onset of winds, rains, and storms with the astronomical seasons and the risings and settings of the constellations, were produced by many Greek astronomers from at least as early as the 4th century bc.[2]

A Heliocentric System before Copernicus

Hipparchus is thought to be the first to calculate a heliocentric system, but he abandoned his work because the calculations showed the orbits were not perfectly circular as believed to be mandatory by the science of the time. As an astronomer of antiquity his influence, supported by ideas from Aristotle, held sway for nearly 2000 years, until the heliocentric model of Copernicus.[4] Hipparchus also made an early contribution to trigonometry producing a table of chords, an early example of a trigonometric table. Some historians even go so far as to say that trigonometry was invented by him. The purpose of this table of chords was to give a method for solving triangles which avoided solving each triangle from first principles. He also introduced the division of a circle into 360 degrees into Greece.[1]

Hipparchus’s most important astronomical work concerned the orbits of the Sun and Moon, a determination of their sizes and distances from the Earth, and the study of eclipses.[2] Hipparchus was the first to show that the stereographic projection is conformal, and that it transforms circles on the sphere that do not pass through the center of projection to circles on the plane. This was the basis for the astrolabe. Besides geometry, Hipparchus also used arithmetic techniques developed by the Chaldeans. He was one of the first Greek mathematicians to do this, and in this way expanded the techniques available to astronomers and geographers. Hipparchus calculated the length of the year to within 6.5 minutes and discovered the precession of the equinoxes. He also compiled a star catalogue that contained about 850 stars, probably not listed in a systematic coordinate system but using various different ways to designate the position of a star. His star catalogue, probably completed in 129 BC, has been claimed to have been used by Ptolemy as the basis of his own star catalogue. [1]

The Length of the Seasons

Before Hipparchus, astronomers knew that the lengths of the seasons are not equal. Hipparchus made observations of equinox and solstice, and according to Ptolemy (Almagest III.4) determined that spring (from spring equinox to summer solstice) lasted 94½ days, and summer (from summer solstice to autumn equinox) 92½ days. This is inconsistent with a premise of the Sun moving around the Earth in a circle at uniform speed. Hipparchus’s solution was to place the Earth not at the center of the Sun’s motion, but at some distance from the center. This model described the apparent motion of the Sun fairly well. It is known today that the planets, including the Earth, move in approximate ellipses around the Sun, but this was not discovered until Johannes Kepler published his first two laws of planetary motion in 1609.[5] The value for the eccentricity attributed to Hipparchus by Ptolemy is that the offset is 1/24 of the radius of the orbit (which is a little too large), and the direction of the apogee would be at longitude 65.5° from the vernal equinox.

Eclipses and the Astrolabe

Pliny (Naturalis Historia II.X) tells us that Hipparchus demonstrated that lunar eclipses can occur five months apart, and solar eclipses seven months (instead of the usual six months); and the Sun can be hidden twice in thirty days, but as seen by different nations. The result that two solar eclipses can occur one month apart is important, because this can not be based on observations: one is visible on the northern and the other on the southern hemisphere – as Pliny indicates – and the latter was inaccessible to the Greek. Hipparchus is credited with the invention or improvement of several astronomical instruments, which were used for a long time for naked-eye observations. According to Synesius of Ptolemais (4th century) he made the first astrolabion: this may have been an armillary sphere or the predecessor of the planar instrument called astrolabe (also mentioned by Theon of Alexandria). With an astrolabe Hipparchus was the first to be able to measure the geographical latitude and time by observing fixed stars. Previously this was done at daytime by measuring the shadow cast by a gnomon, by recording the length of the longest day of the year or with the portable instrument known as a scaphe.

Hipparchus also analyzed the more complicated motion of the Moon in order to construct a theory of eclipses. In addition to varying in apparent speed, the Moon diverges north and south of the ecliptic, and the periodicities of these phenomena are different. Hipparchus adopted values for the Moon’s periodicities that were known to contemporary Babylonian astronomers, and he confirmed their accuracy by comparing recorded observations of lunar eclipses separated by intervals of several centuries. It remained, however, for Ptolemy to finish fashioning a fully predictive lunar model.[2]