You are here: Home › history › The Battle of Zama and Hannibal’s Final Defeat 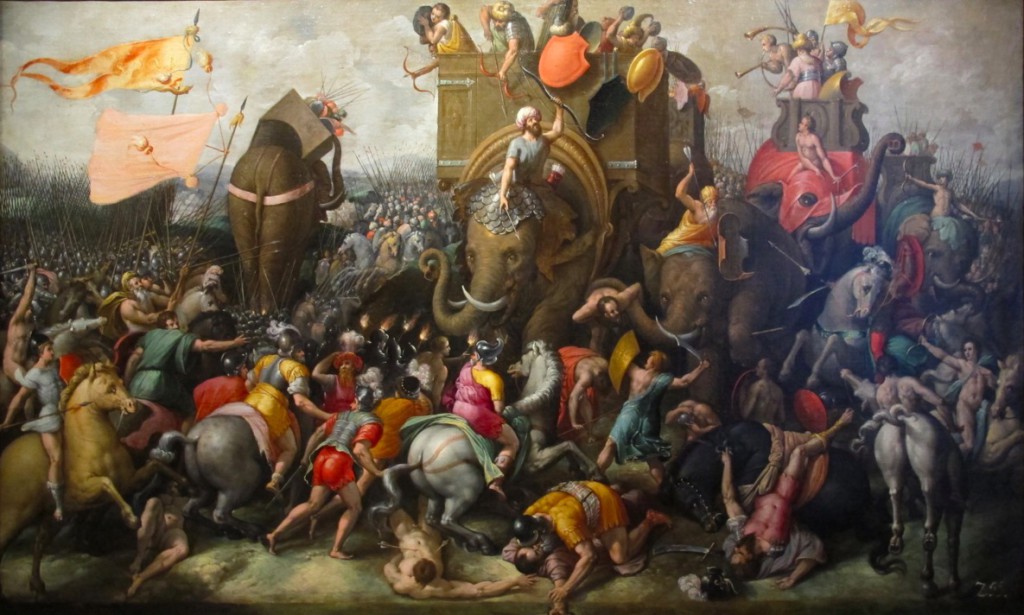 The Battle of Zama, painting 1567, after Cornelis Cort, Netherlandish

Around October 19, 202 BC, the Battle of Zama was fought between a Roman army led by Publius Cornelius Scipio Africanus (Scipio), who defeated a Carthaginian force led by the commander Hannibal. Despite Hannibal possessing numerical superiority, Scipio conceived a strategy to confuse and defeat his war elephants. The defeat on the Carthaginians‘ home ground marked an end to the 17-year 2nd Punic war.

The second Punic war between Carthage and the Roman Republic from 218 – 201 B.C. was to a considerable extent initiated by Rome, but is marked by Hannibal’s surprising overland journey and his costly crossing of the Alps, followed by his reinforcement by Gallic allies and crushing victories over Roman armies in the Battle of the Trebia and the giant ambush at Trasimene. The wars are called the “Punic Wars” because Rome’s name for Carthaginians was Poeni, derived from Poenici , a reference to the founding of Carthage by Phoenician settlers. In 216 BC, Hannibal’s army defeated the Romans again, this time in southern Italy at Cannae. It is regarded both as one of the greatest tactical feats in military history and as one of the worst defeats in Roman history. In consequence of these defeats, many Roman allies went over to Carthage, prolonging the war in Italy for over a decade.

Against Hannibal’s skill on the battlefield, the Romans deployed the Fabian strategy, where pitched battles and frontal assaults are avoided in favor of wearing down an opponent through a war of attrition and indirection. Roman forces were more capable in siege warfare than the Carthaginians and recaptured all of the major cities that had joined the enemy, as well as defeating a Carthaginian attempt to reinforce Hannibal at the Battle of the Metaurus. In the meantime, in Iberia, which served as the main source of manpower for the Carthaginian army, a second Roman expedition under Publius Cornelius Scipio Africanus Major took Carthago Nova by assault and ended Carthaginian rule over Iberia in the Battle of Ilipa. The final showdown was the Battle of Zama in Africa between Scipio Africanus and Hannibal,

Unlike most battles of the Second Punic War, the Romans had superiority in cavalry and the Carthaginians had superiority in infantry. As they met near Zama Regia in the summer of 202 BC, both armies numbered 35’000 to 40’000 men. Hannibal now had a strong elephant corps with him, but his infantry were of lesser quality to the highly trained legions of Scipio. Further Scipio had an advantage in cavalry, having delayed an engagement for long enough to allow for a strong Numidian force under their king Masinissa to join him.[1] Hannibal had refused to lead this army into battle, because he did not expect them to be able to stand their ground. There had been very bitter arguments between him and the oligarchy. His co-general, Hasdrubal Gisco, was forced to commit suicide by a violent mob after he spoke in support of Hannibal’s view that such troops should not be led into battle. Before the battle, Hannibal gave no speech to his new troops, only to his veterans.

16 years after his invasion of Italy, the army of Hannibal was destroyed and Carthage was defeated. As many as 20,000 men of his army were killed with an equal number taken as prisoners to be sold at slave auction. The Romans meanwhile, lost as few as 500 dead and 4,000 wounded. Scipio, having defeated the master of all strategists of the time, now stood as the world’s greatest general. As a reward for his success, Publius Cornelius Scipio was awarded the cognomen Africanus. Hannibal, however, managed to escape the slaughter and returned to Hadrumetum with a small escort. He advised Carthage to accept the best terms they could and that further war against Rome, at this time, was futile.[2] Notably, he broke the rules of the assembly by forcibly removing a speaker who supported continued resistance. Afterwards, he was obliged to apologize for his behavior.

According to the Roman historian Livy it was

“the most memorable of all wars that were ever waged: the war which the Carthaginians, under the conduct of Hannibal, maintained with the Roman people. For never did any states and nations more efficient in their resources engage in contest; nor had they themselves at any other period so great a degree of power and energy.“

The result weakened Carthage to such an extent that it could never again threaten Roman hegemony in the Mediterranean. The victorious commander had the remains of the Carthaginian fleet burned in 201 BC as a sign of his triumph. Hannibal became a businessman for several years and later enjoyed a leadership role in Carthage. However, the Carthaginian nobility, upset by his policy of democratization and his struggle against corruption, persuaded the Romans to force him into exile in Asia Minor, where he again led armies against the Romans and their allies on the battlefield. He eventually committed suicide (c. 182 BC) to avoid capture. Conclusively ending the Second Punic War with a decisive Roman victory, the Battle of Zama must be considered one of the most important battles in ancient history. Having staged a successful invasion of Africa and having vanquished its canniest and most-implacable foe, Rome began its vision of a Mediterranean empire.[5]