You are here: Home › medical science › Nicholas Culpeper and the Complete Herbs of England 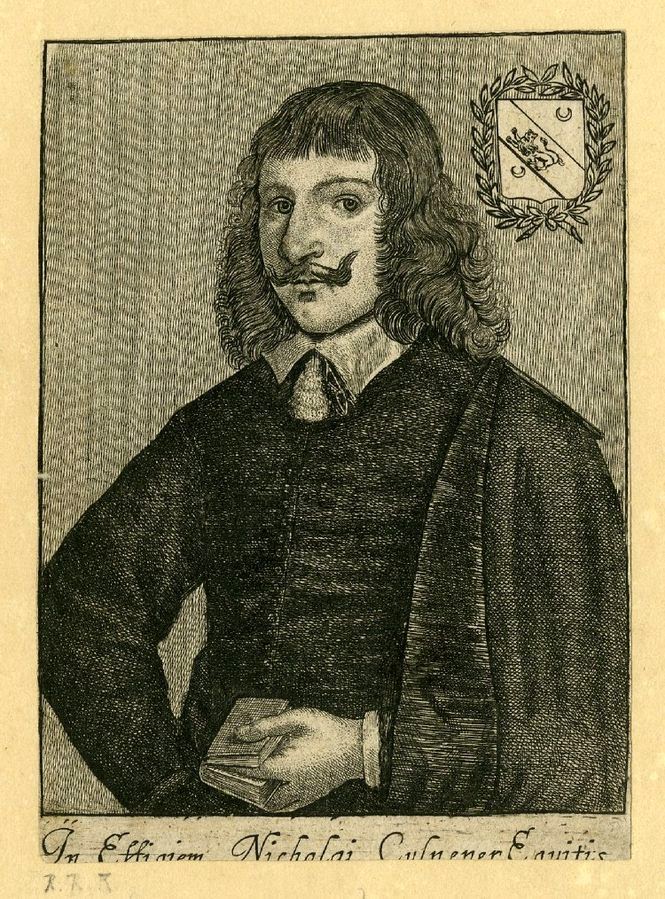 On October 18, 1616, English botanist, herbalist, physician, and astrologer Nicholas Culpeper was born. Culpeper spent the greater part of his life in the English outdoors cataloging hundreds of medicinal herbs. Thus, he is best known for his publication of Complete Herbal (1653), a comprehensive listing of English medicinal herbs and their uses, which still is in print today.

“I cannot build my faith upon Author’s words, nor believe a thing because they say it, and could wish every body were of my mind in this, – to labour to be able to give a reason for every thing they say or do.”
– Nicholas Culpeper, The Complete Herbal (1653)

Culpeper was the son of the clergyman of the same name, who came from a noble family, and of Mary Attersole, the daughter of a clergyman. He was baptized on October 24, 1616 in the church of St. Margaret in the village of Ockley between Dorking and Horsham in Surrey, where his father was rector, presumably he was born here as well. His father died shortly before or after his birth, so his mother had to leave the rectory and moved to her father William Attersole, a strict Puritan who was rector at Isfield in Surrey, who was known to be an intellectual.

He taught his grandson and it is assumed that he had high ambitions for the young Nicholas, including sending him to Cambridge, where Attersole himself had once been educated. Culpeper was educated in Latin as well as Greek and it is believed that he read numerous books he found in his grandfather’s library on astrology at early age. Further, it is assumed that there he also discovered William Turner’s Herbal, which apparently initiated his interest in medicine, plants and herbs. [1]

However, Culpeper’s grandfather was not really amused when finding out about the boy’s interests and soon restricted his readings to the Bible. He was sent to Cambridge at the age of 16 in order to study theology and to become a Church Minister in later years. Well, this was the initial plan, but the teenager soon decided differently and read the medical works of Hippocrates and Galen instead. On this day, Culpeper is quite well known as the ‘rebel’ scientist, who next to his studies apparently began drinking and smoking to compensate his frustration on his grandfather. In 1634 due to a secret relationship Culpeper’s with heiress Judith Rivers which turned into quite a scandal, the student left Cambridge. Actually the two wanted to elope, but the girl unfortunately was killed by lightning.

A Healer of the Poor

However, Reverend Attersole organized an apprenticeship for his grandson with the Master Apothecary, Daniel White and soon after abandoned his grandson. He was apprenticed for over seven years and catalogued various medicinal herbs in this period. But White went bankrupt, and Culpeper moved to Francis Drake on Threadneedle Street. Drake died in February 1639, and Culpeper and his former colleague, Samuel Leadbetter, started their own pharmacy in Spitalfields next to the Red Lion Restaurant between Islington and Stepney. Because the pharmacy was outside the city walls, he was not under the supervision of the College of Physicians. Culpeper soon gained a reputation as the healer of the poor. It is assumed that he charged only very little or nothing at all for his services as he highly sympathized with their struggles. [1,2] His mother died in the same year, one year later his grandfather. Since his grandfather was disappointed that Culpeper had not entered the clergy, he left him only 40 shillings.

It is further assumed that Culpeper had ambitions to reform the medical system, questioning traditional methods and exploring new ways of healing. A key factor in order to do so was the systematization of the use of herbals. His focus moved from tradition to reason and began combining plants and diseases. His ‘Complete Herbal’ (The complete Herbal and English Physician enlarged, being an astro-physical discourse of the common herbs of the nation; containing a complete Method or Practice of Physic, whereby a Man may preserve his Body in Health, or cure himself when sick, with such things only as grow in England, they being most fit for English Constitution, 1653) is known to have had a great influence on medicine in the western world. The success is also due to the fact that he managed to translate numerous documents discussing medicinal plants from Latin into English. [2] In fact, Culpeper wrote numerous medical works. He believed in the influence of the stars on the human body and that the world was made up of opposing elements. Diseases progressed differently depending on the state of the stars. To cure an illness, the first step was to find out which planet caused the illness. Then it was necessary to consider which part of the body was affected and whether it was flesh, bone, blood or intestines, and which planet this part of the body was under the control of. This way, the disease could be fought with a plant that was under the control of the opposite planet. Culpeper relied on his own view and intellect rather than the authority of ancient authors. By personally examining patients rather than relying solely on urine examination, Culpeper was innovative in the medicine of his time. He was particularly interested in how and why drugs were effective, and did not want to rely solely on the works of ancient authors.

In 1640 Culpeper married Alice Field (* 1625). With her dowry he was able to build a house on Red Lion Street in Spitalfields. They had seven children, of whom only the daughter Maria survived her father. On December 17, 1642, Culpeper was accused of witchcraft, but was acquitted. In 1643, the Society of Pharmacists tried to get his colleague Leadbetter to dismiss Culpeper because he did not have a license.

The Influence of Stars on the Human Body

He believed in the influence of the heavenly bodies on the human body and that the world was made up of opposing elements. Diseases proceeded differently depending on the position of the stars. To cure a disease, it was first necessary to find out which planet caused the disease. Then it was necessary to consider which part of the body was affected and whether it was flesh, bone, blood or viscera, and which planet that part of the body was under. Thus, the disease could be fought with a plant that was under the opposite planet:

In addition, diseases could be cured by sympathy, with each planet curing its own diseases:

By examining patients personally instead of relying solely on urine examination, Culpeper had an innovative effect on the medicine of his time. He was particularly interested in how and why medicines were effective, and did not want to rely solely on the works of ancient authors.

“I cannot build my faith upon Author’s words, nor believe a thing because they say it, and could wish every body were of my mind in this, – to labor to be able to give a reason for every thing they say or do.”
– Nicolas Culpeper, The Complete Herbal (1653)

In August 1643, Culpeper participated on the Republican side in the first Battle of Newbury in the English Civil War, where he was wounded in the chest by a musket shot. In the preface to the Complete Herbal, he emphasizes that his own illness led him to consider health as the highest good and to examine the nature of remedies more closely. He died of tuberculosis or of the late effects of his wound (he was also a heavy smoker) in his home in Spitalfields and was buried there in the cemetery of Bethlem Hospital.