You are here: Home › space › The First US Space Station Skylab

A Brief History of Space Stations

The first to give serious, scientifically grounded consideration to space stations were Konstantin Tsiolkovsky [7] and Hermann Oberth [8] about two decades apart in the early 20th century. In 1929 Herman Potočnik‘s The Problem of Space Travel was published, the first to envision a “rotating wheel” space station to create artificial gravity. Conceptualized during the Second World War, the “sun gun” was a theoretical orbital weapon orbiting Earth at a height of 8,200 kilometres. In 1951, Wernher von Braun published a concept for a rotating wheel space station in Collier’s Weekly, referencing Potočnik’s idea. Von Braun’s concept included room for about 80 people including astronomers, meteorologists and soldiers to guard the station. The first space station was Salyut 1, which was launched by the Soviet Union on April 19, 1971. 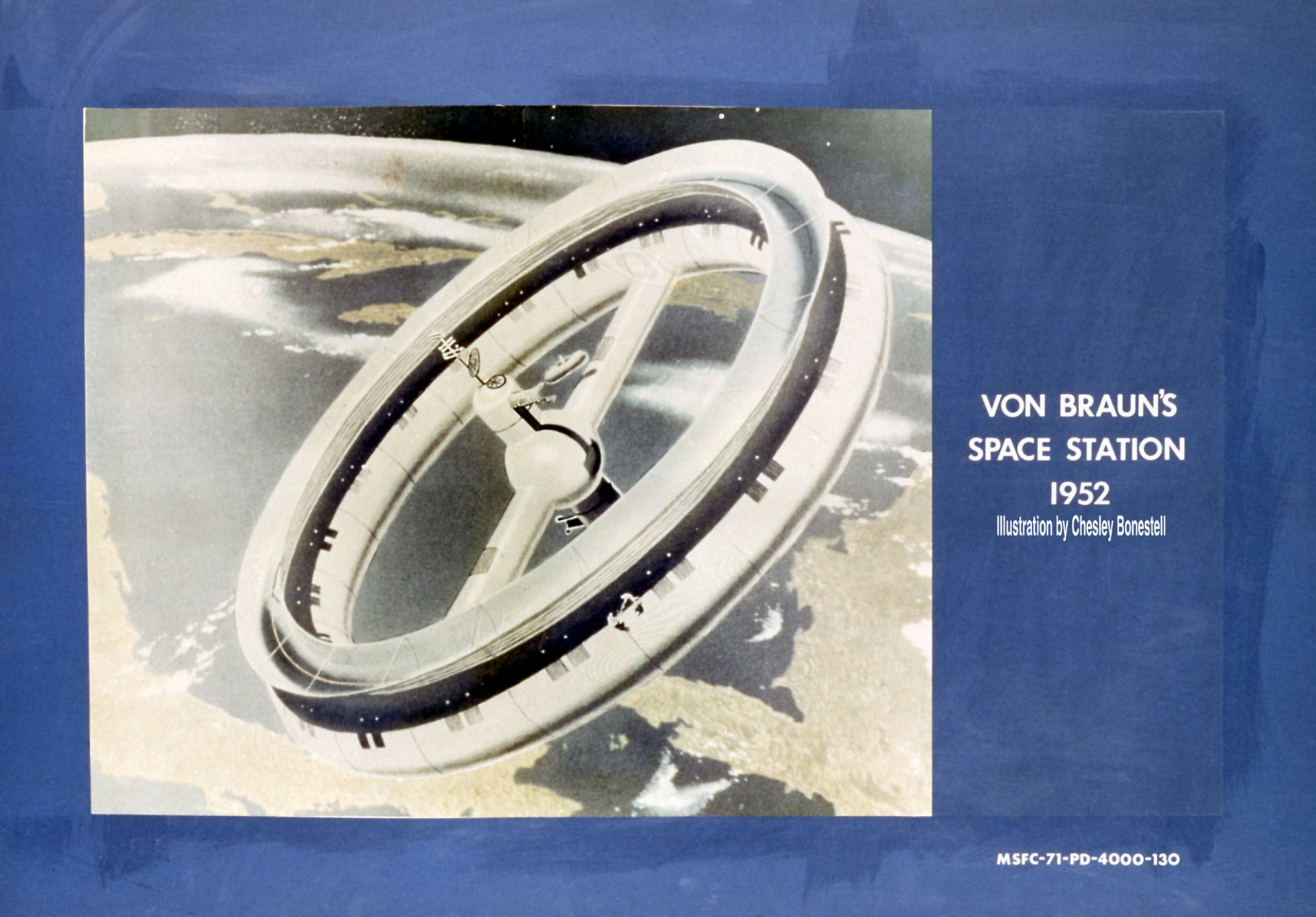 The First US Space Station

After the 1969 moon landing however, NASA was concerned about losing the numerous workers associated with the project. Therefore, von Braun, who was then head of NASA’s Marshall Space Flight Center then advocated for a smaller station in order to start the project soon. He proposed a concept that became widely known as ‘wet workshop’. The station was supposed to be built from the S-II second stage of a Saturn V. Inside the shell was a 10-foot (3.0 m) cylindrical equipment section. On reaching orbit, the S-II second stage would be vented to remove any remaining hydrogen fuel, then the equipment section would be slid into it via a large inspection hatch. Power was to be provided by solar cells lining the outside of the S-II stage. This concept was son succeeded by the ‘dry workshop’ due to financial cuts. The new plan simplified the interior for the station and also the living conditions for the astronauts were improved from previous missions. Space food was re-developed as previous astronauts found the taste and composition, in the form of cubes and squeeze tubes very unpleasant.

The Orbital Workshop was renamed “Skylab” in 1970 and three years later, on May 14, it was launched by the modified Saturn V. Unfortunately, severe damage was sustained during the launch including the loss of the station’s micrometeoroid sun shade and one of its main solar panels. The first manned mission SL-2 involved repairs to the station, which included two space walks. In total, three manned missions were made to Skylab and the last crew returned on February 8, 1974. In this period, Skylab logged about 2,000 hours of scientific and medical experiments, 127,000 frames of film of the Sun and 46,000 of the Earth.

For solar observation, which was an important Skylab goal, the space station also had an observatory, the Apollo Telescope Mount (ATM), which was extended to a position sideways to the MDA after reaching orbit. It weighed 11,066 kg, was 6 m wide and 4.4 m high. Its solar telescopes could be aligned with an accuracy of 2.5 arc seconds. It was steered from the OWS and the films had to be changed during an outboard manoeuvre (EVA). The power supply was planned with four solar modules on the ATM and two more on the main module. The solar panels of the ATM alone had a span of 31 m. 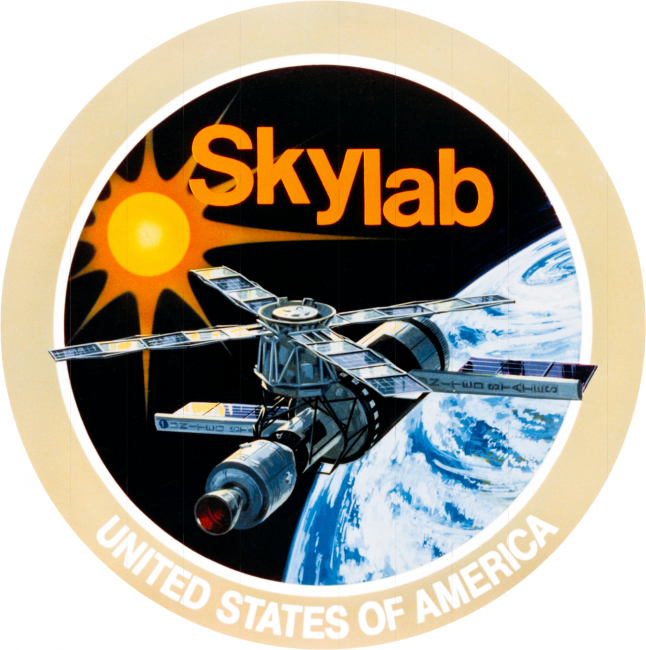 For studies on mapping saline soils, crop stands, ecosystems and mineral deposits, more than 46000 images were taken from the six earth sensors (1× photography in the visible range, 1× photography in the infrared range, 2× electronic image recorders in the infrared range, 2× radars for observation in the microwave range). The latter two radar devices – the first ever used in space – led to groundbreaking results on the wind speed over the ocean, swell and wave height, the localisation of icebergs and ice floes as well as the mapping of geological formations on land.

Extensive knowledge about the effects of long-term stay in weightlessness could be gained. It turned out that the consumption of resources was much lower than assumed. The crew lived on the supplies and food, water and gases launched with Skylab 1. Originally, the second and third crew were each supposed to stay in the space station for 56 days. The lower consumption, however, made a stay of 59 and 84 days possible, whereby the last crew supplemented the supplies somewhat and in particular brought back additional films. In addition some animal experiments with fish and spiders were carried out. 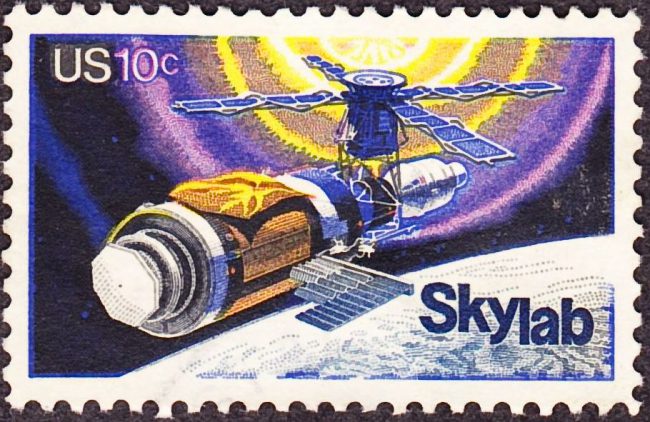 In weightlessness, experiments with melting, welding and brazing processes were carried out, which proved the possibility of building technical structures by astronauts in space. Furthermore, the miscibility of elements of different densities, which are immiscible on earth, was proven in weightlessness and crystal growth experiments, which failed on earth due to the acceleration due to gravity, could be carried out successfully.

The End of the Mission

When the missions were completed, the future of Skylab was highly debated. Several scientists proposed plans for reusing the station again in 1978 but the plans turned out quite risky, since the attitude control system needed refueling and that the station’s gyroscopes had failed. The re-entry of Skylab faced great media attention. The station’s debris landed southeast of Perth, Australia. In fact the station broke into several parts later than calculated, so that the crash area was further east than planned. Affected was the area southeast of Perth in Western Australia near Balladonia, where debris fell in the dark morning hours without hurting anyone. Various parts were recovered, brought to the USA and identified there after NASA had offered a reward for the first find. The authorities of the Australian community of Esperance Shire sent NASA a fine of $400 for illegal waste disposal. NASA refused to pay; the outstanding amount was not paid by a US radio station until 2009.

At yovisto academic search engine, you may be interested in an entertaining video on the 40th anniversary of Skylab by NASA.