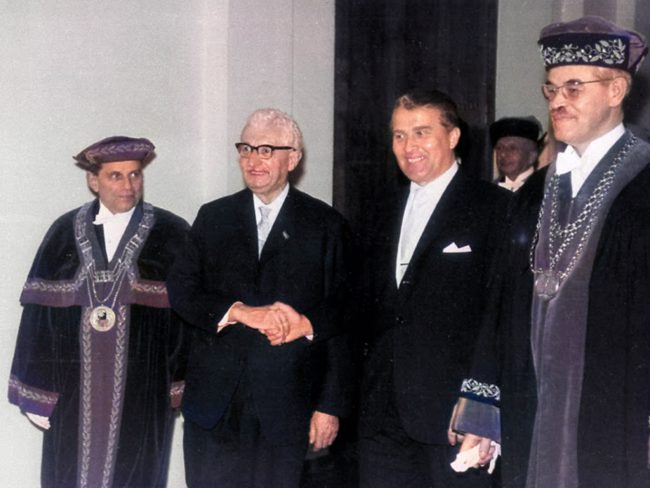 On June 25, 1894, Austro-Hungarian-born German physicist and engineer Hermann Oberth was born. He was the first, who when thinking about the possibility of spaceships grabbed a slide-rule and presented mathematically analyzed concepts and designs.

Maybe you have already heard of the ‘Oberth Effect‘. In interplanetary spaceflight, the Oberth effect is used in a powered flyby where the application of an impulse, typically from a rocket engine, close to a gravitational body can result in a higher change in kinetic energy and final speed. The effect is named after Hermann Oberth, who one of the founding fathers of rocketry and astronautics. Hermann Oberth came from a family of Transylvanian Saxons. An avid reader of Jules Verne‘s futuristic novels, which his father had given him as a gift, Oberth began to deal with rocket and space theory problems during his high school years.[3] He was able to prove through physical-mathematical considerations that a “journey to the moon” with a cannon like that used by Jules Verne, through which the moon travellers would be shot to the moon, could not be possible, since the travellers would not survive the enormous contact pressure on launch. He came to realize that a journey to the moon could only be achieved with extremely powerful rockets. In 1912, at the request of his father, who was a surgeon, he began to study medicine in Munich and also attended lectures at the Technical University.

In 1914, he joined the first World War and after he had received a wound on the Eastern front, he was deployed as medical sergeant in the hospital in Schäßburg. In 1918, he continued his studies at the University of Budapest. During the war, he designed his first rocket powered with ethanol and oxygen. After a serious illness, Oberth found that medicine did not correspond to his real interests. Therefore, in 1919 he began studying physics at the Technical University of Cluj-Napoca, Romania, which he continued in Munich, Göttingen and Heidelberg. In 1922, his Heidelberg dissertation The Rocket to Planet Spaces (Die Rakete zu den Planetenräumen), in which he dealt with space travel, was rejected because there was no proven expert on the subject. He submitted his manuscript for his diploma thesis in Cluj Napoca and passed the state examination in 1923. In the same year, the Munich scientific publisher Oldenbourg published the manuscript. Oberth himself had to pay for the printing costs, but his first work was a success.. However, his work was published anyway in 1923 and faced a great success. In his work, Oberth published a description of all elements needed to create fuel for multistage rockets.

In 1927, the German amateur rocket association “Verein für Raumschiffahrt” was established. Hermann Oberth became a member and managed to network with numerous engineers interested in rocket technologies.[4] The works of Oberth and his colleagues including Wernher von Braun, Ernst Stuhlinger, Helmut Gröttrup, and Walter Thiel in this period formed the foundations of rocket engineering and are considered the very early milestones in space flight. In Fritz Lang‘s visionary film Frau im Mond (1929) he worked as a scientific advisor together with Rudolf Nebel. However, the launch of a rocket to the premiere failed. 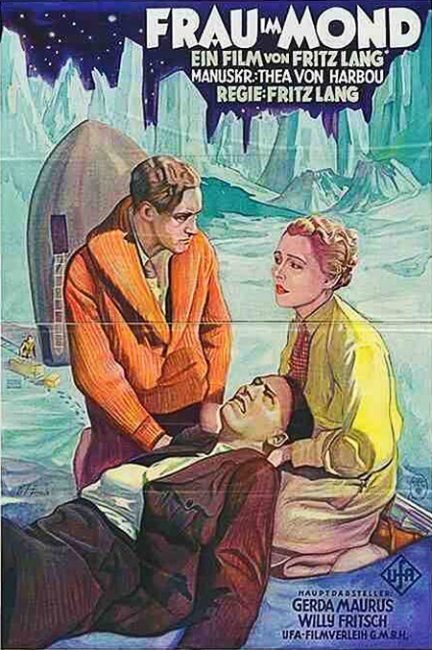 Oberth received the German citizenship in 1939 and worked under the name Fritz Hann at the Army Research Center in Pennemünde, Germany. There, he was also involved in the V2-Program.[5] When the war was over, Oberth worked on several rocket-engineering projects in Switzerland, the USA and Germany. In this period, Oberth was involved in writing the study, “The Development of Space Technology in the Next Ten Years” and published his ideas on a lunar exploration vehicle, a “lunar catapult”, and on “muffled” helicopters and airplanes. In 1948 Hermann Oberth went to Switzerland and worked there as a scientific expert. From 1950 to 1953 he was in the service of the Italian navy and developed a solid rocket. In 1955, at the instigation of his former student Wernher von Braun, he worked in the USA at the Rocket Development Center in Huntsville, Alabama. In 1958 he returned to Germany to travel to the USA again in 1961, where he worked as a consulting engineer for Convair in San Diego, California. He then retired. Oberth also dealt with the possibility of extraterrestrial life and the UFO phenomenon and commented about it several times.

The Rocket to the Planet Spaces

His most famous works were The Rocket to the Planets (Die Rakete zu den Planetewnräumen,1923) and Routes to Space (Wege zur Raumschifffahrt, 1929). In it he also introduced the ion engine he had invented. In The Rocket to Planet Spaces he put forward the following theses:

With the launch of Sputnik 1 (1957)[7] and Yuri Gagarin‘s (1961) [8] flight into space, these completely utopian ideas were turned into reality less than four decades later.