You are here: Home › physics › Sir Joseph Rotblat and the Nuclear Test Ban 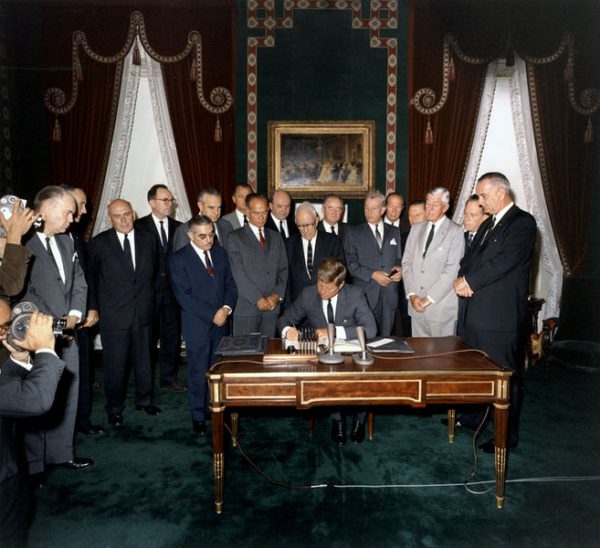 On November 4, 1908, Polish physicist and recipient of the Nobel Peace Prize Joseph Rotblat was born. Rotblat was the only physicist to leave the Manhattan Project (1942–46) on the grounds of conscience. Rotblat’s work on nuclear fallout was a major contribution toward the ratification of the 1963 Partial Nuclear Test Ban Treaty. A signatory of the Russell–Einstein Manifesto (1955), he was secretary-general of the Pugwash Conferences on Science and World Affairs from their founding until 1973.

The son of a Jewish-born family impoverished during World War I, Joseph Rotblat worked as an electrician in Warsaw by day at the age of 15; he studied physics in the evenings. Because his parents could not afford to send him to a gymnasium, Rotblat received his secondary education in a cheder taught by a local rabbi. Even though he had no formal education, Rotblat began working at a physics department of the Free University of Poland, gaining an MA in 1932 and Doctor of Physics, University of Warsaw in 1938. From 1933 he worked as a research associate in the radiological laboratory of the Warsaw Scientific Society, headed by his patron Ludwik Wertenstein, and in 1937 became director of the Polish Institute of Atomic Science at the Free University of Poland. In 1938 he received a doctorate in physics from the University of Warsaw with a thesis on the Determination of a number of neutrons emitted from a source. In 1939 he received a fellowship abroad and went to Great Britain in August, shortly before the outbreak of World War II.

Before the start of the Second World War, Rotblat already conducted experiments showing that neutrons were emitted in the fission process. In early 1939 he envisaged that a large number of fissions could occur and if this happened within a sufficiently short time, then considerable amounts of energy could be released. He went on to calculate that this process could occur in less than a microsecond, and as a consequence would result in an explosion. Rotblat was then invited to study in Paris at the University of Liverpool under James Chadwick.

It was clear to Joseph Rotblat that his work could be used to produce a bomb and with the rise of Nazi Germany he continued because he thought the only way to prevent Nazi Germany from using a nuclear bomb was if Britain had one to act as a deterrent. After the start of the war, he started working explicitly with Chadwick on bomb work in Liverpool. In 1944, Rotblat went with James Chadwick’s group to work on the Manhattan Project to build the first atomic bombs.[2] However, as it became more and more apparent that Germany had abandoned the development of its own bomb that Rotblat asked to leave the project.

On the Grounds of Conscience

James Chadwick was then shown a security dossier in which Rotblat was accused of being a Soviet spy and that, having learnt to fly at Los Alamos, he was suspected of wanting to join the Royal Air Force so that he could fly to Poland and defect to the Soviet Union. In addition, he was accused of visiting someone in Santa Fe and leaving them a blank cheque to finance the formation of a communist cell. Rotblat was able to show that much of the information within the dossier had been fabricated. In reminiscences from 1985 Rotblat tells how a box containing “all my documents” went missing on a train ride from Washington D.C. to New York as he was leaving the country, but the presence of large numbers of Rotblat’s personal papers from Los Alamos now archived at the Churchill Archives Centre “is totally at odds with Rotblat’s account of events”. Joseph Rotblat was not permitted to re-enter the United States until 1964 and he was the only physicist to leave the Manhattan Project on the grounds of conscience, even though others later refused to work on atomic bombs after the defeat of Japan.

Joseph Rotblat became senior lecturer and acting director of research in nuclear physics at the University of Liverpool and naturalized as a British subject. He also became more interested in the medical and biological uses of radiation and was appointed Professor of Physics at St Bartholomew’s Hospital, London. In 1955, he demonstrated that the contamination caused by the fallout after the Castle Bravo test at Bikini Atoll nuclear test by the United States would have been far greater than that stated officially. He managed to show that the bomb had three stages and showed that the fission phase at the end of the explosion increased the amount of radioactivity a thousandfold. Rotblat’s paper on the matter was taken up by the media and contributed to the public debate that resulted in the ending of atmospheric tests by the Partial Nuclear Test Ban Treaty.

Rotblat believed that scientists should always be concerned with the ethical consequences of their work and he became one of the most prominent critics of the nuclear arms race. He was the youngest signatory of the Russell-Einstein Manifesto in 1955, and chaired the press conference that launched it. Along with Bertrand Russell and others, Rotblat organized the first of the Pugwash Conferences on Science and World Affairs in 1957 and continued to work within their framework until his death. Further, Joseph Rotblat joined with Einstein, Oppenheimer, Russell and other concerned scientists to found the World Academy of Art and Science. After the breakthrough of the Partial Nuclear Test Ban Treaty, Rotblat was in 1965 made a CBE. Despite the Iron Curtain and the Cold War, he advocated cooperation between scientists from West and East. Borrowing from the Hippocratic Oath, he believed that scientists should have their own moral code.

Józef Rotblat died on August 31, 2005, at the age of 96. Until his death, he was thus the oldest living Nobel laureate since the death of physics laureate Hans Bethe on March 6, 2005.