You are here: Home › chemistry › Daniel Rutherford and the isolation of Nitrogen 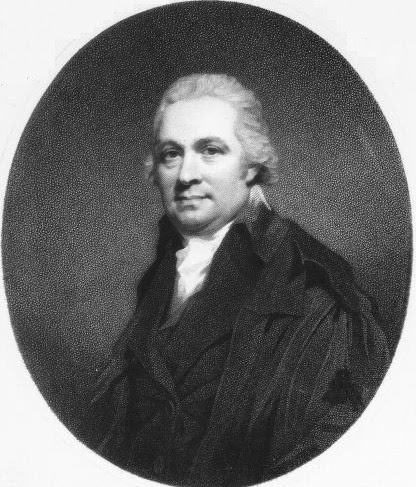 On November 3, 1749, Scottish physician, chemist and botanist Daniel Rutherford was born. Rutherford was the uncle of famous novelist Sir Walter Scott. But originally, he is most famous for the isolation of nitrogen in 1772.

The second son of Professor John Rutherford and his second wife Anne Mackay, Daniel Rutherford was born in Edinburgh on 3 November 1749. Educated at first at home, he was sent, when seven years old, to the school of a Mr. Mundell, afterwards to an academy in England, and thence to the University of Edinburgh, where, after graduating M.A., he entered on his medical studies. There, he obtained his diploma as M.D. 12 Sept. 1772, his inaugural dissertation being ‘De aere fixo dicto aut Mephitico.’ [1] The dissertation opens with an account of the work of Joseph Black [4] and of Henry Cavendish on ‘fixed’ or ‘mephitic air’ (i.e. carbonic acid).[3] Rutherford proceeds to point out that ‘by means of animal respiration’ pure air not only in part becomes mephitic, but also undergoes another singular change in its nature.

The mephitic air he supposed to have been probably generated from the food, and to have been expelled as a harmful substance from the blood, by means of the lungs. He found experimentally that air passed over ignited charcoal and treated with caustic lye behaves in the same way as air made noxious by respiration. He continued that when a metal, phosphorus, or sulphuris calcined in air (probably in the case of the sulphurin the presence of water), the residual gas contains no ‘mephitic air,’ but only undergoes the ‘singular change’ above referred to. The remaining air did not support combustion, and a mouse could not live in it. Rutherford gave no name to the residual gas, but referred to it only as “noxious air” or “phlogisticated air”.

The Discovery of Nitrogen

Being convinced of the contemporary phlogiston theory that postulated a fire-like element called phlogiston, contained within combustible bodies and released during combustion – Rutherford explained his results in terms of it. The residue of air left after burning, in fact a mixture of nitrogen and carbon dioxide, was therefore referred to as phlogisticated air, having taken up all of the phlogiston. Phlogiston remained the dominant theory until the 1780s when Antoine-Laurent Lavoisier showed that combustion requires a gas that has mass (oxygen) and could be measured by means of weighing closed vessels.[5] Nowadays, the gas is called nitrogen, introduced from the French nitrogène, coined in 1790by French chemist Jean-Antoine Chaptal. The name comes from its Greek roots, nitron (meaning “saltpeter”, modern potassium nitrate) and genes (meaning “forming”) and Rutherford was given credit for discovering it, though his conclusions were somewhat incorrect. Nitrogenis one of the most abundant elements in the atmosphere(~78%) and is found in all proteins and nucleic acids. Nitrogenis an inert (relatively non-reactive) gas that has the atomic number of seven and forms many inorganic compounds that are used as fertilizers and noxious gases.

After publication and having completed his university course, Rutherford travelled in England, went to Francein 1773, and thence to Italy. He returned in 1775 to Edinburgh, where he began to practise. He became a licentiate of the Royal College of Physicians of Edinburgh in 1776 and a fellow the year after. He was president of the college from December 1796 to Dec. 1798. In 1786, he succeeded Dr. John Hope as professor of botany in the university and keeper of the Royal Botanic Garden at Edinburgh. When ten years old Rutherford suffered from gout, which increased in severity in later life, and was probably the cause of his sudden death, on 15 November 1819.