You are here: Home › chemistry › Sir Frederick Abel and the Smokeless Gunpowder 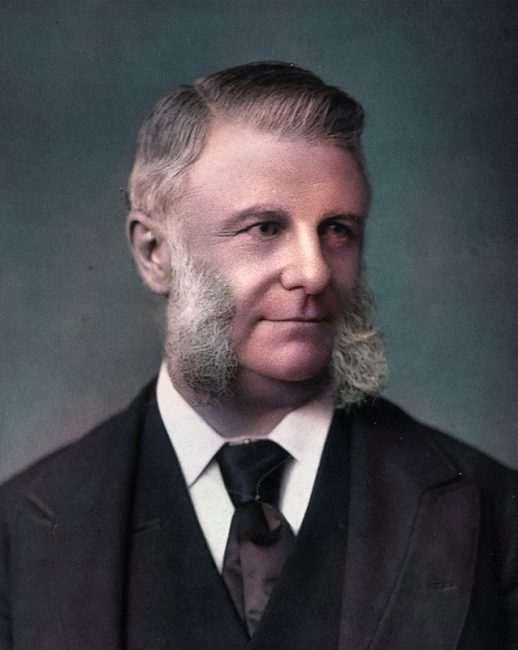 On July 17, 1827, English chemist Sir Frederick Abel was born. Abel was a military explosives specialist, and with the chemist Sir James Dewar, invented cordite in 1889, which is a smokeless gunpowder that was later adopted as the standard explosive of the British army, and proved vital in WWI.

Frederick Abel was the son of the German-English musician Johann Leopold Abel and great-grandson of Leopold August Abel. His scientific interest grew through his uncle A. J. Abel, a mineralogist and pupil of Jakob Berzelius.[3] Frederick Abel studied chemistry at the Royal Polytechnic Institution. In 1845 he started studying at the Royal College of Chemistry and he was later appointed lecturer in chemistry at the Royal Military Academy, Woolwich, succeeding Michael Faraday,[4] who had held that post since 1829. Frederick Abel served as ordnance chemist at the Chemical Establishment of the Royal Arsenal at Woolwich and became a leading authority on explosives in Great Britain. Abel also became chemist at the War Department and chemical referee to the government.

To Frederick Abel’s most important work belonged the manufacture of guncotton. He developed a process that reduced the nitrated cotton to fine pulp. This enabled it to be safely manufactured and at the same time yielded the product in a form that increased its usefulness. Ascanio Sobrero [5] first synthesized nitroglycerine in 1847 and it was subsequently developed and manufactured by Alfred Nobel as an industrial explosive. However, it was not suitable as a propellant, because despite its energetic and smokeless qualities, it detonates instead of deflagrating smoothly, making it more liable to shatter a gun, rather than propel a projectile out of it. Christian Schönbein was able to significantly contribute to the discovery of guncotton, a nitrocellulose-based material.[8] He promoted its use as a blasting explosive and sold manufacturing rights to the Austrian Empire.

The Challenges of Guncotton

Even though guncotton was more powerful than gunpowder, it was also more unstable. It was then John Taylor who obtained an English patent for guncotton. However, one of the factories producing guncotton exploded in 1862 and then Thomas Prentice & Company started to manufacture guncotton in Stowmarket. Frederick Abel began his research at Waltham Abbey Royal Gunpowder Mills leading to a manufacturing process that eliminated the impurities in nitrocellulose making it safer to produce and a stable product safer to handle. Abel patented this process in 1865 when the second Austrian guncotton factory exploded. After the Stowmarket factory exploded in 1871, Waltham Abbey began production of guncotton for torpedo and mine warheads. Smokeless Powders came into general use towards the end of the 19th century. The British government adopted cordite and it was invented jointly by Frederick Abel and Sir James Dewar.[6] Abel further researched the behaviour of black powder when ignited, along with the Scottish physicist Sir Andrew Noble.[7]

Abel developed Abel’s equation of interior ballistics, named after him: It indicates the maximum pressure p of explosives of mass m burnt in a volume V in an explosion at a temperature Tex.  Sizes such as covolume, combustion temperature and specific pressure were previously tabulated as powder constants. The Abelian equation as pyrostatic equation of state is valid up to pressures of about 3000 bar and was published in Abel’s Researches in Explosives 1874. For nitroglycerin, for example, the powder constants are 10800 atmospheres for the specific pressure and 0.71 liters per kilogram for the covolume[5], for black powder a value of 0.49 for the covolume and 3250 atmospheres for the specific pressure. Depending on the charge density, the maximum pressure at which the expansion of the gases in the gun barrel begins can thus be calculated.

He was elected a Fellow of the Royal Society in 1860 and received their Royal Medal in 1887. He was president of the Chemical Society (1875–7), of the Institution of Electrical Engineers (then the Society of Telegraph Engineers) (1877), of the Institute of Chemistry (1881–2) and of the Society of Chemical Industry (1883).  He was made a Commander of the Bath (CB) in 1877. and knighted on 20 April 1883. He took an important part in the work of the Inventions Exhibition (London) in 1885, and in 1887 became organizing secretary and first director of the Imperial Institute, a position he held till his death. Abel died at his residence in Whitehall Court, London, on 6 September 1902, aged 75