You are here: Home › physics › James Dewar and the Liquefaction of Gases 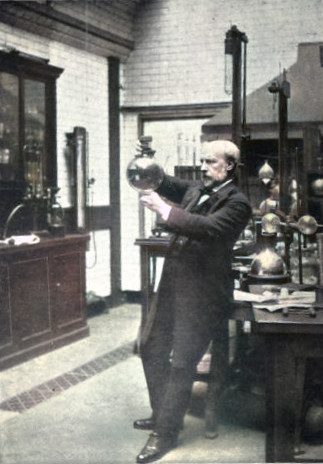 On September 1842, Scottish chemist and physicist Sir James Dewar was born. He is probably best-known today for his invention of the Dewar flask, which he used in conjunction with extensive research into the liquefaction of gases.

James Dewar was born in Kincardine, Fife, Scotland, in 1842, the youngest of six boys. He lost his parents at the age of 15. He was educated at Dollar Academy and the University of Edinburgh, where he studied under Lord Playfair, a famous Scottish scientist and Liberal politician, whose assistant he later became. Dewar would also study under August Kekulé at Ghent.[3] In 1875, Dewar was elected Jacksonian professor of natural experimental philosophy at the University of Cambridge and became a member of the Royal Institution. In 1877, he replaced Dr. John Hall Gladstone in the role of Fullerian Professor of Chemistry in 1877. Dewar was also the President of the Chemical Society in 1897 and the British Association for the Advancement of Science in 1902, as well as serving on the Royal Commission established to examine London’s water supply from 1893 to 1894 and the Committee on Explosives. It was whilst he was serving on the Committee on Explosives that he and Frederick Augustus Abel developed cordite, a smokeless gunpowder alternative.

Dewar’s scientific work covers a wide field and his earlier papers cover a wide range of topics; organic chemistry, Hydrogen and its physical constants, high temperature research, the temperature of the sun and of the electric spark, electro-photometry and the chemistry of the electric arc. In 1867 he described several chemical formulas for benzene. Ironically, one of the formulae, which does not represent benzene correctly and was not advocated by Dewar, is sometimes still called Dewar benzene. Dewar investigated the physiological action of light, and examined the changes which take place in the electrical condition of the retina under its influence. In 1878 a long series of spectroscopic observations, the later of which were devoted to the spectroscopic examination of various gaseous elements separated from atmospheric air by the aid of low temperatures.

Dewar Flask and the Liquefaction of Gases

Dewar is most widely known in connection with his work on the liquefaction of the so-called permanent gases and his researches at temperatures approaching absolute zero. In 1877, Louis Cailletet and Raoul Pictet independently were able to create small amounts of oxygen and nitrogen in liquid form at temperatures less than 80° above absolute zero, a feat even Michael Faraday, who had liquified most of the known gases by 1845, had been unable to carry out.[1,4]

In 1878 he devoted a Friday evening lecture at the Royal Institution to the then recent work of Cailletet and Pictet, and exhibited for the first time in Great Britain the working of the Cailletet apparatus. Six years later, again at the Royal Institution, he described the researches of Zygmunt Florenty Wróblewski and Karol Olszewski, and illustrated for the first time in public the liquefaction of oxygen and air. Soon afterwards he built a machine from which the liquefied gas could be drawn off through a valve for use as a cooling agent, before using the liquid oxygen in research work related to meteorites; about the same time he also obtained oxygen in the solid state.

The greatest stumbling block he encountered in his work with liquification was keeping the gases cold long enough to study them. Liquid oxygen kept in a flask absorbed heat from the surrounding air and returned to its gaseous phase. To eliminate the effect of the warm air, Dewar put the flask of liquid gas inside a larger flask and created a vacuum between them. A vacuum would prevent the transfer of energy that occurred through conduction or convection; heat would not penetrate and cold would not escape. To eliminate the transfer of radiant energy, Dewar silvered the walls of the flasks so they would reflect, rather than absorb, energy. He also invented a technique to create a more efficient vacuum.[1] Dewar found that charcoal eats gas at low temperatures. So he placed a bit of charcoal in the gap; then evacuated it as best he could. When cold liquid gas filled the tank, the charcoal removed the remaining air from the wall space, and made the insulation nearly perfect.[2]

In 1893, Dewar invented the double-walled evacuated transport and storage vessel for liquid gases made of mirrored glass, which he named the Dewar vessel after him. Insulating cans and containers for storing dry ice and liquid gases are still constructed according to this principle today. A precursor of such a vessel, but without mirroring the inside of the glass, was described by Adolf Ferdinand Weinhold as early as 1881 in his book Physikalische Demonstrationen für die Darstellung fester Quecksilbers durch Abkühlen (Physical demonstrations for the presentation of solid mercury by cooling.). Dewar was considered the inventor of the Dewar vessel that made him famous, but did not apply for a patent for it and lost a patent case against the Thermos company that marketed it.

Together with Frederick Augustus Abel,[6] he invented smokeless powder, which had military applications, and the explosive cordite. With Henri Moissan, Dewar succeeded in liquefying fluorine in 1897 and hydrogen in 1898. In 1899 he allowed hydrogen to solidify, generating a temperature of 14 Kelvin, the lowest temperature to date at which all substances, with the exception of helium, are in the solid state. James Dewar died in London in 1923, still holding the office of Fullerian Professor of Chemistry at the Royal Institution, having refused to retire.