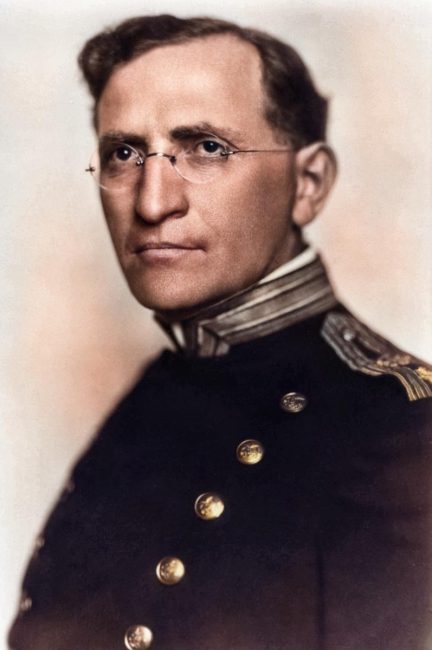 On July 16, 1874, American physician and epidemiologist Joseph Goldberger was born. Goldberger was an advocate for scientific and social recognition of the links between poverty and disease. Due to his important work on the link between pellagra and poor diet, he was nominated five times for the Nobel Prize.

Joseph Goldberger was born in Girált, Sáros County, Kingdom of Hungary in a Jewish family, as the youngest of six children of Samuel and Sarah Gutman Goldberger. He emigrated to the U.S. with his parents in 1883, eventually settling in Manhattan’s Lower East Side, where he attended the city’s public schools and entered the College of the City of New York in 1890 as an engineering student. After a chance encounter in 1892, however, Goldberger became interested in medicine and transferred to the Bellevue Hospital Medical College, receiving his M.D. degree in 1895. After placing first on the highly competitive Bellevue internship examination, he spent eighteen months at the hospital as intern and house physician.[1]

Setting up a private medical practice in Wilkes-Barre, Pennsylvania, Goldberger soon became intellectually restless. He joined the Public Health Service in 1899, serving first post at the Port of New York, where he conducted health inspections of newly arrived immigrants, a work that made him a standout investigator for detecting infectious diseases. He became a well-known epidemiologist.

From 1902–1906, Goldberger held a number of epidemiology posts — in Mexico, Puerto Rico, Mississippi and Louisiana. He was involved the Public Health Service’s efforts to combat yellow fever, typhus, dengue fever, and typhoid fever. He gave a particularly noted lecture in Boston, Massachusetts on the effects of parasites in disease transmission. In 1909, Goldberger published his research on Schamberg disease, an acarine mite-based parasitic infection common among poor, inner-city populations. Perhaps most significant was his demonstration, with J. F. Anderson, that measles is transmissible to monkeys by a filter-passing virus and that the virus is present in buccal and nasal secretions. In his typhus studies, also in collaboration with Anderson, Goldberger was able to show that head as well as body lice could act as vectors and that “Brill’s disease,” described in New York City, was actually typhus. In another, less significant but impressively elegant, field investigation, he demonstrated the role of a straw mite in causing a dermatological ailment.[1]

In 1914, Goldberger was asked by US Surgeon General Rupert Blue to investigate pellagra, then an endemic disease in the Southern US. Previously it had been rather rare in the United States, but an epidemic broke it out in 1906, primarily in the South, and continued until the 1940s. By 1912, South Carolina alone had 30,000 cases, and with a death rate of 40% pellagra had devastating effects on the region. Pellagra was first identified among Spanish peasants by Don Gaspar Casal in 1735. A loathsome skin disease, it was called “mal de la rosa” and often mistaken for leprosy. Pellagra has sometimes been called the disease of the four D’s – dermatitis, diarrhoea, dementia, and death.[3] Some physicians at the time believed the disease arose in consequence to either bad genes, airborne germ, or miasma arising from poor sanitary conditions. Goldberger’s theory that pellagra was associated with diet contradicted the most widely accepted medical opinion that pellagra was an infectious disease. As the germ theory of disease had recently become popular in not only the medical field, it was often generalized to far more ailments than it actually caused. Goldberger on the other hand suspected that diet was the true cause, which he came to believe through his observations of pellagra and the fact that hospital staff who worked closely with pellagra patients did not fall sick themselves. Furthermore, pellagra cases were overwhelmingly poor Southerners, especially African Americans and sharecroppers. This was a group that often ate filling and starchy but nutrient-poor foods, especially those derived from corn.

A Question of Diet?

His investigation into pellagra led him to conduct two coinciding experiments starting in 1914. One study focused on two orphanages experiencing rampant pellagra. 172 orphans in the study had the disease already, while 168 subjects did not. With federal funding, he switched them to a more varied diet that included fresh meat, vegetables, milk, and eggs. After several weeks, there were no new cases and almost all of the afflicted orphans had recovered. In the two years of the study, there was only one new case. Another experiment took place at the Georgia State Sanitarium, the largest mental asylum in the South, including both a research and control group. Also, he studied two categories of human subjects – black women and white women. By assessing their dietary intake, Goldberger aim to find conclusions to bolster his hypothesis.The control group continued receiving the same food as before, but the experimental group was given a more balanced diet. Over the two-year span, half of the control group was sick while everyone on the varied diet recovered.

Goldberger’s next objective was to confirm the causation between a poor diet and pellagra. To do this, Goldberger met with Earl Brewer, the governor of Mississippi, in 1915. He requested access to prisoners of the Rankin State Prison Farm to try and induce pellagra in them. The participants were put under a strict and heavily monitored corn-based diet bereft of essential nutrients like meat, milk, or vegetables. Goldberger soon observed that the subjects becoming weaker and weaker as the days went on. After six months, five out of the eleven patients contracted pellagra and the rest had symptoms corresponding with pellagra. Medical ethics were very informal and loosely regulated during that time, especially due to the belief that successful medical ends would justify harsh scientific means.

Despite his careful experiments, Goldberger’s discovery proved socially and politically unacceptable, and he made little progress in gaining support for the treating of pellagra. Consequently, Goldberger became extremely frustrated. He conducted one final experiment, including himself, his wife, and his assistant. They tried to infect themselves with pellagric blood over seven trials. Although they experienced diarrhea and nausea they did not contract the disease. Though Goldberger established a clear link between pellagra and diet, he never discovered the exact nutrient deficiency that caused it. It was not until 1937 that Conrad Elvehjem discovered that pellagra is caused by a dietary lack of the B vitamin niacin, along with reduced levels of the essential amino acid tryptophan. In the scale and complexity of their work, in their dependence on team techniques and interdisciplinary studies, Goldberger and his co-workers were forerunners of a new idiom in the social approach to disease, one appropriate to the problems and techniques of the twentieth century.[1]

However, Joseph Goldberger did not live to see this important discovery. He died in 1929, aged 54.