You are here: Home › space › John Glenn – The First American to orbit the Earth 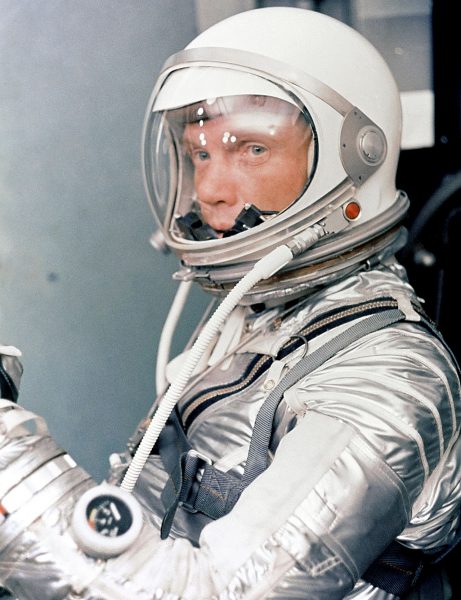 On July 18, 1921, U.S. astronaut and statesman John Herschel Glenn Jr. was born. In 1962 Glenn was the first American to orbit the Earth, circling it three times. Before joining NASA, Glenn was a distinguished fighter pilot in World War II and Korea. In 1998, still a sitting senator, Glenn was the oldest person to fly in space as a crew member of the Discovery space shuttle and the only person to fly in both the Mercury and Space Shuttle programs.

John Herschel Glenn, Jr., was born in Cambridge, Ohio, the son of John Herschel Glenn, Sr., the owner of the Glenn Plumbing Company, and Clara Teresa née Sproat, a teacher. He attended New Concord Elementary School and after graduating from New Concord High School in 1939, Glenn studied engineering at Muskingum College. He earned a private pilot license for credit in a physics course in 1941.

Glenn joined the U.S. Naval Reserve in 1942. He then joined the U.S. Marine Corps in 1943 and flew 59 missions in the South Pacific during World War II. In the Korean War, he flew 90 missions, and in the last nine days of the war, he shot down three MiGs. These were the final air victories of the war, which ended with an armistice five days later. For his service in Korea, Glenn received two more Distinguished Flying Crosses and eight more Air Medals He graduated from the U.S. Naval Test Pilot School at Patuxent River, Maryland, in 1954 and flew on test projects involving the F-8 fighter. He made the first transcontinental flight with an average supersonic speed in 1957 when he flew from California to New York in 3 hours and 23 minutes.[1] Since the air speed of his F-8U Crusader record plane was faster than that of a .45 caliber bullet, Glenn called his project Project Bullet. Glenn’s on-board camera took the first continuous, transcontinental panoramic photograph of the United States.

In 1958, NASA began a recruiting program for astronauts.[1] Glenn barely met the requirements; he was near the age cutoff of forty years and lacked a science-based degree at the time,[50] but he was on a list of 110 test pilots who met the minimum requirements to become an astronaut. The candidates were screened, and the number of potential astronauts was reduced to 32. The candidates underwent a battery of tests, including physical tests to measure stamina and psychological tests to measure maturity, alertness, and motivation. Finally, of the “Mercury Seven,” the U.S. military pilots selected in 1959 to be the first astronauts, Glenn was the oldest.[1]

Glenn served as a backup pilot for Alan B. Shepard, Jr., and Virgil I. Grissom, who made the first two U.S. suborbital flights into space. Then, he was selected for the first orbital flight, Mercury-Atlas 6, and on February 20, 1962, his space capsule, Friendship 7, was launched from Cape Canaveral, Florida. The flight went mostly according to plan, aside from a faulty thruster that forced Glenn to control Friendship 7 manually. Glenn made three orbits, landing nearly 5 hours after launch in the Atlantic Ocean near Grand Turk island in the Turks and Caicos Islands.[1] As the first American in orbit Glenn became a national hero, met President John F. Kennedy, and received a ticker-tape parade in New York City reminiscent of those honoring Charles Lindbergh and other dignitaries.[4]

At 42, Glenn was the oldest member of the astronaut corps and would likely be close to 50 by the time the lunar landings took place. Since it seemed unlikely that he would be selected for Project Apollo missions, he resigned from NASA on January 16, 1964, and announced his Democratic Party candidacy for the U.S. Senate from his home state of Ohio the following day. He became an executive with Royal Crown International, but took an active part in Ohio politics and environmental protection efforts. He won his Senate seat in 1974, carrying all 88 counties of Ohio. He was re-elected in 1980 with the largest margin in Ohio history. Ohio returned him to the Senate for a third term in 1986, again with a substantial majority. In 1992 he was elected again, becoming the first popularly elected senator from his state to win four consecutive terms.[2]

Glenn announced on February 20, 1997 that he would retire from the senate. A year later, NASA invited him to rejoin the space program he had helped to create as a member of the Space Shuttle Discovery Crew. Glenn accepted the invitation and on October 29, 1998, with age 77 became the oldest human ever to venture into space.[3] According to The New York Times, Glenn “won his seat on the Shuttle flight by lobbying NASA for two years to fly as a human guinea pig for geriatric studies“.

At yovisto academic search engine, you may enjoy the video Time of Apollo.