You are here: Home › biology › Severo Ochoa and the Biological Systhesis of RNA and DNA 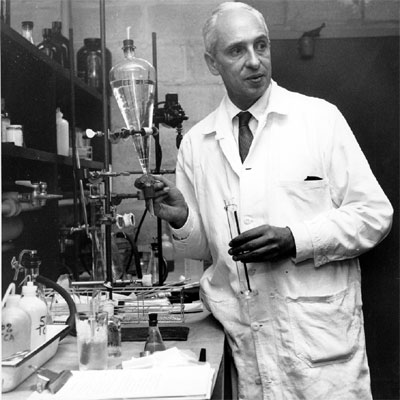 On September 24, 1905, Spanish physicist and biochemist Severo Ochoa de Albornoz was born. Ochoa received the 1959 Nobel Prize in Physiology or Medicine together with Arthur Kornberg for their discovery of the mechanisms in the biological synthesis of ribonucleic acid and deoxyribonucleic acid.

Severo Ochoa was born in Luarca (Asturias), Spain, to Severo Manuel Ochoa, a lawyer and businessman, and his mother Carmen de Albornoz. Ochoa was the nephew of Álvaro de Albornoz (President of the Second Spanish Republic that was exiled, 1947–1951), and a cousin of the poet and literary poet and critic Aurora de Albornoz. His father died when Ochoa was seven, and he and his mother moved to Málaga, where he attended elementary school through high school, and where he completed his baccalauréat in 1921 at a local Jesuit private high school. His interest in biology was stimulated by the publications of the Spanish neurologist and Nobel laureate Santiago Ramón y Cajal.[3] In 1923, Ochoa went to the University of Madrid Medical School to study medicine and where he hoped to work with Cajal, but Cajal retired. He studied with father Pedro Arrupe, and Juan Negrín was his teacher, who encouraged Ochoa and another student, José Valdecasas, to isolate creatinine from urine. The two students succeeded and also developed a method to measure small levels of muscle creatinine.

Ochoa spent the summer of 1927 in Glasgow working with D. Noel Paton, Regius Chair of Physiology, working on creatine metabolism and improving his English skills.[4] During the summer he refined the assay procedure further and upon returning to Spain he and Valdecasas submitted a paper describing the work to the Journal of Biological Chemistry, where it was rapidly accepted, marking the beginning of Ochoa’s biochemistry career. Ochoa completed his M.D. in the summer of 1929 and developed an interest in going abroad to gain further research experience, following an invitation to join Otto Meyerhof’s laboratory at the Kaiser Wilhelm Institute for Biology in Berlin-Dahlem in 1929, a “hot bed” of the rapidly evolving discipline of biochemistry, where Ochoa was meeting and interacting with scientists such as Otto Warburg, Carl Neuberg, Einar Lundsgaard, and Fritz Lipmann.

In 1930 Ochoa returned to Madrid to complete research for his MD thesis, which he defended that year. In 1931, He then began postdoctoral study at the London National Institute for Medical Research (NIMR), where he worked with Sir Henry Dale. There, he worked on the enzyme glyoxalase, a work that marked the beginning of Ochoa’s lifelong interest in enzymes, and likewise at the cutting edge of the rapidly evolving study of intermediary metabolism. In 1933, Ochoa returned to Madrid where he began to study glycolysis in heart muscle. Within two years, he was offered the directorship of the Physiology Section in a newly created Institute for Medical Research at the University of Madrid Medical School. Unfortunately the appointment was made just as the Spanish Civil War erupted, and Ochoa together with his wife decided to leave Spain in 1936, first to Germany, to Meyerhof’s Kaiser Wilhelm Institute for Biology now relocated in Heidelberg, followed by England as Demonstrator and Nuffield Research Assistant at the University of Oxford, and ultimately to the United States.

The Nobel Prize in Physiology and Medicine

In 1942 Ochoa was appointed Research Associate in Medicine at the New York University School of Medicine and there subsequently became Assistant Professor of Biochemistry (1945), Professor of Pharmacology (1946), Professor of Biochemistry (1954), and Chairman of the Department of Biochemistry. In 1956, he became an American citizen and in 1959, Ochoa was awarded the Nobel Prize for Physiology or Medicine for his work on the synthesis of RNA. Ochoa’s research has dealt mainly with enzymatic processes in biological oxidation and synthesis and the transfer of energy. It has contributed much to the knowledge of the basic steps in the metabolism of carbohydrates and fatty acids, the utilization of carbon dioxide, and the biosynthesis of nucleic acids. It has included the biological functions of vitamin B1, oxidative phosphorylation, the reductive carboxylation of ketoglutaric and pyruvic acids, the photochemical reduction of pyridine nucleotides in photosynthesis, condensing enzyme – which is the key enzyme of the Krebs citric acid cycle, polynucleotide phosphorylase and the genetic code.[1]

Ochoa continued research on protein synthesis and replication of RNA viruses until 1985, when he returned to Spain and gave advice to Spanish science policy authorities. Ochoa was also a recipient of U.S. National Medal of Science in 1978. Severo Ochoa died in Madrid, Spain on November 1, 1993, aged 88.