You are here: Home › biology › Santiago Ramón y Cajal and the Microscopic Structure of the Brain 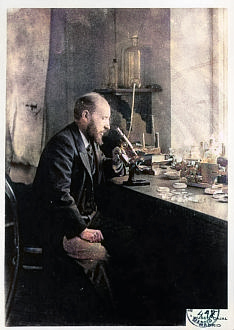 On May 1, 1852, Spanish pathologist, histologist, neuroscientist, and Nobel laureate Santiago Ramón y Cajal was born. Cajal’s original pioneering investigations of the microscopic structure of the brain have led to his being designated by many as the father of modern neuroscience. His medical artistry was legendary, and hundreds of his drawings illustrating the delicate arborizations of brain cells are still in use for educational and training purposes.

“Any man could, if he were so inclined, be the sculptor of his own brain.”
– Santiago Ramón y Cajal, Advice for a Young Investigator (1897), p. xv

How to Motivate to Study Medicine

Ramón y Cajal was born in Petilla de Aragón, Navarra, Spain, the son of a physician with an interest in anatomy, who performed dissections himself. His father’s changing places of work meant that Ramón y Cajal spent his early childhood in several towns and cities in Aragón, in Larrés (1853), Luna (1855), Valpalmas (1856) and Ayerbe (1860).After elementary school in Jaca, he completed high school and baccalaureate in Huesca. At the age of fourteen he also initially trained as a barber. After his family moved to Zaragoza in 1870, he embarked on a medical career, also assisting his father in dissections at the medical school.  He graduated in June 1873 and began his career in the army, where he was appointed to the medical service as a physician.

Cajal as Medical Officer and Professor

Ramón y Cajal became a medical officer in the Spanish Army, serving in an expedition in Cuba in 1874/1875, during the first Cuban War of Independence, where he contracted malaria and tuberculosis. Upon his return to Spain in 1875, the young physician accepted a position as assistant physician at the Faculty of Medicine of the University of Zaragoza. In 1877, he received his doctorate from the Complutense University of Madrid. In 1883, Santiago Ramón y Cajal became Professor of Descriptive and General Anatomy at the University of Valencia, where he worked on his later work Manual de Histología normal y técnica micrográfica (Manual of Normal Histology and Micrographic Technique). In 1887 he moved to the University of Barcelona as Professor of Histology and Pathology and in 1892, in the same disciplines, to the Complutense University of Madrid. In 1900 he became director of the Instituto Nacional de Higiene and Investigaciones Biológicas. 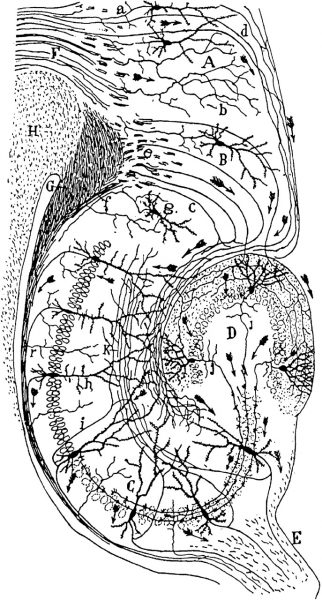 Drawing of the neural circuitry of the rodent hippocampus. By Santiago Ramón y Cajal.

During his early years in medicine, Santiago Ramón y Cajal worked on the pathology of inflammation, the microbiology of cholera as well as the structure of epithelial cells and tissues. In Barcelona, during the 1880s, he learned about Camillo Golgi,[5] who in 1906 shared the Nobel Prize with him. Golgi used potassium dichromate and silver nitrate in order to stain a few neurons a dark black color, while leaving the surrounding cells transparent. When Ramón y Cajal was able to improve this method further, he was able to bring focus on the central nervous system. It became then possible to research the brain and spinal cord, when previously, standard microscopic inspection would be nearly impossible. However, the different results that Golgi’s staining method produced at Golgi and Cajal led to an enmity between the two. But where Golgi felt that the neurons were connected, Cajal argued that the brain consisted of autonomous cells. 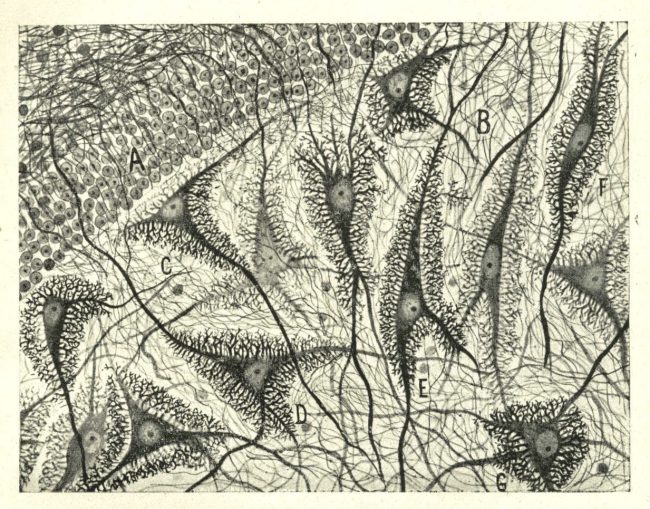 Evidence of the Neuron

Santiago Ramón y Cajal created his first detailed drawings of neural material, covering major regions of the brain. He postulated that the growth direction and the speed of growth of the nerve processes (axons) are controlled by a growth cone at their ends. He had discovered that neuronal cells could receive chemical signals that indicated a direction for growth (chemotaxis). He further demonstrated experimentally that the relationship between nerve cells was not continuous, but contiguous. This discovery later provided evidence for the “neuron doctrine”, today considered the foundation of modern neuroscience. Further, he supported the existence of dendritic spines and discovered a new type of cell, which was subsequently named after him: the interstitial cell of Cajal. In 1894, he suggested that cortical pyramidal cells may become more elaborate with time, as a tree grows and extends its branches.

Further Study of the Brain

Ramón y Cajal conducted intensive studies to demonstrate qualitative differences between the brains of humans and animals. He hypothesized: “The functional superiority of the human brain is very closely related to the amazing abundance and unusual variety of forms of the so-called neurons with short axons“. This was the core of the problem of the cerebral cortex, and finally he had to admit: “… the indescribable complexity of the structure of the grey matter is so complicated that it defies the stubborn curiosity of researchers and will defy many centuries to come“.

During his career, Santiago Ramón y Cajal became the director of the Zaragoza Museum and the director of the Instituto Nacional de Higiene. He was further the founder of the Laboratorio de Investigaciones Biológicas. He received the Nobel Prize in Physiology or Medicine in 1906, together with the Italian scientist Camillo Golgi “in recognition of their work on the structure of the nervous system”.[5]

“The history of civilization proves beyond doubt just how sterile the repeated attempts of metaphysics to guess at nature’ s laws have been. Instead, there is every reason to believe that when the human intellect ignores reality and concentrates within, it can no longer explain the simplest inner workings of life’ s machinery or of the world around us.”
– Santiago Ramón y Cajal, Advice for a Young Investigator (1897), p. 2

The different results that Golgi’s staining method produced in Golgi and Cajal brought about enmity between the two. Cajal developed the method further, staining neurons primarily from chickens and small mammals, and published some 45 papers on the nervous system between 1888 and 1891. But where Golgi held that neurons were connected throughout, Cajal argued that the brain consisted of autonomous cells. When they were awarded a joint Nobel Prize, they were anything but pleased. At least that’s what their acceptance speeches reveal; both men taunted the other’s “willful omissions” and “repulsive errors.”[6]

From 1909 he was an external member of the Royal Society. In 1916 he was elected to the Académie des sciences in Paris and in 1920 to the National Academy of Sciences. In 1913 he was elected Honorary Fellow of the Royal Society of Edinburgh. In his last years he continued to work, preparing publications and reissues, and he devoted himself to his students. Several of them (especially his favorite disciple since 1905, Jorge Francisco Tello, who had succeeded him in his professorship and in the direction of the Institute), at the express wish of Ramón y Cajal himself, accompanied him in his death on October 17, 1934, after the worsening of an intestinal illness that weakened his heart.