You are here: Home › agriculture › John Boyd Orr and his Nutrition Research 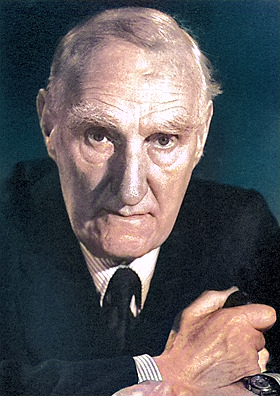 On September 23, 1880, Scottish teacher, doctor, biologist and politician John Boyd Orr, 1st Baron Boyd-Orr was born. Boyd Orr received the Nobel Peace Prize for his scientific research into nutrition and his work as the first Director-General of the United Nations Food and Agriculture Organization (FAO) to eliminate world hunger.

“There can be no peace in the world so long as a large proportion of the population lack the necessities of life and believe that a change of the political and economic system will make them available. World peace must be based on world plenty.”
– Jon Boyd-Orr

John Boyd Orr won a Queen’s Scholarship to study at a teacher training college in Glasgow when he was 19 years old. He also entered the University to study theology there. During his time in Glasgow, Boyd Orr discovered the large amount of poverty present in the city. He observed malnutrition in children and adults as well as rickets. In 1902 he started teaching in the slums, where many children of his class were hungry, ill, and inadequately clothes. Already after a few days, Boyd quit because he realized that there was nothing he could do to relieve their misery.

After teaching here and there and educating himself further, John Boyd Orr returned to the university in order to study biology and medicine. In 1919, he earned his Bachelor’s degree and received his M.D. with honours in 1914. After working as a ship’s surgeon and later joining a general practice, Boyd Orr was offered a two-year Carnegie research scholarship. There he researched malnutrition, protein and creatine metabolism, the effect of water intake on nitrogenous metabolism in humans, and the energy expenditure of military recruits in training.

In 1914 he took charge of a research institute in Aberdeen where he studied animal nutrition. After the outbreak of Word War I, Boyd Orr was given leave to join the British Army. He was posted as Medical Officer to an infantry unit, the 1st Sherwood Foresters and devoted his time to heal the wounded as well as making plans for the battalion’s diet to be supplemented by vegetables collected from local deserted gardens and fields. Due to his engagement, his men were also prevented from getting trench foot by personally ensuring they were fitted with boots a size larger than usual. Later during the war, Boyd-Orr asked to be transferred to the Navy where he was able to continue his research on nutrition on board the HMS Furious.

An Institute in Aberdeen

Boyd Orr had made plans for a large research institute in Aberdeen for many years. In 1920 he was introduced to the business man John Quiller Rowett who agreed to provide some of the funding required. The government agreed to finance half of the costs.  By September 1922 the buildings were nearly completed, and the renamed Rowett Research Institute was opened shortly thereafter by Queen Mary. Boyd Orr managed to acquire further funding for his institute and added a library and a center for accommodating students and scientists attracted by the Institute’s growing reputation. Through the 1920s, Boyd Orr’s own research was devoted mainly to animal nutrition, his focus changed to human nutrition both as a researcher and an active lobbyist and propagandist for improving people’s diets. From 1929 to 1944, Boyd Orr was Consultant Director to the Imperial Bureau of Animal Nutrition, later the Commonwealth Bureau of Nutrition, which was based at the Rowett Research Institute.

The Food and Agriculture Organization

In 1945 John Boyd Orr became the first Director General of the Food and Agriculture Organization (FAO), the United Nations Food and Agriculture Organization. In 1946, he resigned this post and justified it with the attitude of the USA towards his demands. These had brought down the plans by their refusals. Even after his departure, however, he repeatedly warned of a world catastrophe caused by poverty and hunger. In 1948 he was elected President of the International Peace Council and the World Federation of Peace Organisations by the World Democratic Union in Luxembourg. He saw his demands for the sustainable elimination of hunger as an integral part of peace work, and above all demanded the comprehensive provision of loans and technical support to poor nations for the development of modern agriculture and the supply of food.

In 1949, the same year in which he was awarded the Nobel Peace Prize, he was appointed Baron Boyd-Orr, of Brechin Mearn in the County of Angus to the hereditary nobility and appointed to the British House of Lords. In 1952 he took over the chairmanship of the World Economic Conference in Moscow. He died on 25 June 1971 in Newton, Scotland, at age 90. His title of nobility expired upon his death.