You are here: Home › astronomy › Rudolf Wolf and the Discovery of the Sunspot Cycle 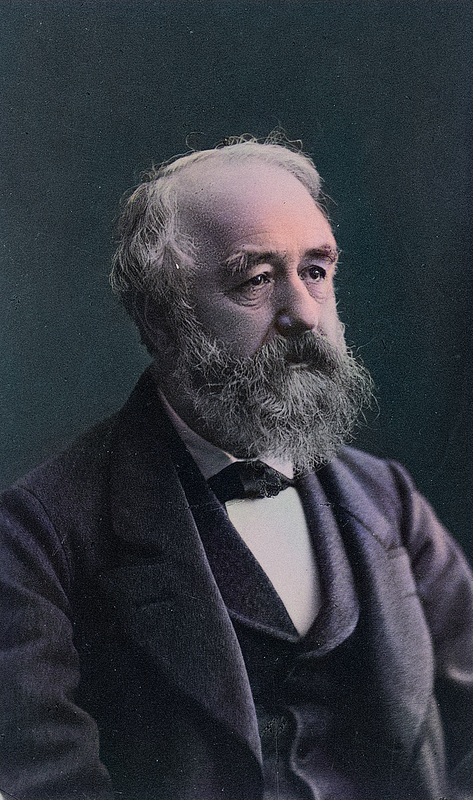 On July 7, 1816, Swiss astronomer and astronomical historian Rudolf Wolf was born. Wolf’s main contribution was the discovery of the 11 year sunspot cycle and he was the co-discoverer of its connection with geomagnetic activity on Earth.

Johann Rudolf Wolf was born in Fällanden, near Zurich, to Regula Gossweiler and Johannes Wolf, who was a minister in the Church. After studying at the Zurich Industrieschule, Wolf attended the University of Zurich, and moved to Vienna in 1836, studying there for two years before going to Berlin in 1838, where he attended lectures by Encke and Dirichlet.[4] In 1838 he visited Carl Friedrich Gauss,[5] then in the following year he became a lecturer in mathematics and physics at the University of Bern. In addition, he became lecturer of astronomy there in 1844, and director of the Bern Observatory in 1847. In 1853 he became associate professor at the University of Bern and in 1855 he went to Zurich as a teacher of mathematics at the upper grammar school and was simultaneously professor of astronomy at the Polytechnic and at the University of Zurich.

The Recording of Sunspots

By the time when he took over the chair of astronomy at both the University of Zurich and the Polytechnic, Wolf was greatly impressed by the discovery of the sunspot cycle by Heinrich Schwabe, an amateur astronomer in Dessau who was working as a pharmacist. Schwabe observed the Sun because he was trying to find a planet inside the orbit of Mercury. His idea was to detect it when it crossed the disk of the Sun so he began to make a systematic record of the spots on the Sun, every day when visibility allowed, beginning in 1826. By 1843 he had begun to suspect that there was some regularity in the sunspots he was recording and published Solar Observations during 1843 in which he suggested that sunspots might follow a period of about 10 years. Wolf, who at that time was in Bern, was fascinated and in 1847 he began his own observational record of sunspots. In the following year he devised a system which is now known as ‘Wolf’s sunspot numbers‘. This system, which gave a weighted number of sunspots where groups of sunspots were given a higher weight, is still in use for studying solar activity by counting sunspots and sunspot groups.

By 1868 Wolf had a more or less reliable sunspot number reconstruction back to 1745, and pushed his reconstruction all the way back to 1610, although the paucity of data effectively rendered these older determinations far less reliable. From this data Wolf was the first to calculate an accurate length of the cycle, obtaining a value of 11.1 years. Wolf also was the first to note the possible existence in the sunspot record of a longer modulation period of about 55 years. In 1852 he became was the co-discoverer of the connection between the sunspot cycle and geomagnetic activity on Earth. Wolf and others also noted a similar correspondence between sunspot cycle and frequency of auroral activity. Wolf then sought a similar peridiocity in various meteorological phenomena, but without conclusive results. He continued to publish reports on sunspot numbers until his death.

He was also a science historian, published books on the history of astronomy and four volumes of biographies on the cultural history of Switzerland, which he supplemented with numerous articles in journals. Wolf was a very productive writer. Among other things, his history of surveying in Switzerland is still quoted today. He was president of the Geodetic Commission of Switzerland from 1861 to 1893 and was involved in a new precision survey of Switzerland. He was also a pioneer of meteorology in Switzerland and was a member of the Swiss Meteorological Commission since its foundation in 1861. From 1866 to 1881 he was its president and first director of the Central Meteorological Institute of Switzerland. In 1850 he carried out extensive series of measurements on Buffon’s needle problem. Rudolf Wolf died on December 6, 1893 in Zürich at age 77.