You are here: Home › physics › Rudolf Clausius and the Science of Thermodynamics 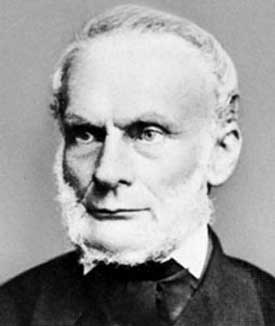 On January 2, 1822, German physicist and mathematician Rudolf Julius Emanuel Clausius was born. He is considered one of the central founders of the science of thermodynamics, who introduced the concept of entropy in 1865.

“If for the entire universe we conceive the same magnitude to be determined, consistently and with due regard to all circumstances, which for a single body I have called entropy, and if at the same time we introduce the other and simpler conception of energy, we may express in the following manner the fundamental laws of the universe which correspond to the two fundamental theorems of the mechanical theory of heat.
1. The energy of the universe is constant.
2. The entropy of the universe tends to a maximum.”
– Rudolf Clausius, Ninth Memoir. On Several Convenient Forms of the Fundamental Equations of the Mechanical Theory of Heat.(1867)

Clausius was born in Köslin (now Koszalin, Poland) in the Province of Pomerania in Prussia. His father was a Protestant pastor and school inspector. However, Rudolf Clausius moved to Stettin (now Szczecin, Poland), where he attended a grammar school. He entered the University of Berlin around 1840, being mostly interested in history but he decided to focus on mathematics and physics. It is believed that around 1847, Clausius submitted his dissertation on the problem of reflected light in the sky, to Halle University. His first work on the mechanical theory of heat was titled “Über die bewegende Kraft der Wärme” and was published in 1850 and it is probably his most important and most influential work. Fortunately for Clausius, the paper’s importance was noticed quickly and he was invited to the post of Professor at the Royal Artillery and Engineering School at Berlin in the same year. [1,2]

The New Theory of Thermodynamics

“Heat can never pass from a colder to a warmer body without some other change, connected therewith, occurring at the same time.”
– Rudolf Clausius, in [13] (1854)

After the discovery of the law of conservation of energy (1st law of thermodynamics) by Julius Robert von Mayer,[8] James Prescott Joule and Hermann von Helmholtz, a new thermodynamics had to be found, especially since William Thomson (later Lord Kelvin) had clearly shown that there was a contradiction between Carnot’s process and conservation of energy. The theory of heat at the time was called the caloric theory and was based on the axioms that the heat in the universe conserved and that the heat in a substance is a function of the state of the substance. Clausius stated in his 1850 paper, that these assumptions were false and he gave two laws of thermodynamics to replace the incorrect assumptions.

His explanations included the nature of free heat and latent heat. In the First Law of Thermodynamics it was already proven that both axioms of the caloric theory are false. The paper also contained a version of the Second Law of Thermodynamics and he kept working on the law for the next 15 years, trying to put the law into a simpler form. In his work, Rudolf Clausius mentioned Sadi Carnot‘s principle of the efficiency of heat engines.[9] The Clausius-Clapeyron equation appears which expresses the relation between the pressure and temperature at which two phases of a substance are in equilibrium. In his famous paper, Clausius understood entropy as the quantity that remains invariant during changes of volume and temperature in a Carnot cycle. However, he did not name this concept back then.

Dispute with Lord Kelvin and Entropy

Following his investigations and his published works, Clausius faced several disputes with especially Thomson and Tait on the discovery of the theory of heat and its real origin.[7] Many historians believe that Clausius made more use of the works and thoughts of others than he might have admitted. However, his great contribution to physics remains the idea of the irreversible increase in entropy. [1] In 1865, Clausius gave the first mathematical version of the concept of entropy, and also gave it its name. Clausius chose the word because the meaning (from Greek ἐν en “in” and τροπή tropē “transformation”) is “content transformative” or “transformation content”. He used the now abandoned unit ‘Clausius’ (symbol: Cl) for entropy. The landmark 1865 paper in which he introduced the concept of entropy ends with the following summary of the first and second laws of thermodynamics:

In 1870 Clausius stated the virial theorem, which is a relationship between the time average of the kinetic energy and the time average of the potential energy of a closed stationary physical system. It thus has relation to mechanics and to a closed thermodynamic system. Clausius introduced the mean free path into physics in 1857, a fundamental concept in statistical mechanics. In 1875, Clausius also published a general law of electrodynamics based on ether theory.

Rudolf Clausius became professor of physics at the Polytechnikum in Zurich in 1855 and made contributions to the theory of electrolysis. Clausius became professor of physics at the University of Würzburg in 1867 and at the University of Bonn two years later. He was elected a Fellow of the Royal Society of London in 1868 and received its Copley Medal in 1879. He also received the Huygens Medal in 1870, the Poncelet Prize in 1883. [1,2]