You are here: Home › physics › Julius von Mayer – Energy can neither be created or destroyed 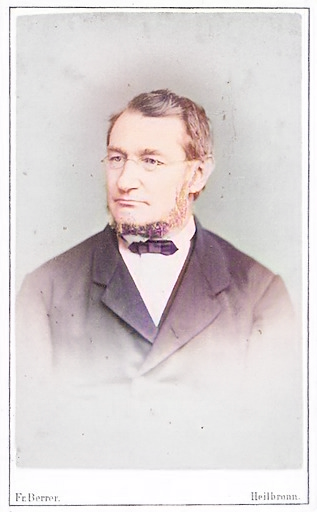 On November 25, 1814, German physician and physicist Julius Robert von Mayer was born. He is best known for enunciating in 1841 one of the original statements of the conservation of energy or what is now known as one of the first versions of the first law thermodynamics, namely that “energy can be neither created nor destroyed“.

“Nature has put itself the problem of how to catch in flight light streaming to the Earth and to store the most elusive of all powers in rigid form. The plants take in one form of power, light; and produce another power, chemical difference.”
— Julius Robert von Mayer, Die organische Bewegung in ihrem Zusammenhange mit dem Stoffwechsel (1867)

Julius Robert Mayer grew up in Heilbronn as the youngest of three sons of the pharmacist Christian Mayer in the rose pharmacy in Heilbronn. He came from a distinguished Heilbronn family and is related to protestant reformator Philipp Melanchthon and philosopher Johannes Reuchlin. It is believed that already as a child, Julius Mayer showed interest with mechanical mechanisms and is believed to have performed various experiments of the physical and chemical variety. Julius Mayer studied medicine at the University of Tübingen. In 1838 he earned his doctorate and Staatsexamen. Between 1837 and 1838 he had been suspended from the university for one year because of his participation in an unauthorised student fraternity and “unauthorised visit to a museum ball in unseemly clothes“.

After his studies, Mayer stayed in Paris and later left as a ship’s physician on a Dutch three-mast sailing ship Java for a journey to Jakarta. It is believed that while on the ship, Mayer made the observation that storm-whipped waves are warmer than the calm sea started him thinking about the physical laws, in particular about the physical phenomenon of warmth and the question whether the directly developed heat alone (the heat of burning), or the sum of the quantities of heat developed in direct and indirect ways are to be accounted for in the burning process. After his return in February 1841, Mayer devoted all his energies to solving this task.

1841 he settled in Heilbronn, was elected as Oberamtswundarzt (Chief Wound Doctor). In Heilbronn he met his friend the mathematics and physics teacher Carl Wilhelm Baur again, whom he had first met in Paris, with whom he had correspondence from 1841 to 1844, and who taught him mathematics and mechanics. Mayer suspected that the heat production of the human body decreases at high temperatures, since his physiological observations in the tropics revealed an unusually bright red color of venous blood, which he attributed to a reduced “burning” of oxygen.

During 1841, Mayer completed his first scientific paper titled “On the Quantitative and Qualitative Determination of Forces“, in which he postulated a “conservation law of force” (meaning energy). As it contained fundamental physical errors, it was initially not published. Next, Mayer turned his enthusiasm towards motion. He presented a value in numerical terms for the mechanical equivalent of heat. He also was the first person to describe the vital chemical process now referred to as oxidation as the primary source of energy for any living creature. In 1848 he calculated that in the absence of a source of energy the Sun would cool down in only 5000 years, and he suggested that the impact of meteorites kept it hot.

The Law of Conservation of Energy

However, owing to Mayer’s lack of advanced training in physics, it contained some fundamental mistakes and was not published. Further discussions with physicist Johann Gottlieb Nörremberg gave Mayer a number of valuable suggestions on how the idea could be examined experimentally. For instance if kinetic energy transforms into heat energy, water should be warmed by vibration. Mayer managed to perform the demonstration and to determine the quantitative factor of the transformation, calculating the mechanical equivalent of heat.

The result of his investigations was published 1842 in the May edition of Justus von Liebig‘s Annalen der Chemie und Pharmacie.[9] It was translated as Remarks on the Forces of Inorganic Nature. Mayer further specified the numerical value of the mechanical equivalent of heat: at first as 365 kgf·m/kcal, later as 425 kgf·m/kcal; the modern values are 4.184 kJ/kcal for the thermochemical calorie and 4.1868 kJ/kcal for the international steam table calorie. It is implied that, although work and heat are different forms of energy, they can be transformed into one another. This law is called the first law of the caloric theory and led to the formulation of the general principle of conservation of energy, definitively stated by Hermann von Helmholtz in 1847.[4]

Julius von Mayer was aware of the great importance of his discovery, but his inability to express himself scientifically, his penchant for speculation, and his confessional religiosity did not earn him the desired reputation as a scientist. Contemporary physicists rejected his theorem of energy conservation. Even from the great physicists Hermann von Helmholtz and James Prescott Joule he experienced unworthy hostility. Mayer’s qualification in physical questions was doubted and slandered.

After two of his children died in 1848, his nerves were completely shattered. A suicide attempt on 18 May 1850 was followed by stays in the Kennenburg sanatoriums near Esslingen and Winnenden. After his release he was a broken man. 1860 he ventured again timidly to the public. In the meantime, however, his scientific fame had grown. Thus he received a late appreciation of his achievement, although he could not enjoy it properly any longer. His creative urge was gone. Julius von Mayer remained at home, devoted his last years to the medical profession and died in 1878 at the age of 63.