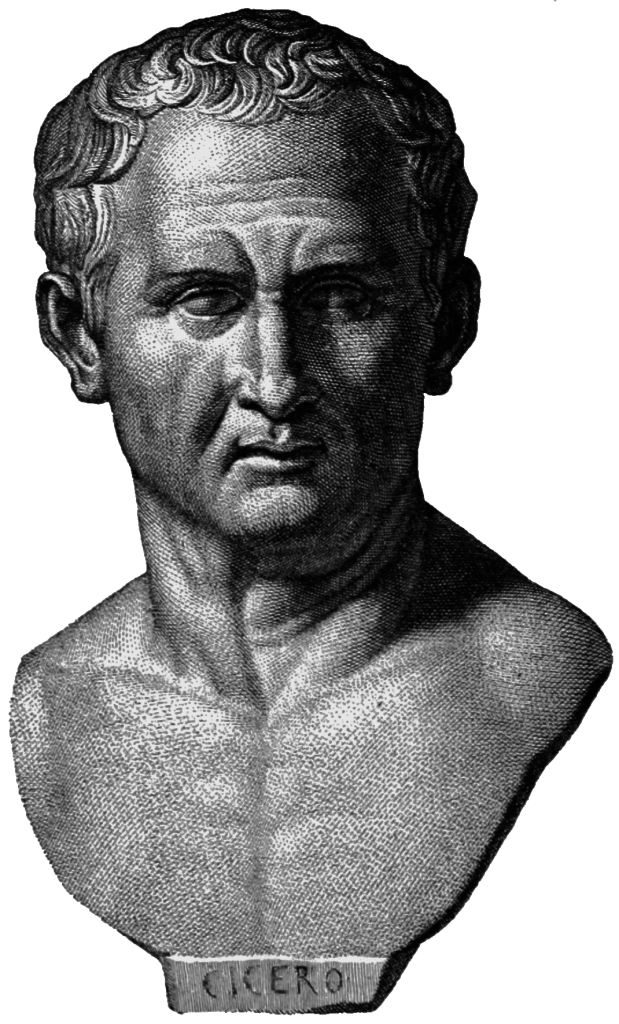 On January 3, 106 BC, Roman philosopher, politician, lawyer, orator, political theorist, consul and constitutionalist Marcus Tullius Cicero was born. Besides his work as politician, he is widely considered one of Rome’s greatest orators and prose stylists. His influence on the Latin language was so immense that the subsequent history of prose in not only Latin but European languages up to the 19th century was said to be either a reaction against or a return to his style.

“As for me, I cease not to advocate peace. It may be on unjust terms, but even so it is more expedient than the justest of civil wars.”
— Marcus Tullius Cicero, Epistulae ad Atticum (Letters to Atticus) Book VII, Letter 14, section 3;

Cicero was born in 106 BC in Arpinum, a hill town 100 kilometers southeast of Rome to a well-to-do family of the equestrian order. Cicero’s cognomen comes from the Latin for chickpea, cicer. Cicero was educated in the teachings of the ancient Greek philosophers, poets and historians. According to Plutarch, Cicero was an extremely talented student, whose learning attracted attention from all over Rome, affording him the opportunity to study Roman law under Quintus Mucius Scaevola. Cicero wanted to pursue a public career in politics along the steps of the Cursus honorum. In 90 BC–88 BC, he served both Gnaeus Pompeius Strabo and Lucius Cornelius Sulla as they campaigned in the Social War, though he had no taste for military life, being an intellectual first and foremost.

Cicero started his career as a lawyer around 83–81 BC. His first major case, of which a written record is still extant, was his 80 BC defense of Sextus Roscius on the charge of patricide, a courageous move because patricide was considered an appalling crime and the people whom Cicero accused of the murder, were favorites of the dictator Sulla. In 79 BC, Cicero left for Greece, Asia Minor and Rhodes, perhaps because of the potential wrath of Sulla. Cicero traveled to Athens and consulted different rhetoricians in order to learn a less physically exhausting style of speech. His first public office was as one of the twenty annual quaestors, a training post for serious public administration in a diversity of areas. Cicero served as quaestor in western Sicily in 75 BC and demonstrated honesty and integrity in his dealings with the inhabitants. As a result, the grateful Sicilians asked Cicero to prosecute Gaius Verres, a governor of Sicily, who had badly plundered the province. His prosecution of Gaius Verres was a great forensic success competing with the prominent lawyer of a noble family Quintus Hortensius Hortalus, against whom Cicero won the case in a series of dramatic court battles. His unique style of oratory set him apart from the flamboyant Hortalus. Upon the conclusion of this case, Cicero came to be considered the greatest orator in Rome. 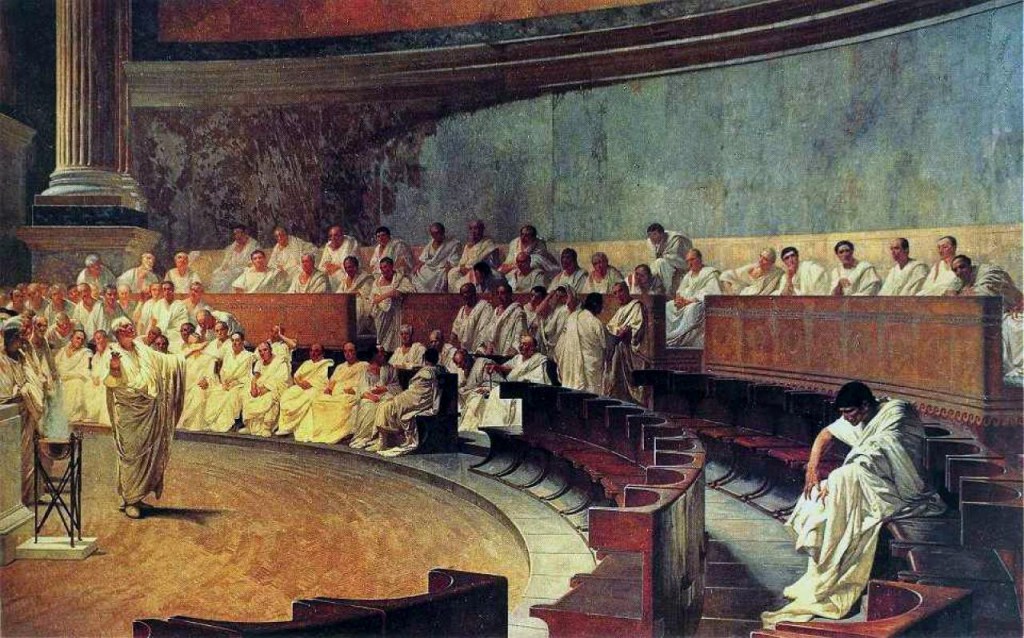 Cicero was neither a patrician nor a plebeian noble; his rise to political office despite his relatively humble origins has traditionally been attributed to his brilliance as an orator. He was both an Italian eques and a novus homo, i.e. being the first in his family to serve in the Roman Senate. Presumably in 79 BCE, he was married to Terentia. Most likely a marriage of convenience, Terentia came from the socially and economically noble family, Terenti Varrones, and was purportedly more interested in Cicero’s career than in their household management (somehow this reminds me of ‘House of Cards’...). Cicero successfully ascended the cursus honorum, holding each magistracy at or near the youngest possible age: quaestor in 75 BC (age 31), aedile in 69 BC (age 37), and praetor in 66 BC (age 40), when he served as president of the “Reclamation” (or extortion) Court. He was then elected consul at age 43.

“Quo usque tandem abutere, Catilina, patientia nostra? (To what length will you abuse our patience, Catiline?)”,
— Marcus Tullius Cicero, In Catilinam I – Against Catiline (63 B.C)

Another challenging move by the incredulous philosophical politician was his exposing the Catiline conspiracy in 63 BCE while he was serving his term as consul [4]. The conspiracy was attempting to forcefully take over the Roman state. Cicero ordered the executions of five of the conspirators without a trial. Execution without trial was a risky action to take by the statesman, and earned him both praise and criticism.[1] In 60 BC Julius Caesar invited Cicero to be the fourth member of his existing partnership with Pompey and Marcus Licinius Crassus, an assembly that would eventually be called the First Triumvirate.[7] Cicero refused the invitation because he suspected it would undermine the Roman Republic. When Publius Clodius, whom Cicero had antagonized by speaking and giving evidence against him when he was tried for profanity early in 61, became tribune in 58, Cicero was forced to go into exile. In 57, thanks to the activity of Pompey, he was recalled.

Cicero tried to re-enter politics without big success and concentrated on his literary works. He reluctantly accepted a promagistracy in Cilicia for 51 BC, because there were no other eligible governors. By the time Cicero returned to Rome, Pompey and Caesar were struggling for complete power. He was on the outskirts of Rome when Caesar crossed the Rubicon and invaded Italy in January 49. Cicero’s support was wooed by Caesar, but Cicero thought Caesar had put himself in the wrong by invading Italy. On the other hand, Cicero did not have much confidence in Pompey, who he thought had made a major error in abandoning Italy for Greece. After dithering for some time, he crossed to Greece to join Pompey. Once there he was unable to make himself useful, and after Pompey’s defeat at the battle of Pharsalus, Cicero withdrew his support from those who were determined to continue the struggle and returned to Italy to await Julius Caesar’s return.

The End of the Roman Republic

For the next four years he was largely out of politics, devoting himself to writing and occasionally emerging to make public appearances. He spent the following years composing philosophical dialogues in Latin, and divorced Terentia in 47 BC after thirty years of marriage. Cicero was not involved in the conspiracy against Caesar, though he strongly approved of it. After Caesar’s assassination, he took a major part in establishing a compromise between Mark Antony and those who killed Caesar. Before long he concluded that Antony was as great a threat to the Republic as Caesar had been, Octavian having seized power in Rome by force, reached an agreement with Antony and Lepidus to set themselves up as a second triumvirate. They started by outlawing many of their enemies, and among the first names on the list was Cicero’s. In December 43 B.C.E. he met his death at the hands of Antony’s men with courage and dignity.[3]

“There is nothing so absurd that it has not been said by some philosopher.”
— Marcus Tullius Cicero, De Divinatione – On Divination (44 BC), Book II, chapter LVIII, section 119

Cicero has been traditionally considered the master of Latin prose, with Quintilian declaring that Cicero was “not the name of a man, but of eloquence itself.“[10] The English words Ciceronian (meaning “eloquent”) and cicerone (meaning “local guide”) derive from his name. He is credited with transforming Latin from a modest utilitarian language into a versatile literary medium capable of expressing abstract and complicated thoughts with clarity. Julius Caesar praised Cicero’s achievement by saying “it is more important to have greatly extended the frontiers of the Roman spirit (ingenium) than the frontiers of the Roman empire”[11].

Gregory B. Sadler, Cicero, Greek Philosophy, and the Fall of the Roman Republic – Philosophers in the Midst of History, [12]