You are here: Home › engineering › Richard March Hoe and the Second Printing Revolution 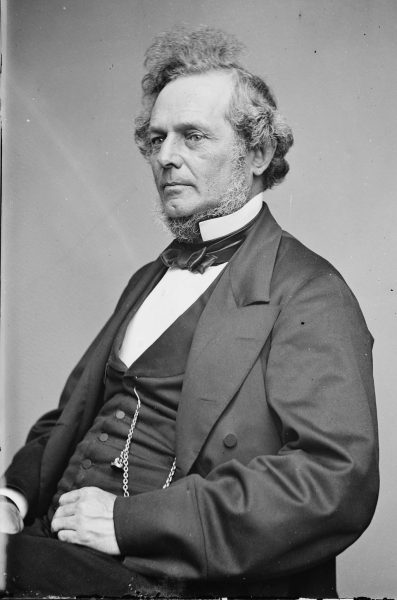 On September 12, 1812, American inventor Richard March Hoe was born. Hoe designed a rotary printing press and related advancements, including the “Hoe web perfecting press” in 1871, which used a continuous roll of paper and revolutionized newspaper publishing.

Richard March Hoe was born in New York City, the son of Robert Hoe, an English-born American mechanic from Leicestershire, who with brothers-in-law Peter and Matthew Smith had established a steam-powered manufactory of printing presses in New York City. At the age of fifteen, Richard joined their enterprise. In 1833, he became a senior member of his father’s firm R. Hoe & Company. After his father’s death that year, Hoe became head of the company. Early on, Hoe added the production of steel saws to his business and introduced improvements to their manufacture. In 1837, he visited England and obtained a patent for a better process of grinding saws. In connection with his factory, Hoe established an apprentice’s school where free instruction was given.

Hoe is most well known for his invention in 1843 of a rotary printing press. The transformation of printing from handcraft to an industry began in 1812. Koenig and Bauer — through the application of iron, steam power and, above all, the cylinder replaced the wood construction, hand power and screw mechanism of the Gutenberg press that had existed for the previous 370 years.[5] In letterpress printing, the image carrier is the raised metal type form. The letterpress process also requires an impression surface, where pressure is applied to transfer the ink to paper. In the course of the industrialization of printing, both the image carrier as well as the impression surface were converted from a flat platen shape to a curved rotary shape.[3]

While these changes dramatically increased productivity, the industrialization of print machinery remained incomplete. Mechanical limitations, the consistency of paper manufacture and print quality issues prevented the cylinder press from reaching speeds greater than a few thousand sheets per hour.[3] Printing by steam had long attracted the attention of persons engaged in the art. The most successful results were the Adams press, the invention of Mr. Isaac Adams, of Boston, Mass., and the Napier press, that of a British artisan. It was the latter which was the means of identifying Hoe with the steam press.[2] Hoe began experimenting in 1829 with the Napier flatbed and cylinder press. For Hoe’s rotary printing press the type was placed on a revolving cylinder, a design that could print much faster than the old flatbed printing press. It received U.S. Patent 5,199 in 1847, and was placed in commercial use the same year. Arunah Shepherdson Abell, publisher of The Sun in Baltimore, was among the first to buy it and put it into use. In its early days, it was variously called the “Hoe lightning press,” and “Hoe’s Cylindrical-Bed Press.” 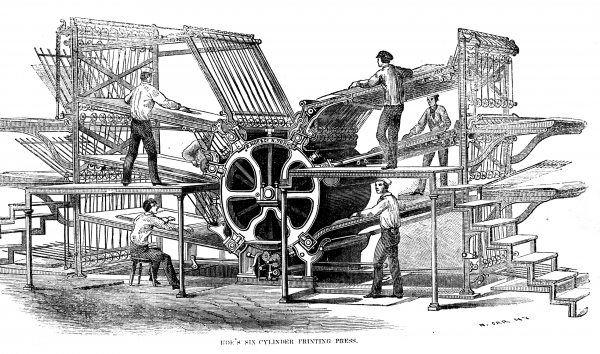 Hoe’s six-cylinder rotary press from the 1860s. The printing plates are located on the large cylinder in the middle.

The resulting eight thousand papers per hour of Hoe’s lightning press revolutionized newspaper printing. Although this new speed-printing made huge daily editions possible, publishers were still limited to single sheet printing. In 1870 Hoe developed a rotary press that printed both sides of a page in a single operation, what he called the “Hoe web perfecting press.” Hoe’s press used a continuous roll of paper five miles long, which was put through the machine at the rate of 240 a minute. As the roll emerged, it passed over a knife which cut pages apart; they were next run through an apparatus which folded the pages for the mail or for carriers. These completely printed and folded newspapers were delivered as quickly as the eye could follow them. It produced 18,000 papers an hour and was used the first time by the New York Tribune.

Hoe’s subsequent additions and various updates of high-speed folding apparatus virtually completed the modern newspaper press by 1875. Hoe presses were manufactured for newspapers around the globe by branch plants in Boston and London, and in New York City.