You are here: Home › communication › Johannes Gutenberg – Man of the Milennium 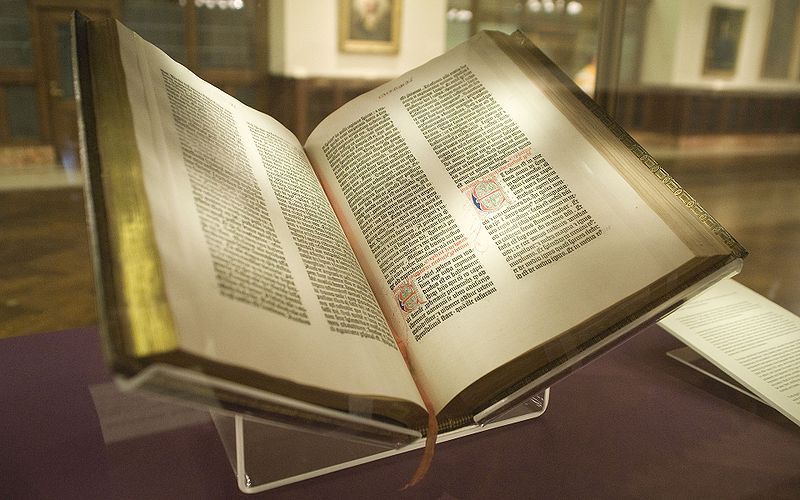 On February 3, 1468, German blacksmith, goldsmith, printer, and publisher Johannes Gensfleisch zur Laden zum Gutenberg – or simply Johannes Gutenberg – passed away. His invention of mechanical movable type printing started the Printing Revolution and is widely regarded as the single most important event of the modern period.

The Art or Printing

The art of printing presumably laid its foundation in Asia around the 6th century, when Buddhistic priests in China built printing block made of wood to print religious illustrations on silk or rag paper. The oldest preserved printed books date back to 868 A.D. and were made by Buddhistic monks in Dun-Huang in western China.[1,2] The first writing material reached Europe in the 12th century and first paper trade is recorded in the near of Valencia, Spain. In the 14th century, paper became more common in Europe, it became cheaper and large quantities could be produced.[3] The highly developed printing techniques from Asia were imported and spread across the continent, while mostly religious illustrations, images concerning the raging plague to warn the citizens, or artistic pictures like these of the German painter and printmaker Albrecht Dürer.[4] In the following years, the printing techniques were continuously developed and during the 15th century, the engraving of copper was commonly used for printing on paper.

The development of further printing techniques was required to distribute a great amount of information to an even greater amount of people. Due to the fact that only a low percentage of the overall society in Europe was able to read or even write, images were first used to transmit these information. Johannes Gensfleisch zum Gutenberg was born in the late 1390’s. However, in the 1890s the city of Mainz as being his hometown declared his official and symbolic date of birth to be June 24, 1400. The son of a merchant, himself being a very curious and inventive goldsmith should developed a new casting technique for mobile letters. In 1411, there was an uprising in Mainz against the patricians, and more than a hundred families were forced to leave. As a result, the Gutenbergs are thought to have moved to Eltville am Rhein (Alta Villa), where his mother had an inherited estate.  It is presumed that he migrated for political reasons to Strasbourg, where the family probably had connections. Furthermore, he is assumed to have studied at the University of Erfurt, where there is a record of the enrolement of a student called Johannes de Altavilla in 1418 – Altavilla is the Latin form of Eltville am Rhein.

Putting it all together

Already in Strasbourg, Gutenberg began to experiment with mobile letters at around 1434 after working for publishers, where he copied several books by hand and studied various printing methods for this job. The stamp procedure as it was common during these years was so complicated that copying books by practiced writers was less time-consuming and more efficient. Gutenberg began to analyze the problems of quick, inexpensive and easy printing and came to realize that everything a human being needed to express could be achieved with only 24 letters of the Latin alphabet and some punctuations. He produced precise letters made of metal, to overcome the difficulty that all letters had to be alike to appear on the paper equally, which also had the advantage that all letters could be used many times during the printing processes. However, Gutenberg was not completely alone with his idea. Also around 1439–40, the Dutch Laurens Janszoon Coster came up with the similar idea of printing.

These and several other adjustments were made to perfect Gutenberg’s printing methods, like the development of the printing press to bring the letters on the paper equally. A great advantage for Gutenberg were his goldsmith experiences and he was soon able to produce 100 letters in just an hour. To adjust the printing template, all letters were placed by the typesetter and the printing block was tinted in ink and placed in the printing press, in which a lightly moistened paper sheet was printed.

“All that has been written to me about that marvelous man seen at Frankfurt [sic] is true. I have not seen complete Bibles but only a number of quires of various books of the Bible. The script was very neat and legible, not at all difficult to follow—your grace would be able to read it without effort, and indeed without glasses.”
— Future pope Pius II in a letter to Cardinal Carvajal, March 1455

The first assumed printed work by Johannes Gutenberg depicted a German poem followed by several grammar books, letters of indulgence and astronomical works. The most important and most influential work depicted by far the Latin Bible, also called Gutenberg-Bibel or B42, because it was printed with 42 lines per column [5]. The whole piece contained over 1200 pages and was to be produced 189 times. Due to Gutenberg’s immense success with the projects he became widely known an honored for his extraordinary achievement. The Bible reached an iconic status due to its beauty and sophistication. It depicted the start of the “Gutenberg Revolution”.

In 1462, during the devastating Mainz Diocesan Feud, Mainz was sacked by archbishop Adolph von Nassau, and Gutenberg was exiled. An old man by now, he moved to Eltville where he may have initiated and supervised a new printing press belonging to the brothers Bechtermünze. In January 1465, Gutenberg’s achievements were recognized and he was given the title Hofmann (gentleman of the court) by von Nassau. This honor included a stipend, an annual court outfit, as well as 2,180 litres of grain and 2,000 litres of wine tax-free. It is believed he may have moved back to Mainz around this time, but this is not certain.

Gutenberg died in 1468 and was buried in the Franciscan church at Mainz, his contributions largely unknown. This church and the cemetery were later destroyed, and Gutenberg’s grave is now lost.

Frank Romano, Gutenberg and History of the Printed Bible, [11]