You are here: Home › history › The Royal Society of London for Improving Natural Knowledge 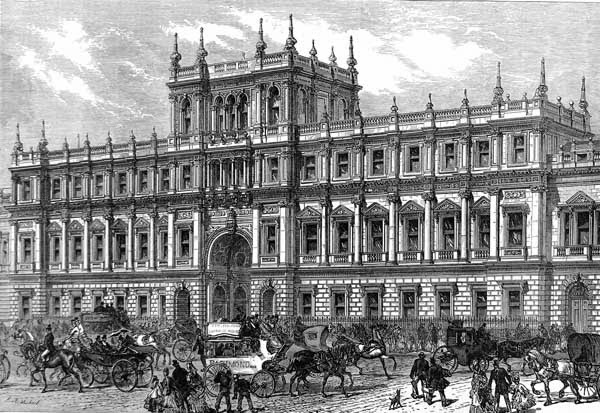 Burlington House in London, where the Royal Society was based between 1873 and 1967

On November 28, 1660, at Gresham College, London, UK, 12 men, including Christopher Wren, Robert Boyle, John Wilkins, and Sir Robert Moray decide to found what is later known as the Royal Society of London for Improving Natural Knowledge, a learned society for science, and possibly the oldest such society still in existence.

“Nullius in Verba.”
(On no man’s word.)
– Motto of the Royal Society

It all started with Roger Bacon

It is said that everything started with Francis Bacon and his work “New Atlantis“, published in 1624.[10] The Latin novel illustrated the possible future of scientific discoveries and knowledge, which inspired several groups of scientists including philosophers and physicians, who met at several places, often Gresham College in London, to discuss their ideas and achievements. The formation of a “College for the Promoting of Physico-Mathematical Experimental Learning” was announced on 28 November, 1660, which marked the beginning of the Royal Society. The 12 men announced to be meeting every week, which was approved by the King. The term Royal Society evolved about two years later, when on 15 July 1662 Charles II granted the company its first Royal Charter, with Lord Brouncker serving at its very first president.[11]

However, the Council of Society was dissatisfied with her and brought about some changes. The second Royal Charter came into force on 23 April 1663. It established the name of the society as Royal Society of London for Promoting Natural Knowledge, recognized Charles II as founder and patron and entitled it to bear a coat of arms. The second Royal Charter was read on 13 May 1663 at a meeting of the members. It also granted the President and the Council the right to appoint suitable members to the Society during a two-month transitional period without election. Members thus elected to the Royal Society on 20 May and 22 June 1663 are known as “Original Fellows”. During the Great Plague of London, the weekly meetings were suspended. The Royal Society’s motto is “Nullius in Verba“, which can be translated as “after no one’s words” (meaning “swear by no one’s words“). It stands for the declared will of society to establish a science that has only been experimentally proven and that is not content with quoting authorities. Although today it seems self-evident, this was a clear break with the prevailing philosophy of science at the time of its foundation.

Soon, Robert Hooke was made responsible for curating the experiments taking place at the society.[7] At first, Robert Hooke performed the experiments himself and covered various scientific fields, while others translated scientific articles in English. They met usually at Gresham College, but relocated for a while after the Great Fire in 1666.[4] During the presidency of Isaac Newton,[3] they received their own institution in Crane Court. In the meantime, the society started gathering books for a small library that rapidly grew. The first two books published were John Evelyn‘s “Sylva” and Robert Hooke’s “Micrographia“. Fellows for the society were elected from the beginning, but there was no official criteria for the elections. Later on in the 1730s, a rule was passed, saying that every elected scientist had to be proposed in a written certificate.

“The Royal Society is a collection of men who elect each other to office and then dine together at the expense of the Society to praise each other over wine and award each other medals.”
— Charles Babbage

The journal Philosophical Transactions has been published since 1665.[12] In the 19th century, the Royal Society started giving financial aid to scientists in order to perform their experiments and to most of their research work there. This resulted in a closer relationship between the society and the government, which began establishing a grant system. Still, the Royal Society managed to stay an independent scientific academy. Its present location, the Carlton House Terrace was obtained in 1967 with over 140 staff members. So far there have been about 8000 Fellows in total. Currently there are 1675 living Fellows. In the last 350 years, the Royal Society had recruited and supported numerous scientists who contributed to Europe’s scientific development significantly. At SciHi, you might have read for instance that Humphry Davy [8] once reported about the isolation of potassium and sodium from different salts by electrolysis to the Royal Society and that the famous physicist and chemist Michael Faraday was voted into the Society in 1824.[9]

Michael Hunter, The Setting up of The Royal Society, [14]