You are here: Home › mathematics › William Brouncker’s Approximation of Pi 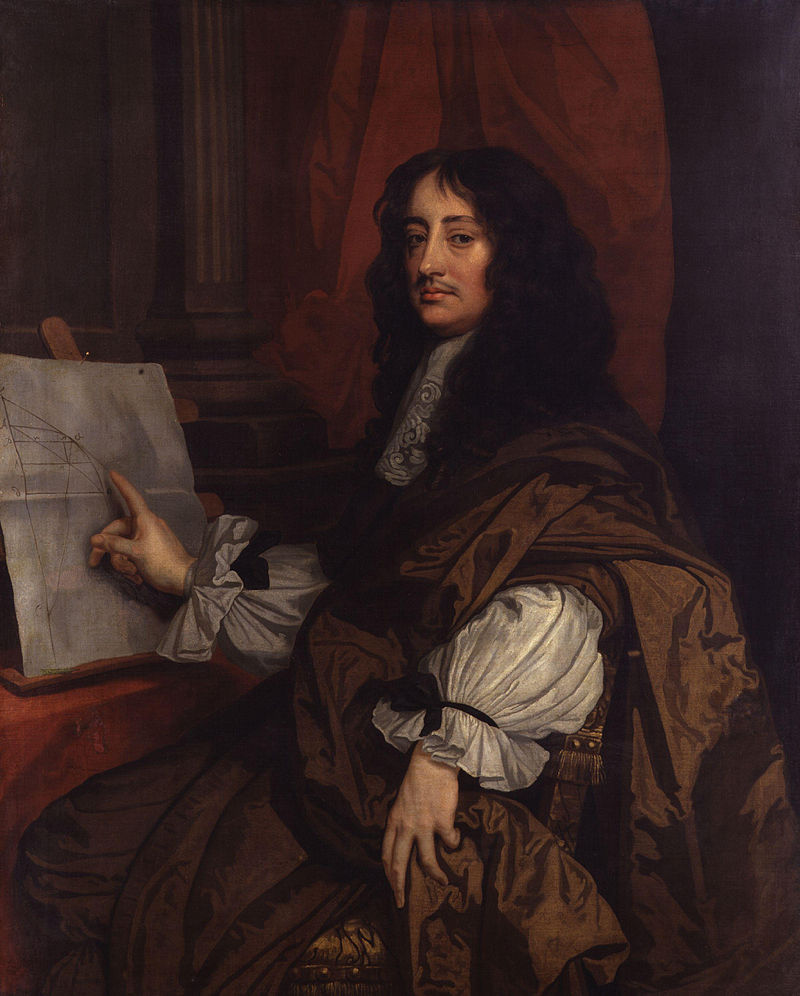 On April 5, 1684, English mathematician William Brouncker, 2nd Viscount Brouncker passed away. Brouncker introduced Brouncker‘s formula, a development of 4/π in a generalized continued fraction, and was the first President of the Royal Society.

Brouncker was born in Castlelyons, County Cork, the elder son of William Brouncker, 1st Viscount Brouncker and Winifred, daughter of Sir William Leigh of Newnham. His father was created a Viscount in the Peerage of Ireland in 1645 for services to the Crown. Although the first Viscount had fought in the Anglo-Scots war of 1639, malicious gossip said that he paid the then enormous sum of £1200 for the title and was almost ruined as a result. According to Samuel Pepys, the diarist “… he gave 1200 pounds to be made an Irish lord, and swore the same day that he had not 12 pence left to pay for his dinner.“[1] But in any case he died only a few months afterwards. Actually, we know little of Brouncker’s early life. 1620 has been given as his date of birth but this is a guess made by historians rather than coming from any specific evidence.[2]

Brouncker entered Oxford University when he was sixteen years old and there he studied mathematics, languages and medicine and obtained a Doctor of Medicine in 1647, and for the next few years devoted himself mainly to mathematics. Shortly after he worked on a publication which would in fact be his only book. Famous French philosopher Rene Descartes had written a paper on music in 1618 but it had never been published.[6] Only after Descartes’ death in 1650 did a Dutch publisher print it as a 58 page pamphlet with the title Renati Descartes Musicae Compendium. In 1653 Brouncker published his English translation of Descartes’ work but he added notes of his own which doubled the size of the work. French mathematician and music theorist Marin Mersenne had proposed a scale of 12 equal semitones after Descartes’ manuscript had been written and in his notes Brouncker proposed a variation of Mersenne’s ideas but he divided the scale into 17 equal semitones.

On Wednesday 28 November 1660 Brouncker was one of a dozen scientists at a meeting in Gresham College which constituted their Society for the Promoting of Physico-Mathematical Experimental Learning which they declared would promote experimental philosophy. The Society at Gresham petitioned King Charles II to recognise it and make a royal grant of incorporation. Brouncker worked hard for the Society ensuring that it was active. In particular he carried out many experiments including some on ballistics, some on the pendulum and a study of the variation of the magnetic needle. The first of these topics he published as Recoil of guns. The Royal Charter which was passed by the Great Seal on 15 July 1662 created the Royal Society of London and the Royal Charter nominated Brouncker as its first President.[2,9] He was reappointed annually, and he guarded his position zealously, possibly holding on to it for too long. He resigned in 1677, in effect at the suggestion of an election, and was succeeded by Sir Joseph Williamson.[3]

Brouncker according to Pepys’ Diary

In 1662, he became Chancellor to Queen Catherine, then head of the Saint Catherine’s Hospital. He was appointed one of the Commissioners of the Navy in 1664 and his career thereafter can be traced in the Diary of Samuel Pepys [1]. Despite their frequent disagreements Pepys on the whole respected Brouncker more than most of his other colleagues, writing in 1668 that “in truth he is the best of them“. Brouncker never married but lived for many years with the actress Abigail Williams (much to Pepys’ disgust) and left most of his property to her. The fire of 1673 which destroyed the Navy Office started in her private closet: this is unlikely to have improved her relations with Samuel Pepys, whose private apartments were destroyed in the blaze.

His mathematical work concerned in particular the calculations of the lengths of the parabola and cycloid, and the quadrature of the hyperbola, which requires approximation of the natural logarithm function by infinite series. He was the first European to solve what is now known as Pell’s equation. He was the first in England to take interest in generalized continued fractions and, following the work of John Wallis, he provided development in the generalized continued fraction of pi. In 1655 he gave a continued fraction expansion of 4/π. Brouncker also gave a method of solving the diophantine equation nx2 + 1 = y2 which evolved during an exchange of letters in 1657-58 discussing a challenge problem posed by Pierre Fermat.[7]

On Brouncker’s death in 1684, his title passed to his brother Henry, one of the most detested men of the era. William left him almost nothing in his will “for reasons I think not fit to mention”.