You are here: Home › literature › C.S. Lewis and The Chronicles of Narnia 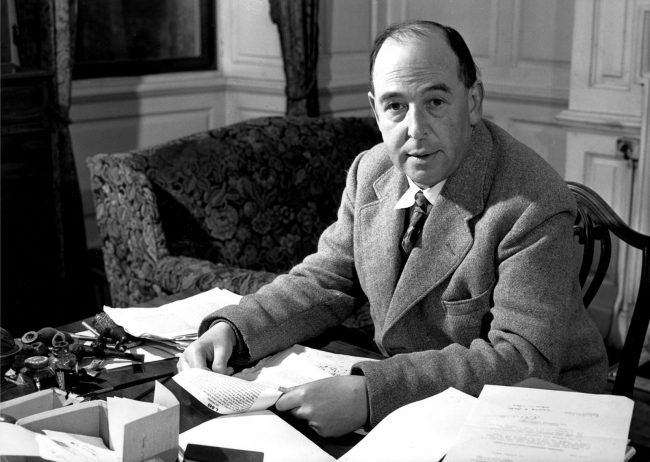 On November 29, 1898, English novelist, poet, academic, medievalist, literary critic, essayist, lay theologian, and Christian apologist Clive Staples Lewis aka C.S. Lewis was born. He was a close friend of J.R.R. Tolkien and is best known for his fictional work, especially The Chronicles of Narnia. Actually, since his childhood days, was was usually referred to as ‘Jack’ and not ‘Clive’.

“I can’t imagine a man really enjoying a book and reading it only once.”
— C. S. Lewis, Letter to Arthur Greeves (February 1932)

Clive Staples Lewis was born in Belfast, Ireland, to Albert James Lewis, a solicitor, and Florence Augusta Lewis, the daughter of an Anglican priest. At the age of four, shortly after his dog Jacksie was killed by a car, he announced that his name was now Jacksie, which later was turned into Jack for the rest of his life. As a boy, Lewis had a fascination with anthropomorphic animals, falling in love with Beatrix Potter‘s stories about tales of Peter Rabbit and often writing and illustrating his own animal stories. Also his nurse Lizzie told Jacksie and his older brother Irish fairy stories, about ‘little people’.

Lewis was first taught at home, when his mother Florence became ill and died soonafter, when Lewis was 10. His father sent him to boarding school in England, which was horrid, and soon closed. After a short interlude in Belfast, Lewis was sent back to England to a school in Malvern, Worcestershire, together with his brother. World War I began in 1914. In 1916 Lewis went to Oxford University and one year later he volunteered to be a soldier. Lewis arrived at the front line in the Somme Valley in France on his nineteenth birthday and experienced trench warfare. On 15 April 1918, Lewis was wounded and two of his colleagues were killed by a British shell falling short of its target. Upon his recovery he was assigned to duty in Andover, England and was demobilized in December 1918 to return to his studies.

“The Value of myth is that it takes all the things you know and restores to them the rich significance which has been hidden by the veil of familiarity.”
— C. S. Lewis, a review on J. R. R. Tolkien’s The Lord of the Rings

Oxford University and the Friendship with J. R. R. Tolkien

After his graduation from Oxford University with a focus on literature and classic philosophy, he became a philosophy tutor at University College in 1924 and one year later was elected a Fellow and Tutor in English Literature at Magdalen College, where he served for 29 years until 1954, when he moved to Cambridge University. During his period of convalescence from war injuries he became increasingly friendly with Mrs Jane Moore – the mother of a close army friend Edward ‘Paddy’ Moore, who was killed in battle and to whom he had promised to look after his mother. Lewis lived with and cared for Moore from June 1921 onward until she was hospitalized in the late 1940s. At Magdalen College, Lewis also joined the group known as The Inklings, an informal collective of writers and intellectuals who counted among their members Lewis’s brother, Warren Lewis, and J.R.R. Tolkien.[8]

It was through conversations with group members that Lewis at age 33 found himself re-embracing Christianity after having become disillusioned with the faith as a youth. For him, this was the most important moment in his life. He would go on to become renowned for his rich apologist texts, where he explained his spiritual beliefs via platforms of logic and philosophy. At the meetings of the Inklings, J.R.R. Tolkien read bits from a story he was writing, which should later become famous as The Lord of the Rings. Lewis concentrated on a more universal form of Christianity seeking to avoid the sectarianism that was common in his native Northern Ireland. He rarely made any specific reference to a particular denomination of Christianity but sought to reinforce the underlying Christian values shared by all Christian faiths. However, he always remained an Anglican, and to the disappointment of Tolkien, he never converted to Roman Catholicism. Later, however, the friendship with Tolkien cooled down noticeably, among other things because he expressed himself negatively about Lewis’ Narnia chronicles. Tolkien essentially mentioned two points of criticism: On the one hand Narnia was too little detailed and not carefully elaborated for him, on the other hand he didn’t think much of the numerous and in his opinion too clumsy popular Christian allusions. In his own works, Christian motifs appear at best in a strongly veiled and generalized form.

The Chronicles of Narnia

“My Dear Lucy,  wrote this story for you, but when I began it I had not realized that girls grow quicker than books. As a result you are already too old for fairy tales, and by the time it is printed and bound you will be older still. But some day you will be old enough to start reading fairy tales again.”
— C. S. Lewis, Dedication of ‘The Lion, the Witch and the Wardrobe’ 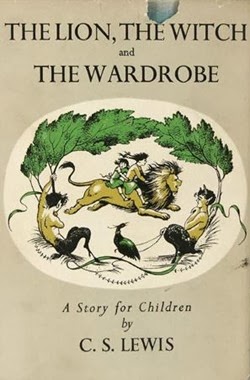 Book cover of the first edition of The Lion, the Witch and the Wardrobe

Lewis began publishing work in the mid-1920s with his first book, the satirical Dymer (1926). After several other titles – including The Allegory of Love (1936), for which he won the Hawthornden Prize – he released in 1938 his first science fiction work, Out of the Silent Planet, the first of a trilogy which dealt sub-textually with concepts of sin and desire. During the 1950s, Lewis started to publish the seven books that would comprise The Chronicles of Narnia children’s series, with The Lion, The Witch and the Wardrobe (1950) being the first release. The story focused on four siblings who, during wartime, walk through an armoire to enter the magical world of Narnia, a land resplendent with mythical creatures and talking animals. Different parts of the series represented a variety of Biblical themes. One prominent character is Aslan, a lion and the ruler of Narnia, who has also been interpreted as a Jesus Christ figure. In addition to Christian themes, Lewis also borrows characters from Greek and Roman mythology as well as traditional British and Irish fairy tales. The books are also known for their illustrations by Pauline Baynes and illustrate various aspects of (very traditional) English social values in a way that makes them accessible to children.

In 1961, Lewis became ill and quit teaching at Cambridge. He died at home in 1963 one week before his 65th birthday from renal failure on same day as the assassination of J.F. Kennedy. Newspapers and TV were full of news of the shooting, while the death of the ‘Narnia’ writer was hardly noticed. Furthermore, famous author Aldous Huxley died the very same day. Since his death, his books and influence have continued to grow. His Chronicles of Narnia have sold over 100 million copies in 41 languages. It has been adapted several times, complete or in part, for radio, television, stage and cinema. Lewis has been rated as one of the top English writers of all time and his books have been translated into numerous languages.

Lewis was already a well-known personality in Great Britain during his lifetime through his books and his popular radio speeches. After his death in 1963 he fell into oblivion for the time being, because the young generation was looking for change and thus the distance to the culture of his parents. Lewis embodied the values and attitudes of the past for them, and he was not particularly respected by Oxford scholars for his popular works. At first he had few advocates like the American episcopalists Chad Walsh and Walter Hooper, who had become his private secretary shortly before Lewis’s death.

In the early 1970s, the British publisher William Collins & Sons acquired the rights to Lewis’ works and distributed them. He benefited from the fact that the Tolkien wave in the USA around 1970 made him and his Narnia children’s books popular again. Especially in the USA literary societies developed, which cultivated the legacy of Lewis.