You are here: Home › astronomy › Robert Hooke and his Famous Observations of the Micrographia 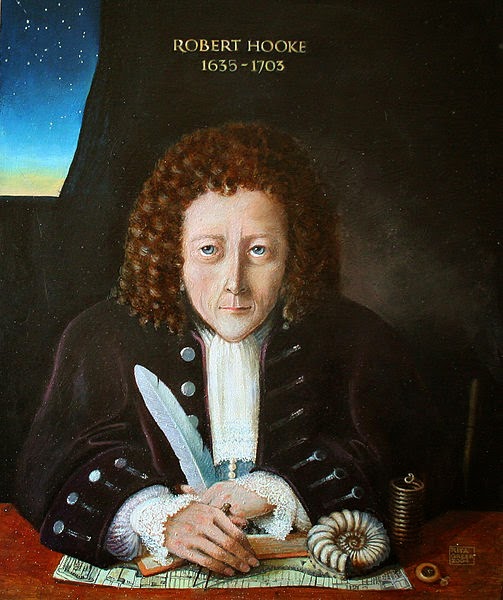 On July 18, 1635 (according to the old Julian calendar), English natural philosopher, architect and polymath Robert Hooke was born. He is known for his discovery of the laws of elasticity, now known as Hooke’s law. Hooke did research in a remarkable variety of fields. He was one of the first men to build a Gregorian reflecting telescope and to suggest that Jupiter rotates. His studies of microscopic fossils are what led him to be one of the first proponents of a theory of evolution.

Robert Hooke was born in the coastal town of Freshwater on the Isle of Wight. The little known about Hookes childhood comes from his fragmentary autobiography, begun on April 10, 1697, which was presented to his first biographer Richard Waller. Hooke remembered a carefree childhood that was marred by occasional attacks of stomach trouble and headaches. He made mechanical toys, dismantled an old copper clock into its components and made the individual parts out of wood. In addition, he made a nearly one metre long, floatable model sailing ship, whose cannons were even said to have been able to shoot. During a visit of the miniature painter John Hoskins (about 1590-1664/5) Hookes graphic talent revealed itself. After the death of his father, Hooke moved to London at the age of 13 and received a good schooling education while extending his abilities in technical drawing and crafting. At the end of January 1649 Hooke was in the care of Richard Busby (1606-1695), in whose household he lived and who taught him. Busby had been headmaster of Westminster School since 1638. During his time in Westminster, Hooke learned Latin fluently, acquired a good knowledge of Greek and was able to learn some Hebrew. He showed talent for mathematics and special skills as a draughtsman. He also learned how to use the lathe and how to play the organ.

In 1653 Hooke left Westminster School in London to continue his education at Christ Church in Oxford. Mediated by Busby, he lived from 1654 in the household of Thomas Willis and assisted him in his chemical experiments in the Beam Hall in Oxford’s St John’s Street. Willis was a member of a group of naturalists led by Wadham College’s Warden, John Wilkins.[5] This group had dedicated itself to the experimental observation of nature as it had been stimulated in 1620 by Francis Bacon in Novum Organum.[6]  During this time Hooke constructed a flying machine and improved the accuracy of the pendulum clocks for Seth Ward, which he used for his astronomical observations.

Already in 1653 Wilkins had invited Robert Boyle to Oxford,[4] who did not make progress with his chemical experiments in Dublin. Boyle finally settled in Oxford in the autumn of 1655, and from the following year Hooke was an assistant to Boyle’s household. Inspired by Otto von Guericke‘s work,[7] Boyle wanted to construct his own improved “air pump”. Under Hooke’s decisive participation the difficult venture finally succeeded around 1659. Together, Boyle and Hooke investigated the properties of the air. Boyle published the results of these experiments, which were completed in December 1659, in The Spring of the Air, published in 1660, in which he described 43 experiments on the design and application of the new air pump and in whose preface he expressly acknowledged Hooke’s merit. On 31 July 1658 Hooke was enrolled at Oxford University. However, he did not earn an academic degree during his time at Oxford. After 1659, the members of Oxford’s.

In 1660, the famous Royal Society was founded and Hooke was one of the first young scientists to grow and impressive reputation internationally while working at the institution. He became a member of the Society three years later and started teaching at the Gresham College even though he never received a scientific degree previously. On 12 November 1662, Robert Moray proposed to employ Hooke as “Curator of Experiments” of the Royal Society. Hooke was unanimously elected to this position by the members of the Society. 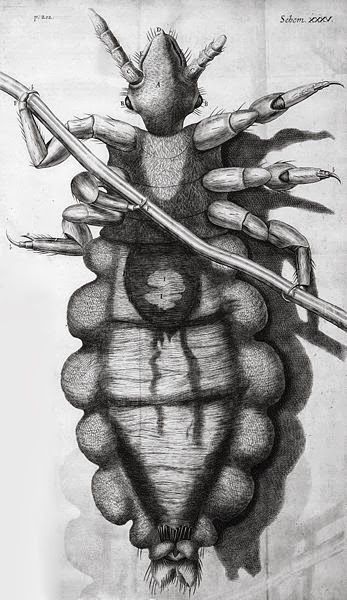 The Quest for Funding

While being occupied with the position as the Royal Society’s curator, he had to prepare weekly experiments and lectures. In 1663, he was given the task to demonstrate one of his observations with his self built microscope at every weekly meeting. The members of the Royal Society were anxious to provide Hooke with a secure income. They were considering a professorship at Gresham College. Hooke did not have an academic degree, which was an obstacle. In September 1663 he was awarded the title of Magister Artium by the Chancellor of Oxford University, Edward Hyde. On 27 July 1664 the Royal Society officially regulated Hookes’ financial remuneration as curator and assured him additional accommodation in or near Gresham College. On 20 March 1665 Hooke finally became professor of geometry at Gresham College. Previously he had already held astronomical lectures there in the semester 1664/1665 on behalf of Walter Pope.

Already in 1663 Hooke began drawing very precise and impressive images of very small insects and objects found in nature. Among the objects observed were a needle tip, the edge of a blade, Venetian paper, petrified wood, a mould and the eggs of the silkworm. His contemporaries found the depictions of the compound eye of a fly, a spider and a mite particularly unusual. Among the materials examined by Hooke was cork. He coined the term cell for “cell” for the cavities he observed under the microscope in cork. After about one year of weekly presentations, the Royal Society supported Hooke’s publication titled Micrographia as a collection of all drawn observations. Among the sixty of Hookes “observations” were some speculations from which the Royal Society distanced itself and asked Hooke to clarify this in a preface. One of these speculations was Hookes theory of matter. He suspected that matter was made up of invisibly small oscillating particles. His thesis was based on an analogy with Marin Mersenne’s finding of a relationship between the frequency and pitch of a vibrating string. Just as the frequency generated by a string depends on its length, thickness and tension, the oscillation frequency of the matter particles depends equally on material, shape and quantity. The different manifestations of solid, liquid and gaseous bodies are explained by the different oscillation frequencies of their particles.

However, Robert Hooke was not only known for observing nature’s smallest objects, he was also a well known astronomer who liked to build and improve observing and measuring instruments. In the 1660’s he was given the task to measure the taurus constellation along with Christopher Wren and as a result, a very detailed drawing of the Pleiades, which he published later on. He often speculated about the movements and structures of planets and their satellites. Hooke performed several experiments on how the moon surface was formed and tried to draw parallels to the history of Earth. Hooke began observing the movements on the surface of the Sun, which he developed a whole new telescope for. In the sixtieth and last “observation” of Micrographia entitled Of the Moon, Hooke wrote down his thoughts on the formation of the crater-covered lunar surface. He developed two theses and tried to confirm them with laboratory experiments. His first thesis attributed the observable shape of the lunar surface to volcanic activity, the second explained it with impacts of objects on the moon. The experiments carried out by Hooke allowed both explanations to be made equally. However, since he could not explain where objects striking the moon could come from, he rejected the second thesis. He also speculated in this context about whether the earth’s surface could be similarly shaped.

On behalf of the Royal Society, Hooke began regular weather observations. He further developed the meteorological measuring instruments necessary for observation and constructed the first forerunner of an automatic weather station. Unlike his contemporaries, Hooke did not regard fossils as mere whims of nature, but saw in them testimonies of extinct creatures. Hookes contribution to the emergence of modern science was long overshadowed by controversies over the priority of some of his inventions and discoveries. He argued with Christiaan Huygens as to which of them built the first spring-loaded watch. Isaac Newton refused Hooke any recognition for the ideas that led him to the mathematical formulation of his gravitational law. Unfortunately, Hooke’s achievements were overshadowed by the accusation of non precise methods in astronomy and his capabilities as astronomer were questioned. In the 20th century the interest in Hooke and his works grew again. He was honored with craters and asteroids named after him and several scientific institutes now carry his name.

On 3 March 1703, Hooke died in London, and a chest containing £8,000 in money and gold was found in his room at Gresham College. Although he had talked of leaving a generous bequest to the Royal Society which would have given his name to a library, laboratory and lectures, no will was found and the money passed to an illiterate cousin, Elizabeth Stephens. Hookes contribution to the emergence of modern science was long overshadowed by controversies over the priority of some of his inventions and discoveries. He argued with Christiaan Huygens as to which of them built the first spring-loaded watch. Isaac Newton refused Hooke any recognition for the ideas that led him to the mathematical formulation of his gravitational law.