You are here: Home › explorer › Georg Forster – Naturalist and Revolutionary 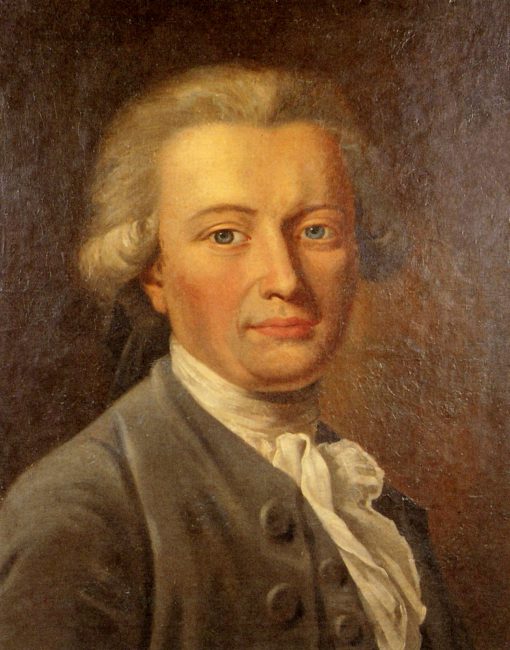 On November 27, 1754, German naturalist, ethnologist, travel writer, journalist, and revolutionary Georg Forster was born. At an early age, he accompanied his father on several scientific expeditions, including James Cook‘s second voyage to the Pacific.[3] His most famous work ‘A Voyage Round the World‘ is considered as the beginning of modern scientific travel literature, which also made him a member of the famous Royal Society.

“Poor human race! What abysses have you yet to work your way up from!”
– Georg Forster

Georg Forster – The Youth of an Explorer

Georg Forster’s life was short, but rich in experiences and experiences that were granted to only a few people in the 18th century. Of all German Enlightenment philosophers, Georg Forster may have seen the most of the world. Georg Forster was the son of the natural scientist and Protestant Reformed pastor Johann Reinhold Forster and his wife Justina Elisabeth, née Nicolai. The father, more interested in philosophy and natural sciences than in theology, took his first-born son, who was only ten years old, on a study trip to the lower reaches of the Volga in 1765. German emigrants who had followed the call of Catherine the Great had recently settled there. Johann Reinhold Forster was commissioned by the Russian government to investigate the administration and living conditions of the Volga Germans. The journey took him from May to August 1765 to Lake Elton in the Caspian Valley, about 160 km east of today’s Volgograd. Already at that time the young Forster was involved in cartographic studies and soil investigations. Father and son spent the following year in Saint Petersburg, where Johann edited his reports. During this time Georg attended the Petri school and learned Russian fluently.

In August 1766, Johann Reinhold Forster moved from St. Petersburg to London in order to build up an existence as a teacher and translator in the land of his ancestors in accordance with his inclinations. Georg accompanied him there and learned English on the long voyage. Already at the age of 13 he published his first book in England: a translation of Lomonosov‘s work Short Russian History, from Russian into English, which received praise in scientific circles.[4]

The Pacific Voyage with James Cook

Due to his father’s great scientific reputation, he was asked by James Cook to join his second voyage, and of course, young Georg should not miss this journey either. His father was supposed to make scientific reports during and after the expedition and his son was taken with as an illustrator. The adventure lasted three years and together, they explored New Zealand, Tahiti, and New Caledonia and proceeded towards the south as far as no explorer did before them. Father and son enjoyed discovering the flora and fauna together, finding several new species of which one was even named after them. But even though the young explorer Forster knew much about botany, he developed a greater interest in ethnology. Quickly, he studied the Polynesian languages and described their life standards and believes as detailed as no one could before.

An Interest in Ethnology

Even until this day, his descriptions are read and studied. He described the different social orders and religions that he found, for example, on the Society Islands, the Friendship Islands, in New Zealand and on Easter Island, and attributed them to the different living conditions in each case. At the same time, he noted that the languages on these widely scattered islands were relatively closely related. Critics often admired his works, because Forster used to differ the societies of the South Pacific in their religious views, living conditions and social orders in contrast to earlier studies. On this day, some of his ethnographic findings from the Cook expedition are displayed in Göttingen, Germany.

A Voyage Around the World

Back home, Georg Forster immediately started writing his famous book ‘A Voyage Round the World‘, which was published in 1778. The work depicted a great milestone in the history of literature and marked the beginning of modern scientific travel books. Forster became famous and his work counts up to this day as one of the most read and most influential travel descriptions. His influence reached as far as Alexander von Humboldt, who deeply admired Forster and later became famous for his travel literature himself. Forster’s writing style was known to be scientific exact as well as exciting and fascinating with numerous philosophical reflexions.[5] 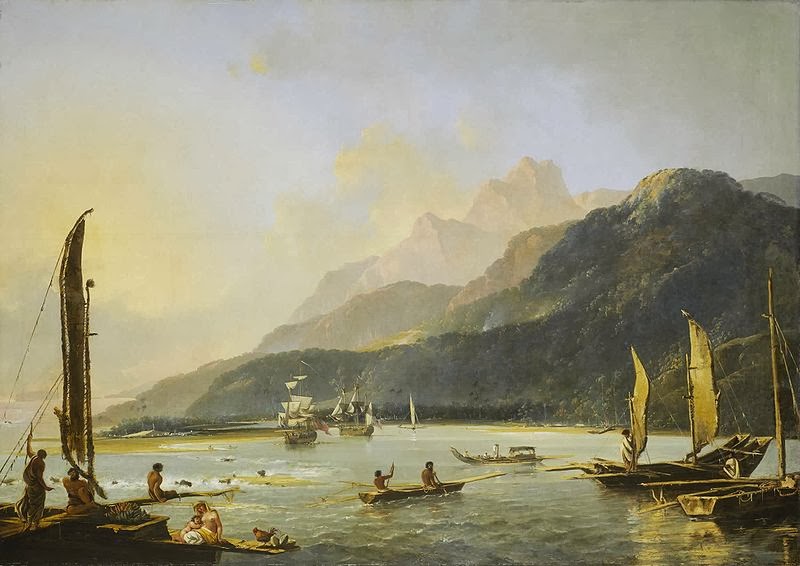 Cook’s ships Resolution and Adventure 1776 in the bay of Matawai (Tahiti); painting by William Hodges

His publication brought Forster scientific honours from all over Europe. The prestigious Royal Society in London accepted the not yet 23-year-old as a member in 1777. In 1780 he was elected a member of the Leopoldina scholarly society. Initially Forster taught natural history at the Collegium Carolinum in Kassel from 1778 to 1784. From this time he also had a lively exchange with the most important representatives of the Enlightenment in Germany, including Lichtenberg, Lessing, Kant, Herder, Wieland and Goethe. He regularly published essays on research and expeditions of his time, for example on Cook’s third journey to the South Seas, in which he himself did not participate, and on the later Bounty expedition. Forster had been in contact with its initiator, the private scholar Sir Joseph Banks, who had accompanied Cook on his first circumnavigation of the world, since the London years. From 1784 to 1787 Forster taught as professor of natural history at the Schola Principis Magni Ducatus Lithuaniae in Polish-Lithuanian Vilnius, today the University of Vilnius. He had not yet received his doctorate and therefore wrote a dissertation (De plantis esculentis insularum oceani australis commentatio botanica) on edible plants of the South Sea islands.

Because of the unsatisfactory situation in Vilnius, Forster was delighted to learn in June 1787 that he had been chosen to head a large Russian Pacific expedition to finance Czarina Catherine the Great. The journey was scheduled to last four years and was to take five ships from England via Madeira, Brazil, the Cape of Good Hope, Australia, New Zealand, the islands of friendship, society and sandwiches to the Pacific coast of America, the Kuril Islands, Japan and China. During the expedition Forster was to receive an annual salary of 2000 rubles and his wife an annual grant of 1000 rubles. Upon his return, he – in the event of his death, his wife – was to receive an annual pension of 1500 rubles for life. In addition, the Russian government paid his debts in Vilnius. Forster was released from his obligations there and returned to Göttingen with his wife in August. However, the expedition did not come about because the Russian-Turkish war broke out in 1787. Therefore, in 1788 Forster accepted the position of the senior librarian of the University of Mainz, which had been offered to him through the mediation of the historian Johannes von Müller (1752-1809).

In the spring of 1790 Forster and the young Alexander von Humboldt undertook an extensive journey from Mainz to the Rhineland, the Austrian Netherlands, Holland, England and Paris.19 He described his impressions in the three-volume work Ansichten vom Niederrhein, von Brabant, Flandern, Holland, England, and France, published between 1791 and 1794. In addition to many economic considerations, the book also contains detailed art-historical considerations that became just as influential for the history of scientific art as A Voyage round the world for ethnology.

Like many other German scholars, he had welcomed the outbreak of the revolution in 1789 as a logical consequence of the Enlightenment. On 21 October 1792, the French Revolutionary Army occupied Mainz. Two days later, on the initiative of Georg Wilhelm Böhmer, the Jakobinerklub Mainz was founded, which Forster joined at the beginning of November after initial hesitation. From the beginning of 1793 he was actively involved in the founding of the Mainz Republic. The first republic on German soil to be built on bourgeois-democratic principles comprised roughly the area on the left bank of the Rhine between Landau and Bingen. Forster became vice-president of the provisional administration and was elected a member of the Rhenish-German National Convention. From January to March 1793 he was editor of Die neue Mainzer Zeitung or Der Volksfreund. In his first article he wrote: “Freedom of the press finally prevails within these walls, where the printing press was invented”. Freedom did not last long, however, for the Mainz Republic existed only until the withdrawal of the French in July 1793. As a member of the National Convention, the first democratic parliament in Germany, he had been sent to Paris to apply for the annexation of the non-viable Mainz Republic to France. Although the order was accepted, it had been fulfilled by the recapture of Mainz by the troops of the anti-French coalition. 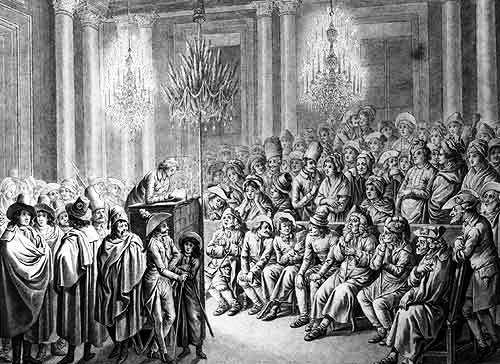 Meeting of the Jakobinerclub Mainz. At the lectern probably Georg Forster.

Due to a decree of Emperor Franz II, which made the cooperation of German “subjects” with the French revolutionary government a punishable offence, Forster forfeited his right to the Reich and was unable to return to Germany. Completely destitute and without his wife, who had already left him together with his children in Mainz, he remained in Paris. There the revolution entered the phase of reign of terror, the terreur of the welfare committee under Maximilien de Robespierre. Forster now became aware of the contradiction between the claim of the revolution to promote the happiness of humanity and the revolutionary practice that could cruelly ignore the happiness and life of the individual human being. Unlike many other German advocates of the revolution, such as Friedrich Schiller, Forster did not turn away from the revolutionary ideals even under the impression of the terror regime. Before the reign of terror reached its climax, Georg Forster died of pneumonia in January 1794, not yet 40 years old, in a small attic apartment in the Rue des Moulins in Paris.

At yovisto academic video search, you may enjoy the Georg Forster lecture on ‘The Aesthetics of Singularity: Time and Event in Postmodernity‘ by Frederic Jameson.