You are here: Home › economics › Robert Malthus and the Principle of Population 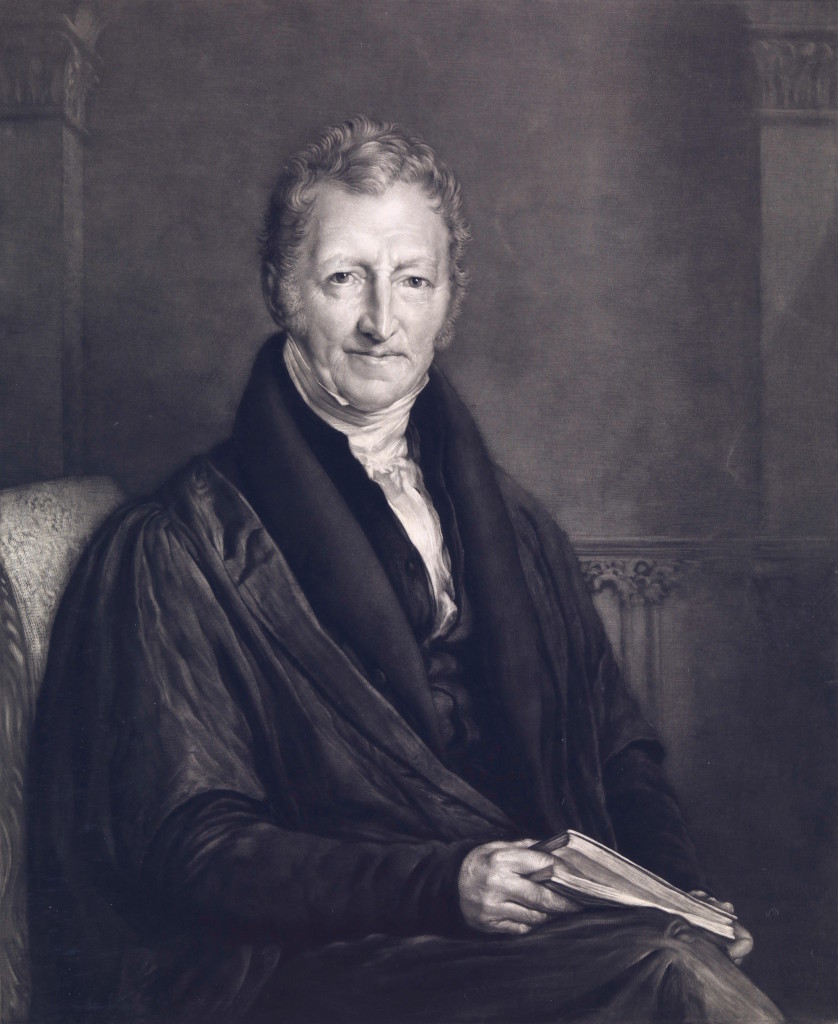 On February 13, 1766, English cleric and scholar Rev. Thomas Robert Malthus was born. His An Essay on the Principle of Population observed that sooner or later population will be checked by famine and disease, leading to what is known as a Malthusian catastrophe. He thought that the dangers of population growth precluded progress towards a utopian society. Malthus placed the longer-term stability of the economy above short-term expediency. His views became influential, and controversial, across economic, political, social and scientific thought.

“Population, when unchecked, increases in a geometrical ratio, Subsistence, increases only in an arithmetical ratio.”
–Robert Malthus, An Essay on The Principle of Population (First Edition 1798, unrevised), Chapter I, paragraph 18, lines 1-2

Robert Malthus was born in The Rookery, a country house in Westcott, near Dorking in Surrey, UK, the sixth child of Henrietta Catherine Graham and Daniel Malthus. He was educated at home in Bramcote, Nottinghamshire, and then at the Warrington Academy from 1782. Two years later, he entered Jesus College, Cambridge and graduated with honors in mathematics. In 1789, he took orders in the Church of England, and became a curate at Oakwood Chapel in the parish of Wotton, Surrey.

“Yet in all societies, even those that are most vicious, the tendency to a virtuous attachment is so strong that there is a constant effort towards an increase of population. This constant effort as constantly tends to subject the lower classes of the society to distress and to prevent any great permanent amelioration of their condition”.
— Malthus, T. R. 1798. An Essay on the Principle of Population. Chapter II.

Robert Malthus became famous for An Essay on the Principle of Population, published in 1798. He affirmed that there were many events, good and bad, that affected the economy in ways no one had ever deliberated upon before. He argued that population multiplies geometrically and food arithmetically. Therefore, the population will eventually outstrip the food supply. The Essay gave rise to the Malthusian controversy during the next decades. The content saw an emphasis on the birth rate and marriage rates. The neo-Malthusian controversy, or related debates of many years later, has seen a similar central role assigned to the numbers of children born.Malthus wrote the original text in reaction to the optimism of his father and his father’s associates (notably Jean-Jaques Rousseau)[12] regarding the future improvement of society. He also constructed his case as a specific response to writings of William Godwin (1756–1836) and of the Marquis de Condorcet (1743–1794).[13]

In his 1798 book An Essay on the Principle of Population, Malthus observed that an increase in a nation’s food production improved the well-being of the populace, but the improvement was temporary because it led to population growth, which in turn restored the original per capita production level. In other words, mankind had a propensity to utilize abundance for population growth rather than for maintaining a high standard of living, a view that has become known as the “Malthusian trap” or the “Malthusian spectre”. Populations had a tendency to grow until the lower class suffered hardship and want and greater susceptibility to famine and disease, a view that is sometimes referred to as a Malthusian catastrophe. Malthus wrote in opposition to the popular view in 18th-century Europe that saw society as improving and in principle as perfectible. He saw population growth as being inevitable whenever conditions improved, thereby precluding real progress towards a utopian society: “The power of population is indefinitely greater than the power in the earth to produce subsistence for man“.

In his second major work, Principles of Political Economy (1820), Malthus examines value, land rent, labor, and labor wages to determine the factors that affect a nation’s prosperity. Prior to Malthus, it was generally assumed that as the population grew, a country’s economic performance increased. However, from Malthusian population theory, population growth outpaces economic growth, resulting in impoverishment and impoverishment of the country. Based on the assumption, still valid today, that raising the general level of education would lead to a decline in the birth rate, Malthus recommended an educational offensive for the lower classes. In his “Essay,” Malthus argued that labor generated by luxury would be of no benefit to the poor if it did not enable them to gain power and independence

Malthus criticized the Poor Laws for leading to inflation rather than improving the well-being of the poor. He supported taxes on grain imports (the Corn Laws), because food security was more important than maximizing wealth. His views became influential, and controversial, across economic, political, social and scientific thought. Pioneers of evolutionary biology read him, notably Charles Darwin and Alfred Russel Wallace. Malthus remains a much-debated writer.[4,5] Malthus was a founding member of the Political Economy Club in 1821; there John Cazenove tended to be his ally, against Ricardo and Mill. In 1823, Malthus contributed the article on Population to the supplement of the Encyclopædia Britannica. He was elected in the beginning of 1824 as one of the ten royal associates of the Royal Society of Literature. He was also one of the first fellows of the Statistical Society, founded in March 1834. In 1827 he gave evidence to a committee of the House of Commons on emigration.

Robert Malthus died suddenly of heart disease in Bath, Sommerset, on 23 December 1834. Malthus’ works are to be understood in the context of the Enclosure Movement, the following impoverishment of the peasants and in a relativization of the poor laws. His criticism was directed in particular against the Speenhamland legislation, which would have caused the then increasing pauperism. Malthus urgently advocated the abolition of the poor laws, and his postulates (via Francis Place) ultimately led to the “new” poor laws of 1834, in which the (Elizabethian) poor relief was massively reduced.

Gregory Clark, The Logic of the Malthusian Model I, [14]