You are here: Home › philosophy › John Wilkins and the Universal Language 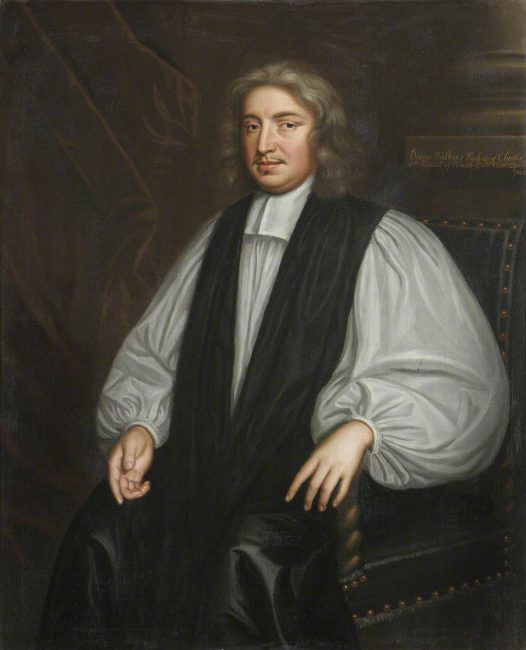 On February 14, 1614, Anglican clergyman, natural philosopher and author John Wilkins was born. Wilkins was one of the founders of the Royal Society and a polymath, although not one of the most important scientific innovators of the period. He is particularly known for An Essay towards a Real Character and a Philosophical Language (1668) in which, amongst other things, he proposed a universal language and a decimal system of measures which was later developed to become the metric system. Moreover, he also wrote “Mercury, or the Secret and Swift Messenger” (1641), the first English-language book on cryptography.

John Wilkins was probably born at Canons Ashby, Northamptonshire, England, to Walter Wilkins, a goldsmith and Jane Dod, the daughter of a well-known conforming Puritan. Wilkins was educated at a school in Oxford and matriculated at New Inn Hall. He then moved to Magdalen Hall, Oxford and graduated with a B.A. degree in 1631, an M.A. degree in 1634. He studied astronomy with John Bainbridge.

After graduating, he tutored in Oxford, then in 1637 was appointed Vicar at Fawsley, a sheep-farming place with little population, dominated by the Knightley family. He was ordained a priest of the Church of England in Christ Church Cathedral in February 1638. He was then chaplain to a number of famous men, including William Fiennes, George the Eighth Lord Berkeley, and Charles Louis. Fiennes was a leading opponent of James I and Charles I in the House of Lords and a supporter of Parliament in the English Civil Wars while Louis was the nephew of King Charles I, the son of Frederick V, and the prince elector Palatine. Wilkins is said to have been appointed to this latter post because of his expertise in mathematics “to which he devoted all his leisure”.

“It is an excellent rule to be observed in all disputes, that men should give soft words and hard arguments; that they should not so much strive to vex as to convince each other.”
– John Wilkins, [12]

Wilkins was one of the group of savants interested in experimental philosophy who gathered round Charles Scarburgh, the royalist physician who arrived in London in summer 1646 after the fall of Oxford to the parliamentarian forces. There are also clear connections to the Wilkins Oxford Philosophical Club, another and less remote precursor to the Royal Society. On 13 April 1648 Wilkins was appointed Warden of Wadham College, Oxford. Wilkins fostered political and religious tolerance and drew talented minds to the college, including Christopher Wren. Although he was a supporter of Oliver Cromwell, Royalists placed their sons in his charge. From those in Oxford interested in experimental science, he drew together a significant group or ‘club’, which by 1650 had been constituted with a set of rules.

Popularizing a Modern View of the Universe

In 1638 Wilkins published his first book The Discovery of a World in the Moon which was in fact appeared anonymously. In 1640 he published, also anonymously, A Discourse concerning a New Planet. Both works are addressed to the general reader rather than experts in the subject, and their aim is to popularize the view of the universe due to Copernicus, Kepler and Galileo. The main argument is that the Moon is not a shining disk but rather it is a world with a landscape like that of the Earth. Of course Wilkins was not the first to put forward such a theory; for example Galileo had argued in a similar way. Perhaps more surprisingly, he believed that the Moon is a habitable planet and he predicts that one day travel to the Moon will be possible.[1]

In 1641, Wilkins published Mercury, or the Secret and Swift Messenger, Showing How a Man May With Privacy and Speed Communicate His Thoughts to a Friend at Any Distance. It mentions such old tricks as baking secret messages into loaves of bread, but Wilkins’ chief interest was cryptography, of which he gives a wealth of examples, all ready for use. But he also deals with cryptology or secret communication by speaking, either by involving the sense in metaphors and allegories or by changing old words or inventing new ones as is done by thieves, gypsies, and lovers. Thus, Mercury is not merely a practical guide in the use and decoding of ciphers, but a broadly based discussion of the means of communication, or what today would be called semiotics.

Upon the Restoration in 1660, the new authorities deprived Wilkins of the position given him by Cromwell; he gained appointment as prebendary of York and rector of Cranford, Middlesex. In 1662 he became vicar of St Lawrence Jewry, London. He suffered in the Great Fire of London, losing his vicarage, library and scientific instruments.[8] Possessing strong scientific tastes, Wilkins was a founding member of the Royal Society and was soon elected fellow and together with with Henry Oldenburg one of the Society’s two secretaries.

Wilkins also wrote on mechanical devices, publishing Mathematical Magick, or the wonders that may be performed by mechanical geometry in 1648. It is an account of the fundamental principles of machines and the first part describes the balance, lever, wheel, pulley, wedge and screw.[1] 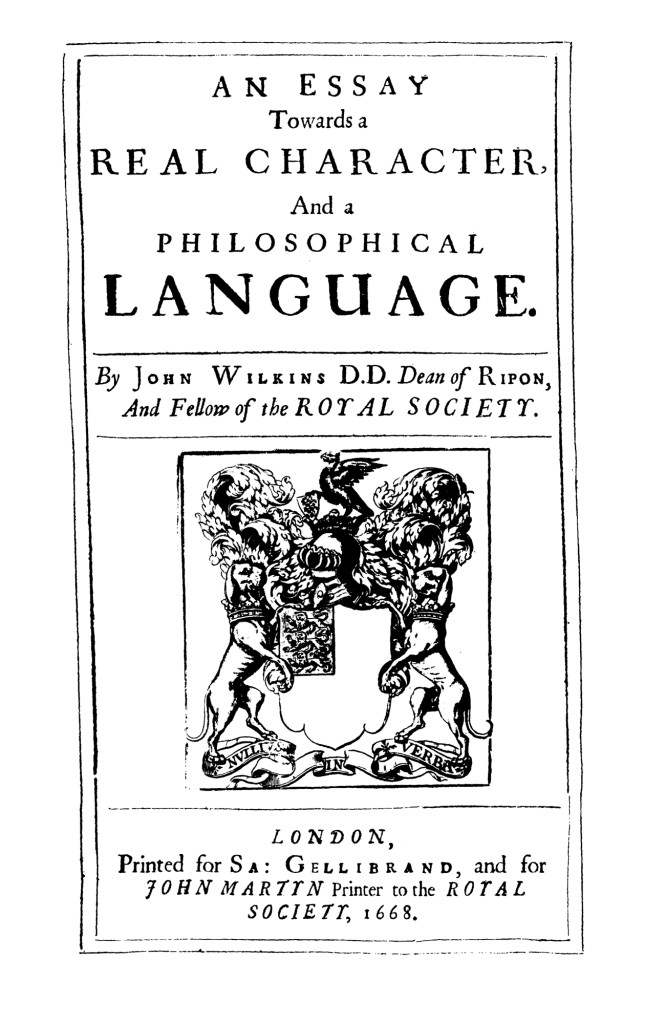 Frontispiece of John Wilkins’s An Essay Towards a Real Character, And a Philosophical Language (1668)

The Philosophical Language of John Wilkins

In 1668, John Wilkins published his Essay towards a Real Character and a Philosophical Language. Wilkins found out, that the inaccuracy of natural language impedes scientific progress. Thus, he had attempted to create a universal language to replace Latin as a completely unambiguous tongue with which scholars and philosophers could communicate with the goal to represent the entire knowledge of the universe. The Essay is the largest and most complete work in a long tradition of speculation and effort to create an artificial language that would, in a contemporary phrase, “repair the ruins of Babel.” On one level a mere universal language would accomplish this aim by removing the obstacle that ordinary languages place in the way of common communication, whether in religion, commerce, or science.[2].

Wilkins based his plan on a few basic principles. He assumed that “as men do generally agree in the same principle of reason, so do they likewise agree in the same internal notion or apprehension of things.” Now, if the common notions of men could be tied to common marks, written or spoken, then mankind would be “freed from that curse in the confusion of tongues, with all the unhappy consequences of it.” These marks would “signify things, and not words,” conjoined “with certain invariable rules for all such grammatical derivations and inflexions, and such only, as are natural and necessary,” all contrived so “as to have such a dependence upon, and relation to, one another,as might be suitable to the nature of the things and notions which they represented.”

The Ballad of Gresham College (1663) [3], a gently satirical ode to the Society, refers to this project:

A Doctor counted very able
Designes that all Mankynd converse shall,
Spite o’ th’ confusion made att Babell,
By Character call’d Universall.
How long this character will be learning,
That truly passeth my discerning.

There is also a famous essay by Jorge Luis Borges referring to John Wilkin’s work on the universal language [4,7]. Also Gottfried Wilhelm Leibniz [5,6] put some thought into the idea of a universal language. Leibniz conceived of a characteristica universalis, an “algebra” capable of expressing all conceptual thought. This algebra would include rules for symbolic manipulation, what he called a calculus ratiocinator. His goal was to put reasoning on a firmer basis by reducing much of it to a matter of calculation that many could grasp. The characteristica would build on an alphabet of human thought. The final goal then, to solve disputes simply by computation was paraphrased by him as “Calculemus!” (Let’s make a calculation) instead of fruitless argumentations.

The Neuroscience of Language and Thought, Dr. George Lakoff Professor of Linguistics, [12]