You are here: Home › paleontology › Fossil Hunter Barnum Brown and the Tyrannosaurus Rex 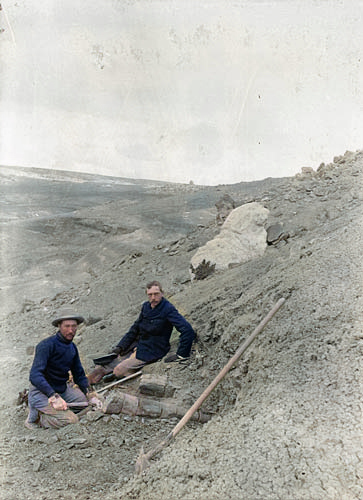 Barnum Brown (left) and Henry Osborn at Como-Bluff during the American Museum of Natural History expedition of 1897. At front – limb bone of Diplodocus

On February 12, 1873, paleontologist Barnum Brown, commonly referred to as Mr. Bones, was born. He is best known for his discovery of the first documented remains of Tyrannosaurus rex during a career that made him one of the most famous fossil hunters working from the late Victorian era into the early 20th century.

Brown was named after the circus entrepreneur P. T. Barnum. He was born into a farming family, but spent most of his time, not out in the fields, but preferred to spend his time studying, with his main interest lying in Natural sciences. He began studying at the University of Kansas in 1890, but dropped out before graduating to collect fossils and trade them. In 1894 he began to excavate fossils under the supervision of the paleontologist Samuel Wendell Williston and participated in the recovery of a Triceratops skull.

During his career, he was sponsored by the American Museum of Natural History to trade fossils in general. He became known as a collector who obtained everything that was of scientific value. In the late 19th century, Brown led an expedition to the Hell Creek Formation of Southeastern Montana. From Hell Creek, he wrote:

“Quarry No. 1 contains the femur, pubes, humerus, three vertebrae and two undetermined bones of a large Carnivorous Dinosaur not described by Marsh. . . . I have never seen anything like it from the Cretaceous. These bones are imbedded in flint-like sandstone concretions and require a great deal of labor to extract.” 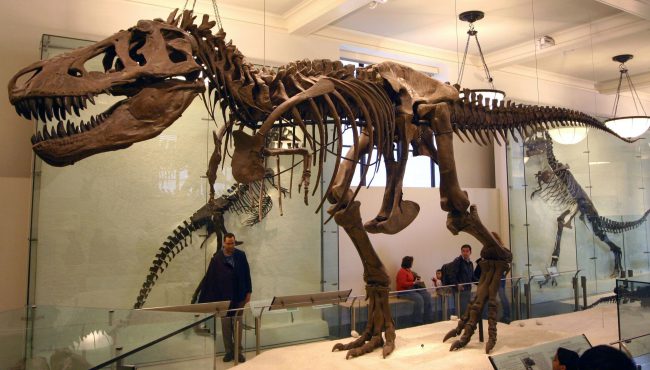 This “large Carnivorous Dinosaur” was no other than Tyrannosaurus rex. He managed to discover and excavate the first documented remains of its partial skeleton in 1902. An even better preserved skeleton was found six years later and both were put on display at the American Museum of Natural History. However, the skeleton found in 1902 was shipped to the Carnegie Museum in Pittsburgh. Henry Fairfield Osborn, president of the American Museum of Natural History, named the second skeleton Tyrannosaurus rex in 1905. The generic name is derived from the Greek words τύραννος (tyrannos, meaning “tyrant”) and σαῦρος (sauros, meaning “lizard”). Osborn used the Latin word rex, meaning “king”, for the specific name. The full binomial therefore translates to “tyrant lizard the king” or “King Tyrant Lizard“, emphasizing the animal’s size and perceived dominance over other species of the time. According to the conception at that time the T-Rex was represented strongly upright, which could be revised by newer realizations and comparisons in nature (among other things with birds). Purely on the basis of its appearance, the foundation was laid for the attitude that the T-Rex was a hunter. 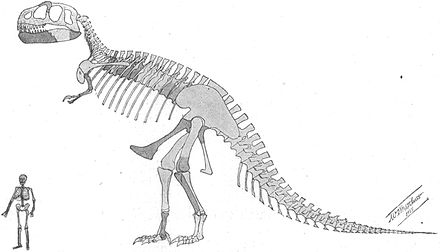 However, specimen have already been found earlier. Teeth from what is now documented as a Tyrannosaurus rex were found in 1874 by Arthur Lakes near Golden, Colorado. In the early 1890s, John Bell Hatcher collected postcranial elements in eastern Wyoming. The fossils were believed to be from the large species Ornithomimus grandis (now Deinodon) but are now considered Tyrannosaurus rex remains. In 1892, Edward Drinker Cope found two vertebral fragments of large dinosaur.[5] Cope believed the fragments belonged to an “agathaumid” (ceratopsid) dinosaur, and named them Manospondylus gigas, meaning “giant porous vertebra“, in reference to the numerous openings for blood vessels he found in the bone. The M. gigas remains were, in 1907, identified by Hatcher as those of a theropod rather than a ceratopsid. It was Brown, who found another partial skeleton in the Hell Creek Formation in Montana in 1902, comprising approximately 34 fossilized bones. 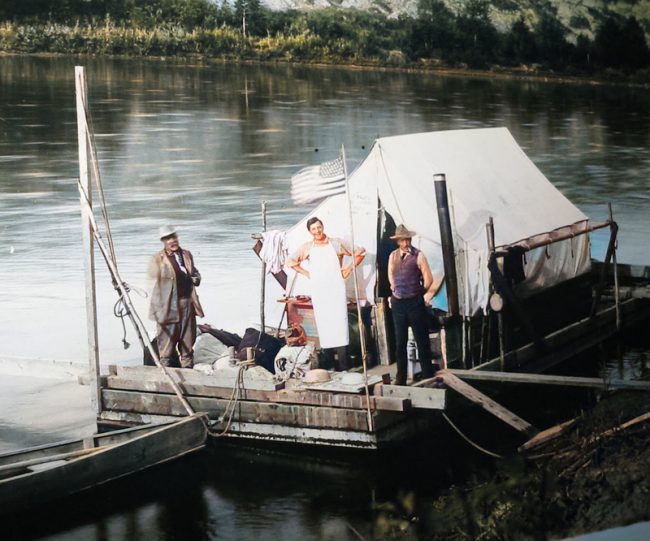 In early 1923, Brown travelled with his then-wife Lilian to Yangon, the capital of what was then Burma. Brown focused his fossil prospection along areas of Pondaung Sandstone. A mandible with three teeth was recorded and catalogued at an exposure of sandstone outside of the town of Mogaung. He did not recognise the significance of his find until 14 years later, when Edwin H. Colbert, of the American Museum of Natural History, identified the fossil as a new species of primate and the earliest known anthropoid in the world. He named the holotype Amphipithecus mogaungensis, or the ape-like creature of Mogaung. There is however considerable debate regarding its status as a primate and the lack of fossils compounds this issue.

Brown lived at the tail end of an unprecedented age of scientific discovery, and was one of its more colorful practitioners. At dig sites in Canada, Brown was frequently photographed wearing a large fur coat. During World War I and II, he worked as an “intelligence asset.” During his many trips abroad he wasn’t above picking up spare cash acting as a corporate spy for oil companies. Brown’s second wife, Lilian MacLaughlin Brown, wrote a book of  (1950), about her expeditions with her husband. She also wrote Bring ’em back petrified (1950) about a Guatemala expedition, and Cleopatra Slept Here (1951). Brown died on February 5, 1963, at age 89 and was buried in Oxford, New York, the hometown of his first wife.