You are here: Home › biology › Alfred Russel Wallace and the Natural Selection 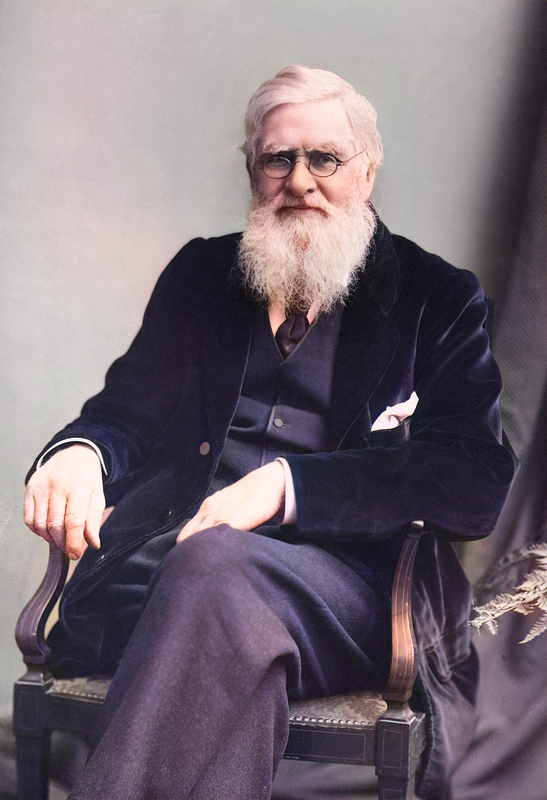 On January 8, 1823, British naturalist, explorer, geographer, anthropologist, and biologist Alfred Russel Wallace was born. He is best known for independently conceiving the theory of evolution through natural selection; his paper on the subject was jointly published with some of Charles Darwin‘s writings in 1858. This prompted Darwin to publish his own ideas in On the Origin of Species [5,6].

“Every species has come into existence coincident both in space and time with a pre-existing closely allied species.”
— Alfred Russel Wallace, “On the Law which has Regulated the Introduction of New Species” (1855).

Alfred Russel grew up in Kensington Cottage near Usk, Monmouthshire, England (now Wales). At the age of only 14, Wallace probably had to drop out of school due to financial issues and began working for a land-surveying business. Along with his brother, he moved to to the Neath area of Wales and it is widely believed that his interest in natural history started out there. It is assumed that he wanted to be able to identify the plants he saw while surveying and bought several books on the topic and also began collecting several plants. Wallace became a teacher in drafting, surveying, English, and arithmetic at the Collegiate School in Leicester, where he was able to increase his knowledge in natural history. It is believed that he met the amateur naturalist Henry Walter Bates in the school’s library who got Wallace passionate about collecting and studying beetles as well.

Wallace and Bates in Brazil

In about 1845, Wallace read Robert Chambers‘ anonymously published controversial book Vestiges of the Natural History of Creation and at that time, it is assumed, he was convinced of the reality of evolution. He suggested to Bates that they travel to Brazil in order to collect specimens of insects, birds and further animals, both for their private collections and to sell to collectors and museums in Europe. In Brazil, they soon split up, because they had different views on the expedition and Wallace focused his activities in the middle Amazon and Rio Negro, drafting a map of the river. His work was later published by the Royal Geographical Society, London and became the standard map of the region for several years.[1,2]

Wallace and the Sarawak Law Paper

In the early 1850s, Wallace wanted to return to Britain, but due to an accident almost his entire notes and collections were destroyed and he received much less than expected. However, Wallace set off for another expedition to the Malay Archipelago and spent almost eight years in the region. Wallace managed to collect about 110,000 insects, 7500 shells, 8050 bird skins, and 410 mammal and reptile specimens, including probably more than 5000 species new to science. While in Sarawak, Borneo, Wallace wrote what was probably the most important paper on evolution prior to the discovery of natural selection. His Sarawak Law paper is believed to have influenced Charles Lyell so much that he started a species notebook in which he began to contemplate the implications of evolutionary change [4]. Further it is then believed that Lyell visited Charles Darwin, who explained his theory of natural selection to Lyell for the first time. Lyell encouraged Darwin to publish his findings quick before another scientist (like Wallace) would do so first and Darwin began to write his influential book on evolution. [1,3]

Interestingly, Wallace wrote an essay explaining his ideas on natural selection and asked Darwin to pass it on to Charles Lyell, who was already a highly respected scientist. At that time, Wallace was probably not aware of the fact that Darwin had discovered natural selection previously. It is assumed that Darwin asked Lyell and also Hooker what to do about this delicate situation and they decided to present Wallace’s essay – without asking for his permission – along with two unpublished excerpts from Darwin’s writings to a meeting of the Linnean Society of London in 1858. These events led Darwin to abandon writing his big book and instead publish an ‘abstract of what he had written. This abstract was published in 1859 with the famous title ‘On the Origin of Species‘. [1,2]

At the end of the 1860s and in the 1870s Wallace was very concerned about the financial security of his family. During his time in the Malay Archipelago, the sale of his copies had earned him a considerable sum of money that had been carefully invested by the agent who had sold them. When Wallace returned to Britain, he made various bad investments in railways and mines, losing most of his fortune and relying on the income from his publication The Malay Archipelago. Despite the help of his friends, he was unable to obtain permanent employment with a fixed salary, such as that of a museum director. To remain solvent, he worked as an evaluator of official examinations, wrote 25 publications between 1872 and 1876 for a moderate sum, and was paid by Lyell and Darwin for his help in editing some of their own works.

In November 1886, Wallace made a ten-month trip to the United States to give a series of popular lectures. Most of the lectures were on Darwinism (evolution and natural selection), but he also had discussions on biogeography, spiritualism, and socio-economic reforms. In his book Darwinism of 1889, Wallace used information from his trip to America and those he had compiled for his lectures. In 1891 he published a theory in English and American Flower, according to which the ice ages could explain different similarities between the flora of Europe, Asia and North America.

Alfred Russel Wallace died on 7 November 1913 at the age of 90 in his country house Old Orchard.