You are here: Home › communication › The RMS Britannia and the Transatlantic Postal Service 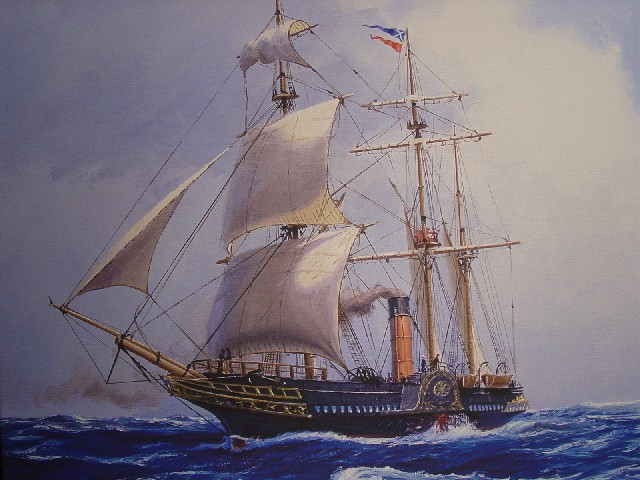 On July 4, 1840, the RMS Britannia started her maiden voyage to Halifax, Nova Scotia from Liverpool, England. With the ocean liner of the British and North American Royal Mail Steam Packet Company, later known as Cunard Steamship Company, the first regularly operating transatlantic postal service between Europe and America was established.

Today, oversea’s communication is no problem at all. No matter via phone, skype, or email, you’ll reach the receiver on the other side of the world in an instant thanks to modern global telecommunication networks. But, when we go back in time, this of course was not always the case. What do you think, how long did it take in the times of the Roman empire to transport a letter from Rome to the farthest end of the empire? You would be rather surprised to learn that the Romans already installed a relay postal service, called the ‘cursus publicus’ on their more than 10,000 km network of imperial roads throughout their whole empire. For the transport of a message on the cursus publicus, historians report an average speed of 50-100 km per day including necessary ship voyages, as e.g. when a message was sent from Rome to Alexandria in Egypt. Thus, a message travelling east to Alexandria could take more than 60 days to reach its destination [1]. Cursus publicus and was provided with light carriages (rhedæ) pulled by fast horses. At intervals of about 7 to 14 km, separate post and rest stations, called Mansio, were set up for the change of horses. By the time of Diocletian, a parallel service was established with two-wheeled carts (birotæ) pulled by oxen. This service was reserved for government correspondence. Yet another service for citizens was later added.With the downfall of the Roman Empire also the postal service declined.

In the High Middle Ages, communication in Europe was dominated by three institutions: the Catholic Church, the rulers in the various countries, and European long-distance trade. The central control of the church in Rome (1309-1378 in Avignon) and the frequent papal elections forced a constant correspondence with the dioceses. This also included the integration of monasteries, which maintained their own messenger services. The German-Roman rulers and the kings in France and England also needed central communication in their countries. As a rule, however, they only used foot messengers, which sometimes also used hired horses from hostels on roads or river ships. In 1505, Holy Roman Emperor Maximilian I established a postal system in the Empire, appointing Franz von Taxis to run it. The Thurn und Taxis family, then known as Tassis, had operated postal services between Italian city states from 1290 onward. When Philipp I of Austria became Castilian king  in November 1504, Franz von Taxis extended the postal lines as far as Castile. In 1516 he received from the Spanish king and later emperor Charles V the privilege of a chief postmaster of the Netherlands. The postal courses were extended as required to Rome, Naples, Verona and other cities. At the beginning, the post office was closed to private correspondence. Only letters and small goods from the dynastic area were allowed to be transported. After 1520 the transport of private mail on the Dutch Postal Course took on such a volume that it was first tacitly tolerated and finally approved. In addition to letters and similar items, Swiss Post also transported people who travelled from post station to post station accompanied by a horse and changed riding horses in the process. Following the abolition of the Empire in 1806, the Thurn and Taxis postal system continued as a private organisation into the postage stamp era before finally being absorbed into the postal system of the new German Empire after 1871.

For transatlantic mail transport, the British Government started operating monthly mail brigs from Falmouth, Cornwall, to New York in 1756. These ships carried few non-governmental passengers and no cargo. In 1818, the Black Ball Line opened a regularly scheduled New York – Liverpool service with clipper ships, beginning an era when American sailing packets dominated the North Atlantic saloon-passenger trade that lasted until the introduction of steamships. The RMS Britannia was together with her sisters, Acadia, Caledonia, and Columbia the first steamship ocean liner of the British and North American Royal Mail Steam Packet Company, later known as Cunard Steamship Company. She was launched on 5 February 1840, at the yard of Robert Duncan & Company in Greenock, Scotland, and was a large ship for the period, 63 m long and 10.3 m across the beam, with three masts. She had paddle wheels and engine had a power output of about 740 indicated horsepower. She was relatively fast for the time: her usual speed was about 8.5 knots (16 km/h), but she could do better if the winds and currents were favourable. She was capable of carrying 115 passengers with a crew of 82.

The Maiden Voyage of the RMS Britannia

On her maiden voyage on July,4 1840, she made Halifax, Nova Scotia from Liverpool, England in 12 days and 10 hours, continuing on to Boston, Massachusetts. Her first homeward run from Halifax to Liverpool was made in just under 10 days at an average speed of about 11 knots (20 km/h), setting a new eastbound record which lasted until 1842. The most famous passenger of the RMS Britannia was Charles Dickens, who in January 1842 travelled to the United States. Unfortunately, he was seasick for most of the voyage and returned home on a traditional sailing ship. However, with the RMS Britannia the delay for transatlantic postal service could be minimized to 10-14 days only and for most of the next 30 years, the Cunard Steamship Company held the Blue Riband for the fastest Atlantic voyage.

At yovisto academic video search you can learn more about the history of telecommunication in an AT&T documentary with the title ‘Communication is just the beginning‘.