You are here: Home › literature › Franz Kafka – A struggle between “Bureau” and literary vocation 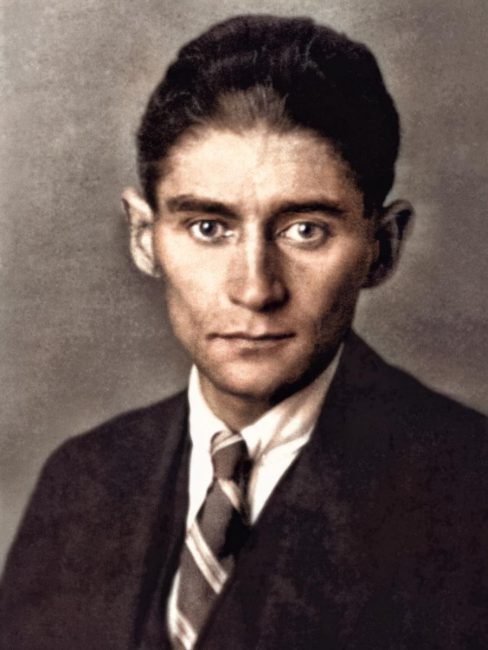 On July 3, 1883, German-speaking Bohemian Jewish novelist and short-story writer Franz Kafka was born. Kafka’s works are counted among the canons of world literature. For the description of his unusual way of portrayal a separate word has developed: “kafkaesque“. Most of Kafka’s works were published after his death and against his last will and testament by Max Brod, a close friend and confidant whom Kafka had appointed as executor.

“As Gregor Samsa awoke one morning from uneasy dreams he found himself transformed in his bed into an enormous insect.”
– Frank Kafka, Metamorphosis (1915)

Franz Kafka was born in 1883 in Josefov in the Jewish quarter of the city of Prague, then capital of the Bohemian province, which is part of the Austro-Hungarian Empire. His family name Kafka means choucas in Czech (kavka). He is the son of Hermann Kafka  (1852-1931) and Julie Kafka, born Löwy (1856-1934), from a rich family of Poděbrady. His paternal grandfather, Jacob Kafka, came from Osek, a Czech provincial town, to set up a small business in Prague. Kafka belonged to the minority of Prague’s population whose mother tongue was German. While Kafka dealt extensively with his relationship with his father in letters, diaries and prose texts, his relationship with his mother was rather in the background. From 1889 to 1893 Kafka attended the German Boys’ School at the Fleischmarkt in Prague. Then, in accordance with his father’s wishes, he went to the German-language humanistic state high school in Prague’s old town, Palais Goltz-Kinsky. Kafka was regarded as a preferential pupil. Nevertheless, his school days were overshadowed by great fears of failure. Even as a pupil, Kafka was occupied with literature. After passing the school-leaving examination (Matura) in 1901 with “satisfactory”, the 18-year-old left Bohemia for the first time in his life and travelled with his uncle Siegfried Löwy to Norderney and Helgoland.

Kafka began his university studies, from 1901 to 1906 at the Karl-Ferdinands-University in Prague, with chemistry. After a short time he moved in the legal direction; then he tried it with a semester of German language and literature and art history. Then he even considered continuing his studies in Munich in 1903, in order to finally stay with the study of law. In accordance with the programme, he completed this after five years with a doctorate, which was followed by an obligatory one-year unpaid legal internship at the State and Criminal Courts. After almost a year of employment with the private insurance company “Assicurazioni Generali” (October 1907 to July 1908), Kafka worked from 1908 to 1922 in the semi-public “Workers’ Accident Insurance Institution for the Kingdom of Bohemia in Prague”. He often referred to his service as “his bread and butter profession”. Kafka’s activity required precise knowledge of industrial production and technology. The 25-year-old made proposals on accident prevention regulations. Outside his service, he showed political solidarity with the working class; at demonstrations he attended as a passer-by, he continued to wear a red carnation in his buttonhole. At first he worked in the accident department, later he was transferred to the underwriting department. His tasks included writing instructions for use and technical documentation. In recognition of his achievements, Kafka was promoted four times, in 1910 to the position of a principist, in 1913 to vice-secretary, in 1920 to secretary, and in 1922 to secretary general. To his friend the writer and translator Milena Jesenská he wrote: “My service is ridiculous and miserable easy […] I don’t know why I get the money.“

“Someone must have been telling lies about Joseph K., for without having done anything wrong he was arrested one fine morning. His landlady’s cook, who always brought him his breakfast at eight o’clock, failed to appear on this occasion. That had never happened before.”
– Franz Kafka, The Trial (1920)

The First World War brought new experiences when thousands of East Jewish refugees arrived in Prague. As part of the “Warrior Welfare” program, Kafka took care of the rehabilitation and vocational retraining of severely wounded persons. He had been obliged to do so by his insurance company, which had, however, previously claimed him to be an “irreplaceable specialist” and thus protected him (against Kafka’s intervention) from the front, after he had been classified for the first time in 1915 as militarily “fully usable”. Kafka experienced the other side of this appreciation two years later when he fell ill with pulmonary tuberculosis and asked for retirement: The institution closed itself down and only released him finally after five years on 1 July 1922.

Kafka and the Women – Felice Bauer

Kafka never married. According to his friend Max Brod, Kafka was “tortured” by sexual desire and Kafka’s biographer Reiner Stach states that his life was full of “incessant womanising” and that he was filled with a fear of “sexual failure”. In addition, he had close relationships with several women during his life. On 13 August 1912, Kafka met Felice Bauer, a relative of Brod, who worked in Berlin as a representative of a dictaphone company. After a total of about three hundred letters and six brief encounters, the official engagement in Berlin took place in June 1914 – but only six weeks later, the engagement was officially declared. 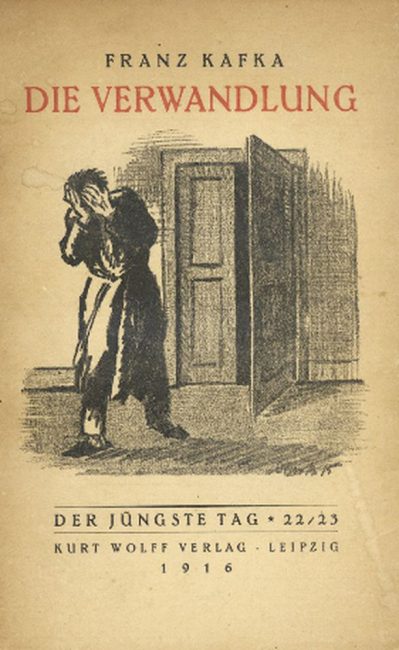 From the Judgement to the Process

In the night from 22 to 23 September 1912, Kafka succeeded in putting the story The Judgement on paper in just eight hours in one go. According to later literary scholars, Kafka found herself here at one fell swoop thematically and stylistically. Kafka was electrified by the act of writing, which had never before been experienced so intensively. The story was first published in Leipzig in 1912 and dedicated “to Miss Felice Bauer”, and in subsequent editions “for F. In 1912, Kafka wrote “Die Verwandlung” (“The Metamorphosis“), published in 1915 in Leipzig. The story begins with a travelling salesman waking to find himself transformed into an ungeheures Ungeziefer, a monstrous vermin, Ungeziefer being a general term for unwanted and unclean animals. Critics regard the work as one of the seminal works of fiction of the 20th century. The story “In der Strafkolonie” (“In the Penal Colony“), dealing with an elaborate torture and execution device, was written in October 1914, revised in 1918, and published in Leipzig during October 1919. The story “Ein Hungerkünstler” (“A Hunger Artist“), published in the periodical Die neue Rundschau in 1924, describes a victimized protagonist who experiences a decline in the appreciation of his strange craft of starving himself for extended periods. He began his first novel in 1912; its first chapter is the story “Der Heizer” (“The Stoker“). Kafka called the work, which remained unfinished, Der Verschollene (The Man Who Disappeared), but when Brod published it after Kafka’s death he named it Amerika. During 1914, Kafka began the novel Der Process (The Trial), the story of a man arrested and prosecuted by a remote, inaccessible authority, with the nature of his crime revealed neither to him nor to the reader. Kafka did not complete the novel, although he finished the final chapter. 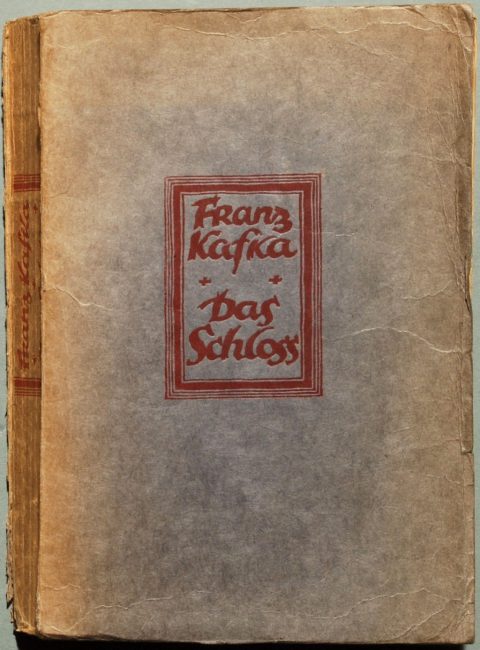 After years of writing difficulties, Kafka started the novel Das Schloss (The Castle) in February 1922, presumably after a health breakdown, during a recreational stay in the Krkonoše Mountains in Spindleruv Mlyn. In March he presented the work to his friend Max Brod Kafka spent the summer in Plan in West Bohemia for further recreation, where he continued the novel. On 1 July 1922 he was finally retired, as he was no longer expected to be able to work. In autumn he had to go back to Prague, the health problems increased. Kafka finally put the novel fragment aside after this interruption. The protagonist is the Landvermesser (land surveyor) named K., who struggles for unknown reasons to gain access to the mysterious authorities of a castle who govern the village. Kafka’s intent was that the castle’s authorities notify K. on his deathbed that his “legal claim to live in the village was not valid, yet, taking certain auxiliary circumstances into account, he was to be permitted to live and work there”. Dark and at times surreal, the novel is focused on alienation, bureaucracy, the seemingly endless frustrations of man’s attempts to stand against the system, and the futile and hopeless pursuit of an unobtainable goal.

In August 1917 Franz Kafka suffered a nightly haemorrhage. Pulmonary tuberculosis was diagnosed, a disease that was not curable at the time. The symptoms initially improved again, but in the autumn of 1918 he fell ill with the Spanish flu, which led to pneumonia lasting several weeks. Thereafter, Kafka’s health deteriorated from year to year, despite numerous long stays at the spa. During a stay at the Sanatorium Wienerwald in April 1924, Dr. Hugo Kraus, a family friend and head of the lung clinic, was diagnosed with laryngeal tuberculosis.  As a result of the progressive emaciation, the symptoms could only be alleviated; surgical intervention was no longer possible due to the poor general condition.  Franz Kafka left and died on 3 June 1924 in the Hoffmann Sanatorium in Kierling near Klosterneuburg at the age of 40.

Kafkas’s friendship with Max Brod was of great importance to him throughout his adult life. Brod believed irrevocably in Kafka’s literary genius and repeatedly encouraged and urged him to write and publish. He supported his friend by mediating the first book publication with the young Leipzig publisher Rowohlt Verlag. As Kafka’s executor, Brod prevented the burning of his novel fragments against Kafka’s will.