You are here: Home › explorer › From Ambition to Obsession – Jane Franklin and the Lost Franklin Expedition 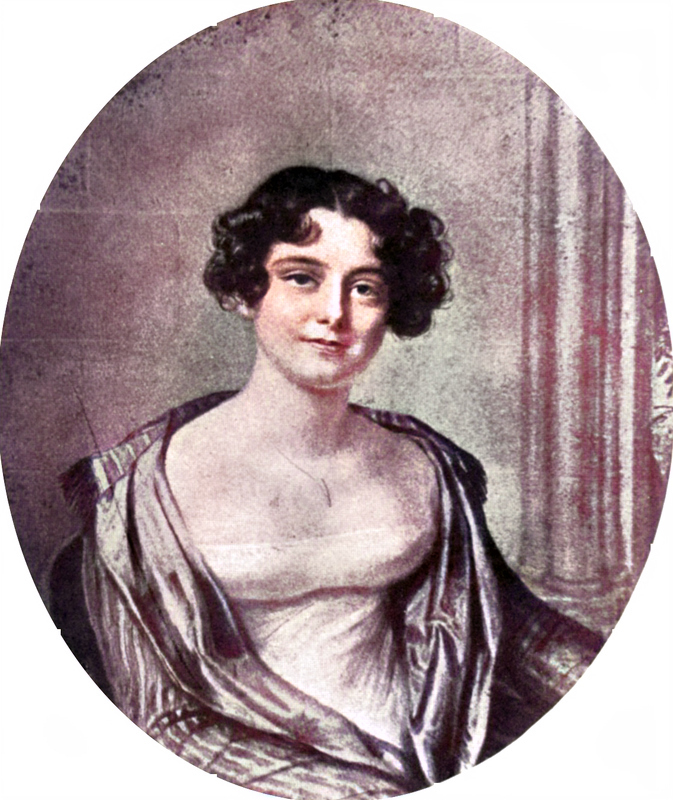 On December 4, 1791, Lady Jane Franklin, Tasmanian pioneer, traveler and second wife of the explorer Sir John Franklin, was born. She was the first woman to climb Mount Wellington and to travel overland from Melbourne to Sydney. Above all Lady Franklin is remembered for the search she organized from 1850 to 1857 for Sir John Franklin‘s lost Arctic expedition.

Jane Franklin was born as Jane Griffin, the second daughter of John Griffin, a liveryman and later a governor of the Goldsmith’s Company, and his wife Jane Guillemard. She was born in London, where she was raised with her sisters Frances and Mary. She was well educated, and her father being well-to-do had her education completed by much travel on the continent. As a young woman, Jane had been strongly attracted to a London physician and scientist, but nothing ever came of their relationship. She had been a friend of John Franklin’s first wife, Eleanor Anne Porden, who died early in 1825.

In 1828, Jane Griffin became engaged to John Franklin and became his wife. But, during the next three years, after Franklin was knighted, she was parted for lengthy periods from her husband who was on service in the Mediterranean. In 1836, Franklin was appointed lieutenant-governor of Tasmania and the couple had to leave for the Southern colony. Lady Franklin at once began to take an interest in the colony and did a good deal of exploring along the southern and western coast. In 1839, she became the first European woman to travel overland between Port Phillip and Sydney. Besides charitable work at the side of her husband including her encouragement to the founding of secondary schools, as e.g. Christ’s College, in 1841-42, she was the first woman to climb Mount Wellington and also the first European woman to travel overland from Hobart to Macquarie Harbour. Thus, Lady Jane Franklin gained much popularity in the Australian colonies until her husband was called back to England in 1843.

In May 1845, her husband started on his last voyage, the ill-fated British Arctic expedition of 1845. Franklin had served on three previous Arctic expeditions. His fourth and last, undertaken when he was 59 years old, was meant to traverse the last unnavigated section of the Northwest Passage.[4] After a few early fatalities, the two ships became icebound in Victoria Strait near King William Island in the Canadian Arctic. The entire expedition complement, including Franklin and 128 men, was lost. When it was realized back home in England that he must have come to disaster, Lady Franklin devoted herself for many years to trying to ascertain his fate.

Overall, she sponsored seven expeditions to find her husband or his records between 1850 and 1875. Lady Franklin also participated in these actions with her private fortune, and among other things increased the reward for saving or clarifying the fate of the men by 10,000 pounds sterling (according to today’s monetary value a good million euros). It invested almost its entire assets in financing a total of five rescue expeditions. She supported the voyages of the schooner Prince Albert under the captains Charles Forsyth (1850) and William Kennedy (1851) as well as the steamboat Isabel under Captain Edward Inglefield (1852). These expeditions, as well as the much more extensive undertakings of the Royal Navy, were largely unsuccessful in clarifying the final fate of Franklin. During these years Lady Franklin collected all imaginable information about the Arctic, and was right with her assumptions that Franklin had probably tried his luck further south near Victoria Island.

In 1854, nine years after the departure of Franklin’s ships, however, the Royal Navy officially declared Franklin and his men dead and refused to send any further expeditions in view of the enormous losses of men and material to the search troops and the expanding Crimean War. In addition, this year the Scottish researcher John Rae received extremely disturbing reports based on Inuit statements suggesting that Franklin’s men all died in the King-William Island area trying to get to safety by land, probably using the “last resort” of cannibalism, which was unimaginable at the time.

Lady Franklin refused to acknowledge this report and in the following period sharply criticized Rae in public discussions in newspapers and magazines, and she also found great support from the public opinion of her time, among others also by Charles Dickens.[5] According to her statements, she still felt hope of seeing her husband alive again. The still young mass media increasingly took up the topic, and so the sympathy for the sad fate of the heroic Lord Franklin and his faithful wife was very great. Her efforts made the expedition’s fate one of the most vexed questions of the decade. Finally, in 1857 Lady Franklin, with the help of donations, raised enough money again to finance another expedition. Francis Leopold McClintock, who had already taken part in the Navy’s first expeditions as an officer, set sail with the small steam yacht Fox on 2 July, and finally found the shocking remains of the expedition in 1859 in the area around King William Island described by John Rae, including a letter deposited in a pile of stones stating that Lord Franklin had already died on 11 June 1847.

Until her death in 1875, Lady Franklin was obsessed with the fate of the Franklin expedition and its remains and succeeded to find sponsors for followup search expeditions. Lady Franklin was a woman of unusual character and personality. Her determined efforts, in connection with which she spent a great deal of her own money to discover the fate of her husband, incidentally added much to the world’s knowledge of the arctic regions. In retrospect, the search expeditions to clarify Franklin’s fate have made an enormous contribution to the exploration of the Arctic. In 1860, the Royal Geographical Society awarded Lady Franklin the Founder’s Gold Medal, the first woman to do so.

Behind the Labels – Jane Franklin, [8]