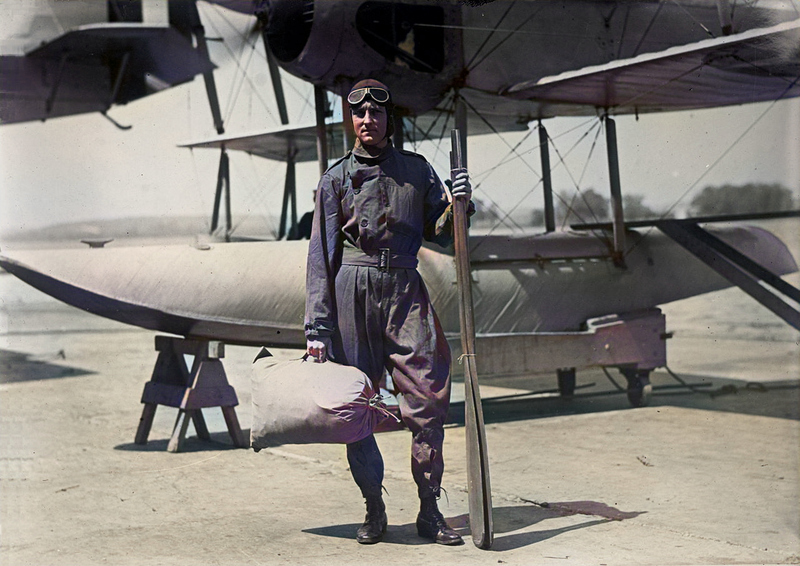 On March 11, 1957, US-American explorer and aviator Richard Evelyn Byrd Jr. passed away. A pioneering American aviator he claimed to be the first man to fly over both of the Earth’s poles. Aircraft flights in which he served as a navigator and expedition leader crossed the Atlantic Ocean, a segment of the Arctic Ocean, and a segment of the Antarctic Plateau.

Richard Evelyn Byrd was born in 1888 in Winchester, Virginia, USA, the son of Esther Bolling (Flood) and Richard Evelyn Byrd Sr., descendants of one of the First Families of Virginia. After attending the Virginia Military Institute for two years, he went to the University of Virginia. However, drawn by financial circumstances, Byrd decided to leave university and to enter the United States Naval Academy at the age of 20. During his time at the Naval Academy, he suffered two injuries from sports activities. Although he was allowed to remain at the Academy, his injuries eventually led to his forced retirement from the Navy in 1916. In 1912, Byrd graduated from the Naval Academy and was commissioned an ensign in the United States Navy. Shortly after the entry of the United States into the First World War in April 1917, Byrd oversaw the mobilization of the Rhode Island Naval Militia. He was then recalled to active duty and was assigned to the Office of Naval Operations and served in a desk job as secretary and organizer of the Navy Department Commission on Training Camps. It is assumed that his passion for aviation evolved during World War I when he learned how to fly. At the naval aviation school at Pensacola, Florida, he qualified as a naval aviator 1918.

Soon, Byrd became a flight instructor for the US Navy. Due to Byrd’s expertise in aerial navigation, the aviator was appointed to plan the flight path for the U.S. Navy’s 1919 aerial transatlantic crossing. This mission was historic, as it was the first time the Atlantic Ocean was crossed by an aircraft. Of the three flying boats that started from Newfoundland, only Lieutenant Commander Albert Read’s flying boat completed the trip on May 18, 1919, achieving the first transatlantic flight. In 1921, Byrd volunteered to attempt a solo nonstop crossing of the Atlantic Ocean, prefiguring Charles Lindbergh‘s historic flight by six years.[6] However, Byrd’s ambition was dashed by then acting Secretary of the Navy Theodore Roosevelt, Jr., who felt the risks outweighed the potential rewards of the attempt. Due to reductions in the Navy after the First World War, Byrd reverted to the rank of lieutenant at the end of 1921. Byrd then commanded the aviation unit of the arctic expedition to North Greenland led by Donald B. MacMillan from June to October 1925. [1] During this expedition, Byrd made the acquaintance of Navy Chief Aviation Pilot Floyd Bennett and Norwegian pilot Bernt Balchen. Bennett served as his pilot in his flight to the North Pole the next year. Balchen, whose knowledge of arctic flight operations proved invaluable, was the primary pilot on Byrd’s flight to the South Pole in 1929.

In 1926, Richard Byrd and pilot Floyd Bennett attempted a flight over the North Pole in a Fokker F-VII Tri-motor monoplane called Josephine Ford. The crew took off at Spitsbergen and covered about 1.360 miles in less than 16 hours. The pilots claimed to have reached the North Pole and when they returned to the United States from the Arctic, Byrd became a national hero. Congress passed a special act on December 21, 1926, promoting him to the rank of commander and awarding both Floyd Bennett and him the Medal of Honor. Also, his claims enabled him to secure fundings for an attempt to fly over the South Pole. However, with the years, heated controversies evolved about whether the pilots were actually able to reach the North Pole. Most of the critics brought to attention that the Josephine Ford may not have had enuogh speed and winds to accomplish a flight from Spitzbergen to the North Pole and back in less than 16 hours. Since then, many publications try to reveal the truth around Byrd’s flight, but there are still open questions. [2,3] Floyd Bennett later even declared, “Byrd and I never got the North Pole.” Some time after takeoff, they noticed that the engines were losing oil. Therefore they flew back to Spitsbergen. After a while the leaking stopped. They then flew back and forth for 14 hours near Spitsbergen and only then returned to Kings Bai, where Amundsen was still busy with preparations for his own flight.[8] Further explorers claiming to have made the first successful expedition to the North Pole were Robert E. Peary [5] and Frederick Cook.

One year after the controversal flight, Richard Byrd announced to have the financial backings to attempt to win the Orteig Prize for making the first nonstop flight between the United States and France. He announced Floyd Bennett again as his chief pilot. However, during a practice, the Fokker Trimotor airplane crashed, injuring Bennett and Byrd. While the plane was going through repairs, Charles Lindbergh won the prestigous prize on May 21, 1927. [4,6]

In 1928, Richard Byrd set himself another goal. He wanted to reach the South Pole by flight. With the expedition that consisted of two ships and three planes he established base camp called “Little America” on Ross Ice Shelf, from which many foot, sled and airplane expeditions were launched. The famous South Polar flight took place on November 28, 1929. The trip was financed by John D. Rockefeller, Edsel Ford, the American Geographical Society, the National Geographic Society and the New York Times, among others. New York Times journalist Russell Owen was the first to report the success of the polar flight directly from Antarctica. To avoid the same mistakes he did during previous expeditions, Byrd paid special attention to data collection. Despite several difficulties during the adventure, Richard Byrd’s expedition was probably the first to reach the South Pole by air. Due to his success, Byrd took part in four more Antarctic expeditions and he managed to survive 5 winters alone while operating a meteorological station. [4]

Overall, Byrd led three more expeditions (1933-1935, United States Antarctic Service Expedition (1939-1941), and Operation Highjump (1946-1947)) to Antarctica, which succeeded in exploring and recording almost the entire coast and large inland portions. In the process, Byrd discovered Marie Byrd Land – like the Marie Byrd Seamount – named after his wife, Thurston Island, the Ford Ranges, and the Rockefeller Plateau. His last expedition, Operation Highjump (1946-1947), was the largest in Antarctic history up to that time and also a U.S. Navy maneuver involving 4,000 men and 13 warships and civilian vessels, intended to explore and map parts of Antarctica for military purposes, but was aborted prematurely with the loss of several aircraft carried. A senior officer in the United States Navy, Byrd also served on active duty during World War II. He was recalled to active duty in 1942, and served as a confidential advisor to Admiral Ernest J. King. From 1942 to 1945, he served on the South Pacific Island Base Inspection Board, which had important duties in the Pacific, including the examination of remote islands for airfields.

As part of the multinational collaboration for the International Geophysical Year (IGY) 1957-58, Byrd was appointed officer in charge of U.S. Navy Operation Deep Freeze I in 1955-56, which established permanent Antarctic bases in McMurdo Sound, Bay of Whales, and the South Pole. This was Byrd’s last voyage to Antarctica. Richard E. Byrd died in his sleep of a heart ailment at the age of 68 on March 11, 1957, at his home in Boston.

Conducting Science in Antarctica with the Admiral Byrd Expeditions, [12]