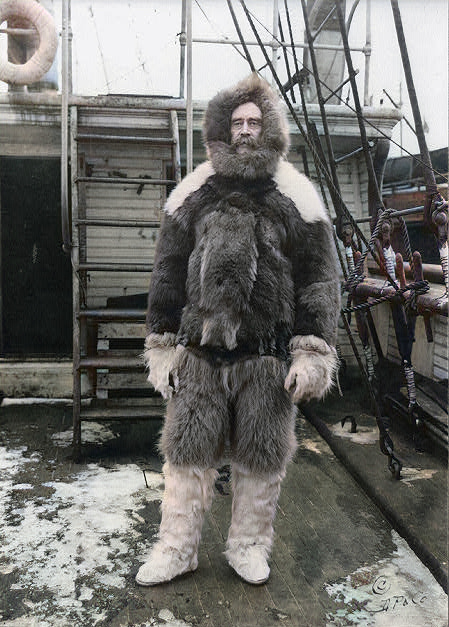 On February 20, 1920, American polar explorer Robert Edwin Peary passed away. Peary made the first successful expedition to the North Pole arriving 6 Apr 1909 with his assistant Matthew Henson and four Inuit eskimo companions. Peary’s claim was widely credited for most of the 20th century, rather than the competing claim by Frederick Cook, who said he got there a year earlier. Both claims were widely debated in newspapers until 1913.

“Nothing easier. One step beyond the pole, you see, and the north wind becomes a south one.”
– Robert Peary [8]

Robert Peary was born in Cresson, Pennsylvania on May 6, 1856, to Charles N. and Mary P. Peary. Peary attended Bowdoin College, north of Portland, Maine, where his mother has moved after the death of Peary’s father in 1859. Peary graduated in 1877 with a civil engineering degree and then worked as a draftsman making technical drawings in Washington, DC, at the US Coast and Geodetic Survey office. He joined the United States Navy in 1881 as a civil engineer with the relative rank of lieutenant. Three years later, he began his career in exploration as chief assistant on a surveying expedition to Nicaragua. Although he was initially assigned to duty in the tropics, he resolved to become the first man to reach the North Pole.

In April 1886 he wrote a paper for the National Academy of Sciences proposing two methods for crossing Greenland’s ice cap. Between 1886 and 1897, Robert Peary led five expeditions to Greenland and Arctic Canada. In his 1891 expedition, Peary returned to Greenland with seven companions, including Frederick A. Cook, who in 1909 would claim to have reached the North Pole before Peary. On this expedition Peary sledged 2,100km to northeastern Greenland, discovered Independence Fjord, and found evidence of Greenland’s being an island. He also studied the “Arctic Highlanders,” an isolated Eskimo tribe who helped him greatly on later expeditions.[2] Peary was promoted to the rank of lieutenant commander on January 5, 1901, and to commander on April 6, 1902.

Between 1898 and 1902 Peary explore routes to the pole from Etah, in Inglefield Land, northwestern Greenland, and from Fort Conger, Ellesmere Island, in the Canadian Northwest Territories. He departed New York Harbor for the Arctic in July 1898. By August, his ship was icebound after crossing Smith Sound, nearly 1,100km from the pole. While establishing and supplying a base on the edge of the Polar Sea, Peary had both feet badly frozen and suffered the amputation of eight toes. Robert Peary stayed in the Arctic until the fall of 1902 carrying out an extensive exploration of the region and in the spring of 1902 made the nearest approach yet to the pole in the American Arctic, 84°17′ north.[3]

The farthest North anyone had ever reached

In September 1903, supported by president Theodore Roosevelt, Robert Peary was given three years leave to pursue another attempt on the pole. A problem in the previous attempt was the lack of a ship capable of forcing a passage through the ice to a high enough latitude for a cross-polar dash. Peary’s Arctic Club raised $100,000 for the expedition and built such a ship, the Roosevelt. This time the explorers would use Eskimo methods and clothing, and travel in individual dog sledges. In July 1905 the Roosevelt sailed north from New York and reached the north coast of Grant Land by September. Peary struck out for the pole from Cape Hecla in March 1906. However, after two weeks of travel across broken ice fields, and open leads, the conditions of his dogs and his declining food supply forced him and his associates to turn back. Nevertheless, he reached latitude 87° 6’ north, 280km from the pole and the farthest north anyone had ever reached.[3] 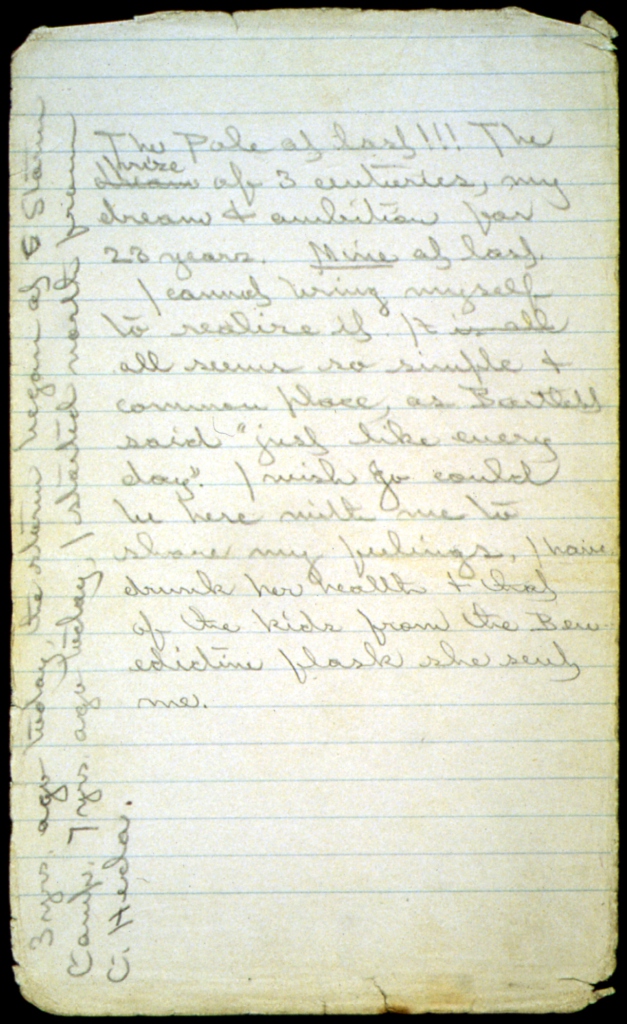 Admiral Peary’s diary entry for arrival at the North Pole

For his final expedition to reach the Pole, Peary and 23 men set off from New York City on July 6, 1908 aboard the Roosevelt. They wintered near Cape Sheridan on Ellesmere Island, and from Ellesmere departed for the pole on February 28 – March 1, 1909. The last support party was turned back from “Bartlett Camp” on April 1, 1909, in latitude no greater than 87°45′ north. On the final stage of the journey toward the North Pole, Peary continued with five assistants, none capable of making navigation observations. On April 6, 1909, he established “Camp Jesup” allegedly within 8 km of the pole. 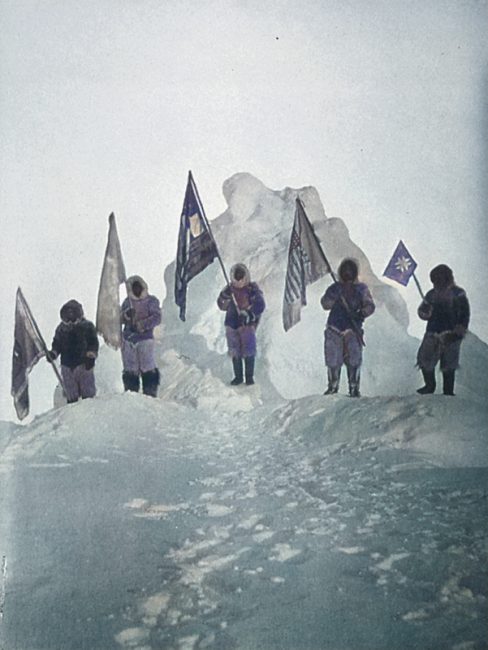 Did he or did he not?

Peary returned to civilization only to discover that his former colleague, Cook, who had been a surgeon on the 1891–1892 Peary expedition, was claiming to have reached the North Pole independently in April 1908. Cook’s claim, though subsequently discredited, marred Peary’s enjoyment of his triumph. In 1911 Peary retired from the navy with the rank of rear admiral. Peary’s claim to have reached the North Pole was almost universally accepted, but in the 1980s the examination of his 1908–09 expedition diary and other newly released documents cast doubt on whether he had actually reached the pole.[3]

Donal Manaham, Exploration of the Poles, [8]