You are here: Home › physics › Klaus von Klitzing and the Quantum Hall Effect 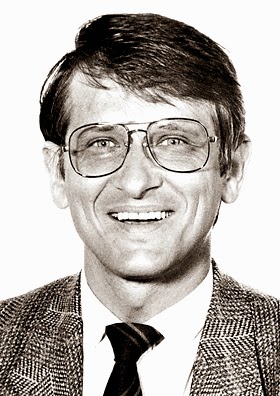 On February 5, 1980, German physicist Klaus von Klitzing discovered the Quantum Hall Effect in the high field magnet laboratory of Grenoble, France, for which he was granted the 1985 Nobel Prize in Physics.

OK, today we have a topic that is a little bit complicated to explain, at least to us being non-physicists. Let’s start with the ‘traditional’ Hall effect. The Hall effect is the production of a voltage difference (the Hall voltage) across an electrical conductor, transverse to an electric current in the conductor and a magnetic field perpendicular to the current. It was already discovered in the 19th century by American physicist Edwin Herbert Hall. As a young doctoral student in 1879 Edwin H. Hall discovered an unexpected phenomenon. He found that if a thin gold plate is placed in a magnetic field at right angles to its surface an electric current flowing along the plate can cause a potential drop at right angles both to the current and the magnetic field (see figure 1). Termed the Hall effect, this takes place because electrically charged particles (in this case electrons) moving in a magnetic field are influenced by a force, called the Lorentz force, and deflect laterally. The Hall effect can be used to determine the density of charge carriers (negative electrons or positive holes) in conductors and semi-conductors, and has become a standard tool in physics laboratories the world over.

Hall performed his experiments at room temperature and with moderate magnetic fields. At the end of the 1970’s researchers used extremely low temperatures (only a few degrees from absolute zero, i.e. around -272°C) and very powerful magnetic fields (max approx. 30 T). They studied the Hall effect in the type of semiconductor design used in the electronics industry for manufacturing low-noise transistors. The quantum Hall effect is a quantum-mechanical version of the Hall effect, observed in two-dimensional electron systems subjected to low temperatures and strong magnetic fields, in which the Hall conductivity undergoes certain quantum Hall transitions to take on the quantized values.

The integer quantization of the Hall conductance was originally predicted already in 1975 by Ando, Matsumoto, and Uemura on the basis of an approximate calculation which they themselves did not believe to be true. Several researchers subsequently observed the effect in experiments carried out on the inversion layer of MOSFETs. In 1980 the German physicist Klaus von Klitzing discovered in a similar experiment that the Hall resistance does not vary in linear fashion, but “stepwise” with the strength of the magnetic field. The steps occur at resistance values that do not depend on the properties of the material but are given by a combination of fundamental physical constants divided by an integer, i.e. the resistance is quantized.

Up to this time, nobody expected that there exists an effect like the Quantized Hall Effect, which depends exclusively on fundamental constants and is not affected by irregularities in the semiconductor like impurities or interface effects. For this finding of what is termed the integer quantum Hall effect, von Klitzing was awarded the 1985 Nobel Prize in Physics. The effect may be understood if one accepts the laws of quantum physics for how individual electrons behave in powerful magnetic fields.