You are here: Home › mathematics › Pythagoras and his Eponymous Theorem 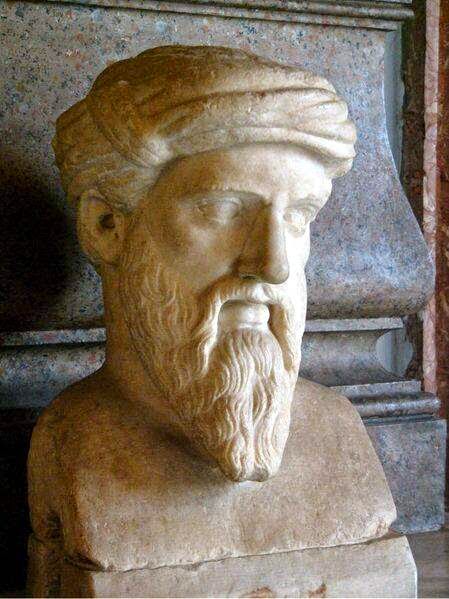 One of the founders of Western mathematics was the Greek philosopher Pythagoras of Samos. He is often revered as a great mathematician, mystic, and scientist and is best known for the Pythagorean theorem which bears his name. It was said that he was the first man to call himself a philosopher, or lover of wisdom. Anyway, his eponymous theorem possibly is the best known theorem in mathematics.

Accurate facts about the life of Pythagoras are so few that most information concerning him is untrustworthy, making it nearly impossible to provide more than a vague outline of his life. Herodotus, Isocrates, and other early writers all agree that Pythagoras was born on Samos, the Greek island in the eastern Aegean, as the son of Mnesarchus, a gem-engraver or a merchant from Tyre, and his wife Pythais. As to the date of his birth, Aristoxenus stated that Pythagoras left Samos in the reign of Polycrates, at the age of 40, which would give a date of birth around 570 BC.

Little is known of Pythagoras‘s childhood. Certainly he was well educated, learning to play the lyre, learning poetry and to recite Homer. There were, among his teachers, three philosophers who were to influence Pythagoras while he was a young man. One of the most important was Pherekydes who many describe as the teacher of Pythagoras. The other two who shoud introduce him to mathematical ideas were Thales and his pupil Anaximander who both lived on Miletus. It is said that Pythagoras visited Thales in Miletus when he was between 18 and 20 years old, while Thales already was an old man and. Nevertheless he he created a strong impression on Pythagoras and contributed to Pythagoras’s interest in mathematics and astronomy. He advised him to travel to Egypt to learn more of these subjects. Thales’s pupil, Anaximander, lectured on Miletus and Pythagoras attended these lectures. Anaximander certainly was interested in geometry and cosmology and many of his ideas would influence Pythagoras’s own views.[1].

Pythagoras left Samos for Egypt in about 535 B.C. to study with the priests in the temples. Many of the practices of the society he created later in Italy can be traced to the beliefs of Egyptian priests, such as the codes of secrecy, striving for purity, and refusal to eat beans or to wear animal skins as clothing. [2] According to current research, it is not easy to say how much Pythagoras learned from the Egyptian priests, or indeed, whether he learned anything at all from them. According to Porphyry, Pythagoras was refused admission to all the temples except the one at Diospolis where he was accepted into the priesthood after completing the rites necessary for admission.[1] He took part in several discussions with the Egyptian priests and possibly embraced the various customs of Egyptian priests such as secrecy, not eating beans and wearing clothes that are not made from animal skins. During his time in Egypt, he pursued his education and specialized in Geometry and Mathematics.

In 525 BC Cambyses II, the king of Persia, invaded Egypt and Pythagoras was taken prisoner and taken to Babylon. It was about 520 BC when Pythagoras returned to Samos and after a short interlude went to southern Italy in about 518 BC. There, Pythagoras founded a philosophical and religious school in Croton that had many followers. Pythagoras was the head of the society with an inner circle of followers known as mathematikoi. The mathematikoi lived permanently with the society, had no personal possessions and were vegetarians. They were taught by Pythagoras himself and obeyed strict rules. The outer circle of the Society were known as the akousmatics and they lived in their own houses, only coming to the Society during the day. They were allowed their own possessions and were not required to be vegetarians.[1]

Since the fourth century AD (according to Proclus, the last major Greek philosopher), Pythagoras has commonly been given credit for discovering the Pythagorean theorem, a theorem in geometry that states that in a right-angled triangle the area of the square on the hypotenuse (the side opposite the right angle) is equal to the sum of the areas of the squares of the other two sides. While the theorem that now bears his name was known and previously utilized by the Babylonians and Indians, he, or his students, are often said to have constructed the first proof. Because of the secretive nature of his school and the custom of its students to attribute everything to their teacher, there is no evidence that Pythagoras himself worked on or proved this theorem. For that matter, there is no evidence that he worked on any mathematical or meta-mathematical problems.

According to legend, the way Pythagoras discovered that musical notes could be translated into mathematical equations was when he passed blacksmiths at work one day and thought that the sounds emanating from their anvils were beautiful and harmonious and decided that whatever scientific law caused this to happen must be mathematical and could be applied to music. He went to the blacksmiths to learn how the sounds were produced by looking at their tools. He discovered that it was because the hammers were “simple ratios of each other, one was half the size of the first, another was 2/3 the size, and so on.”

Pythagoras went to Delos in 513 BC to nurse his old teacher Pherekydes who was dying. He remained there for a few months until the death of his friend and teacher and then returned to Croton. In 510 BC Croton attacked and defeated its neighbour Sybaris and there is certainly some suggestions that Pythagoras became involved in the dispute. Then in around 508 BC the Pythagorean Society at Croton was attacked by Cylon, a noble from Croton itself. Pythagoras escaped to Metapontium and the most authors say he died there, some claiming that he committed suicide because of the attack on his Society.[1]